Growing the right crop in the right place within an impaired watershed can achieve significant water quality improvements, according to Penn State researchers, who conducted a novel study in the drainage of a Susquehanna River tributary in an agricultural area in southeastern Pennsylvania.

The research may reveal a potential path for restoring the troubled Chesapeake Bay, said Patrick Drohan, associate professor of pedology in the College of Agricultural Sciences and one of the study's authors. The bay — which long has been impaired in large part by nutrients and sediment washing off crop fields and getting into surface waters that feed it — needs bold solutions, such as changing cropping systems, he suggested.

“Other than when wastewater treatment plants came into compliance in the Chesapeake Bay watershed, no other ‘practice’ has been shown to have as large an effect on nitrogen, phosphorus and sediment reductions as simply reallocating existing crop percentages to less risky landscapes,” he said. “Even without additional best management practices, just moving row crops such as corn and soybeans away from streams and off steep slopes can make a huge difference.”

The research — conducted in the 52-square-mile Conewago Creek watershed that drains parts of Lancaster and Dauphin counties — was led by Fei Jiang, a recent soil science doctoral degree graduate and current postdoctoral scholar in the Department of Entomology. Jiang deployed a powerful computer program called the Soil and Water Assessment Tool to model crop growth and losses of total nitrogen, total phosphorus and sediment for an eight-year period, from 2010-2017. 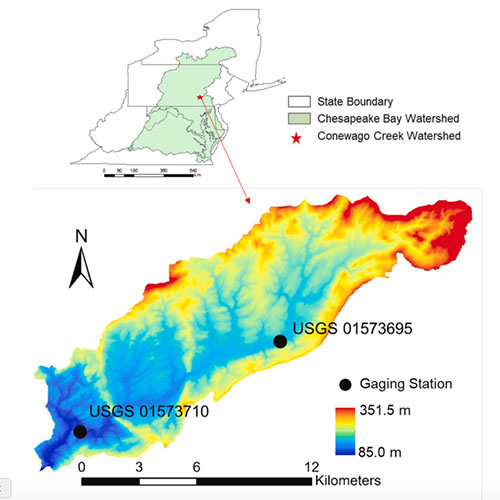 The location of the 52-square-mile Conewago Creek drainage within the Chesapeake Bay watershed is shown in this graphic. The stream is monitored by two U.S. Geological Survey gauging stations, that provided data for the research. IMAGE: Patrick Drohan/Penn State

Then, based on those model results, she developed an innovative algorithm to spatially reallocate crop rotations within existing agricultural land to reduce total nitrogen, total phosphorus and sediment losses based on soil properties, while maintaining a similar production area for each rotation. Hay was reallocated onto landscapes most vulnerable to erosion and nutrient loss, whereas corn-soybean rotations were reallocated onto less vulnerable areas.

Considered to be a pollution “hot spot” in the Chesapeake Bay watershed, the Conewago Creek drainage was an ideal place to perform the experiment, Jiang noted. The stream carries high nutrient and sediment loads in a watershed with a high percentage of agricultural land use. She said she hopes the study opens a dialogue that results in real improvements for the bay.

“Originally, I worried that this research will be seen as too theoretical, that farmers will never change what they grow and where they grow it, and the research wouldn’t have any real meaning,” she said. “But given the sharp reductions in pollution that we have shown are possible with this fresh approach, I think people will be convinced to consider giving it a try. This model is actually doable in real life.”

The concept of concentrating production in certain areas and replacing existing crops with alternatives in other areas is new in the United States but has been the subject of considerable experimentation in the European Union, Drohan pointed out. In countries such as Ireland and the Netherlands, scientists are exploring the potential of a soil-based, land-use framework to achieve economic and environmental targets in agriculturally dominated watersheds. 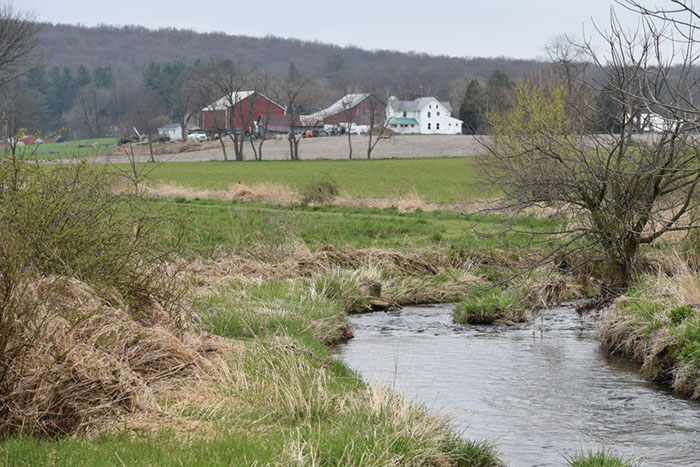 “The agricultural norm is for farmers to dictate what, when and where to plant based on market demand and the most economically efficient use of land resources for the individual farm enterprise,” he said. “The EU is exploring a different approach in impaired watersheds; however, this framework has not been tried in the United States.”

The results of this study suggest that redistributing crop rotations within the Chesapeake Bay watershed might achieve needed, substantial water-quality benefits that so far have eluded policymakers implementing other practices, Drohan noted. But the devil will be in the details.

“Future research is needed to understand how this approach affects farm-level factors, because implementation may require some farmers to change the type of crops they grow and how profits are shared,” he said. “Models for how farmers could cooperate exist from several different fisheries around the world — such models are referred to as co-management strategies. Economic payment or incentive strategies, such as the EU’s Common Agricultural Payment scheme, also could be explored to incentivize cooperation as an alternative to the USDA farm bill.”