Raising awareness and offering technological tools to the thousands of citizens groups in the U.S. that monitor water quality might help community leaders tap these volunteers as a way to improve access to plentiful, clean water and possibly avoid water-related crises, according to a team of researchers.

“These programs are important, they are important to the people who take part in the programs, and they’re important to the public,” said John Carroll, distinguished professor of information sciences and technology and an associate of the Institute for Computational and Data Sciences. “However, the work is not very visible. We wondered, how could we help to make this important work more visible, which might make it more effective, even more fun, and improve recruiting efforts and sustainability?”

One of the ways to help these groups gather data is to give them better tools and training, according to the researchers, who reported their findings in an online issue of the journal Interacting with Computers. Most of the groups used standard spreadsheet tools to manage the data they collected.

"Many groups have a lot of valuable data, but the data is underutilized because of cumbersome and inappropriate tools,” said Carroll. “Spreadsheet programs are wonderful, but not for managing large and dynamic datasets or for visualizing geospatial time series."

Carroll also said that communities should also try to raise awareness of these groups and their work.

“Many people in our community may not be aware that citizen water-quality-monitoring projects are going on,” said Carroll. “The citizen volunteers are modest folks, serving the community, and engaged in what they are doing, but it would be good for the rest of us to know more about them and their activities.”

He added that raising awareness could help water monitoring groups attract more volunteers and better coordinate with other government and civic groups.

According to the researchers, the groups use a range of techniques to measure and monitor water quality, including surveying the population of insects, such as mayflies, that can serve as signs of healthy water systems. They also measure stream velocity, temperature, and collect water samples for analysis.

Carroll said the programs promote other benefits for communities. The members of the water monitoring groups are disproportionately older adults, suggesting a new way for elders to serve and strengthen the community. 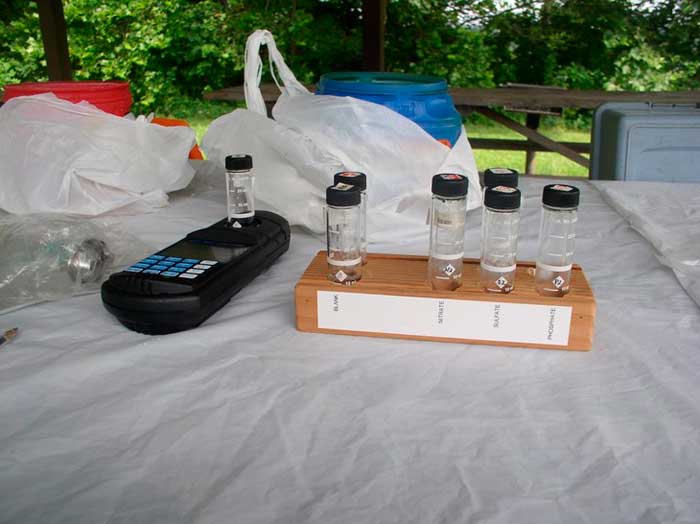 Citizen scientists use devices, such as Hach DR850 colorimeter, to monitor water quality. The device is used to measure various chemicals parameters present in a water sample.  The sample cells for each measurement are placed in the sample cell holder. IMAGE: CCPaSEC

“The segment of society that is older or retired is growing rapidly,” said Carroll. “People are living longer, but not necessarily retiring later; retirement can be a significant phase of life that can last several decades.”

Volunteering can offer health benefits for many of these seniors.

“People who gather water data are regularly hiking in the woods, and wading in streams to take samples and measurements; it’s an intellectual activity, a physical activity and a meaningful activity,” he said.

In a separate study conducted by Claremont McKenna College and Oregon State scholars in 2018, the number of people engaged in this sort of activity statistically predicts the quality of local water.

“The correlation is encouraging and suggests that citizen water monitoring is an activity contemporary communities should encourage,” Carroll said.

As an example of the importance of close monitoring of water resources, Carroll points to recent infrastructure- and climate-related problems that led to disasters. In Flint, Michigan, the declining state of the water system’s infrastructure contributed to lead-tainted water. Climate change and legal and political frameworks in how water was allocated led to intermittent shortages in Cape Town, South Africa.

According to Carroll, the presence of a university, in this case, Penn State, plays a role in inspiring water quality work. However, the researchers have found that water monitoring is a growing national phenomenon. In Pennsylvania, for example, there are more than 350 community watershed groups.