While on missions without access to clean water, U. S. Marines face the challenge of procuring and storing enough drinking water to sustain them. Penn State researchers, led by Chris Arges, Penn State associate professor of chemical engineering, are working toward a realistic purification option that is portable, lightweight and easy to operate.

He and co-principal investigator Christopher Gorski, Penn State associate professor of civil and environmental engineering, will use a $570,000, three-year grant from the Office of Naval Research to advance a water purification method, known as membrane capacitive deionization (MCDI).

"Although the bulk of global desalination utilizes a process known as reverse osmosis at centralized production facilities, it is not suitable for military teams, as it requires high-pressure piping and hardware and is difficult to operate in the field," Arges said. "MCDI, on the other hand, is effective, mobile and energy efficient."

Stimulated by battery- or solar-powered electricity, MCDI utilizes ion-exchange membranes and porous electrodes to separate ions, such as sodium and chloride, from water. According to Arges, the method is effective for ground or brackish water but fails to sufficiently purify more highly concentrated water sources, such as seawater. 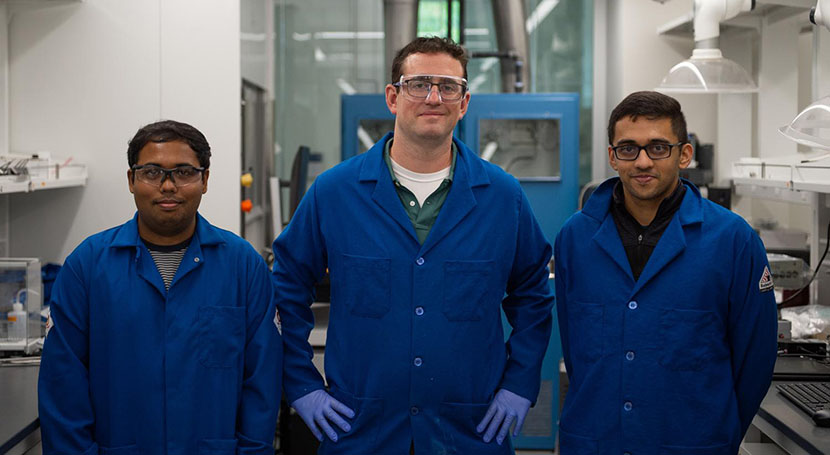 "The electricity triggers the sodium ions to migrate across the cation exchange membrane to a negatively charged electrode, while chloride ions migrate across the anion exchange membrane to a positively charged electrode, a process that is known as the principle of electrosorption," Arges said. "Capturing the ions from the liquid leads to deionized, drinkable water."

As more and more water is treated in the MCDI unit, the electrodes become saturated with salt, rendering them unable to remove as much salt from the water. At that point, Arges said, the electrodes can be regenerated by slowing down the flow of water and flipping the polarity of the cell.

"This step in the process wastes some of the water but it also produces electrical energy that can be recovered and applied to the next desalination cycle to lower the overall energy burden," Arges said. "This allows MDCI to remain energy-efficient."

To improve MDCI's effect on more concentrated water sources, Arges and his team will redesign the electrochemical cell module used in MCDI. With tools from the Nanofabrication Lab in the Penn State Materials Research Institute, the researchers will fabricate microscopic wells in an interlocking pattern on the membrane surface. This increases the interfacial area between the membrane and electrodes, improving contact and reducing the distance that sodium and chloride ions need to travel to cross the membrane-electrode interface.

Additionally, the wells enable the electrode material to store more sodium and chloride ions. This allows users to purify water for longer periods of time before resorting to regeneration. If successful, the improved MCDI unit could purify not just ground and brackish water, but seawater, too, Arges said.

In previous research, Arges and his team successfully used similar membrane patterning to separate hydronium and hydroxide ions from water in bipolar membranes to make oxygen and hydrogen in an electrolysis cell.

"Since the proposed approach for this grant has worked for us in the past, we believe the increased interfacial area will reduce ionic transport resistance, leading to cleaner water in greater quantities," Arges said.