Flow rates and time of year must be taken into account to better understand the potential risks posed by emerging organic contaminants in rivers and streams, according to Penn State researchers who studied contaminant concentrations and flow characteristics at six locations near drinking water intakes in the Susquehanna River basin.

While many studies have looked at the levels of emerging organic contaminants such as pharmaceuticals and pesticides in rivers and their effect on aquatic life, this is one of the first projects to closely correlate pollutant levels with flows, noted researcher Heather Preisendanz, associate professor of agricultural and biological engineering.

In addition, the research team documented seasonal changes in contaminant concentrations, with elevated levels of some contaminants seen in the warmer months, posing the greatest risk to fish during their spawning and early developmental stages, said Preisendanz. Her research group in the College of Agricultural Sciences has been studying emerging contaminants in surface water and groundwater since 2013. 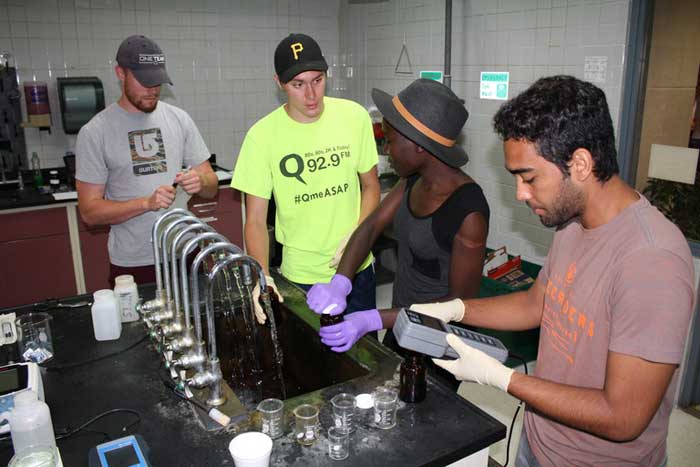 During the two-phase study, scientists looked for contaminants previously detected in Pennsylvania waters. In Phase I, all water samples were analyzed bimonthly for seven human pharmaceutical compounds, including four antibiotics — ampicillin, sulfamethoxazole, ofloxacin and trimethoprim; two analgesics — acetaminophen and naproxen; and a stimulant — caffeine. In Phase II, they conducted an intensive sampling regime at a single river site, focusing on a broader range of emerging organic contaminants.

Concentrations of emerging organic compounds were low, but they were widespread, explained lead researcher Faith Kibuye, a doctoral candidate in the Department of Agricultural and Biological Engineering when the research was conducted. 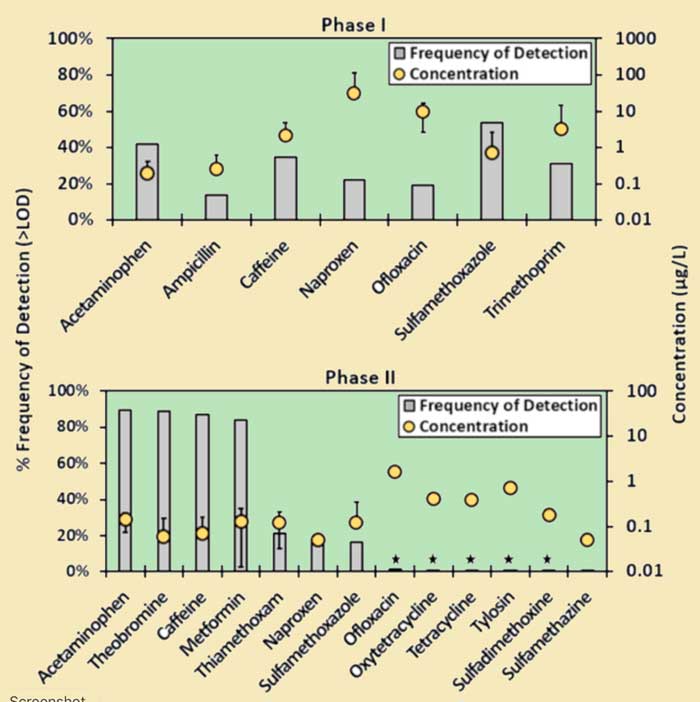 This graphic shows how often various emerging organic contaminants were found in the research, and in what concentrations. IMAGE: HEATHER PREISENDANZ RESEARCH GROUP/PENN STATE

“This is because large storm events, particularly in the spring months, mobilize emerging contaminants, such as pesticides, from agricultural fields,” Preisendanz said. “That explains the positive relationship between neonicotinoid concentrations and flow rate.”

The picture was less clear for the contaminants that have both point and nonpoint sources, Preisendanz added, because some older municipalities have combined storm and sanitary sewer systems that discharge untreated sewage during high-flow events.

Even without water quality standards to define what levels might be considered safe for various aquatic organisms and human health, the researchers calculated risk assessments for compounds found in the study using exposure limits already set by the U.S. Food and Drug Administration. Those calculations revealed that although the compounds posed medium to high risk to aquatic organisms, human health risk from drinking water or consuming fish is low. However, the study’s findings, recently published in Chemosphere, did not determine the risks due to the presence of multiple contaminants in the water simultaneously.

“We do not know the effect of being exposed to a cocktail of these compounds, even at low levels, and whether they might have a synergistic effect,” Preisendanz said.