Missions carrying humans to Mars will require on-site resources, and a project led by Planetary Science Institute (PSI) scientists Nathaniel Putzig and Gareth Morgan is mapping the availability of potential shallow water-ice sources across the surface of the Red Planet.

Two teams led by Putzig and Morgan were contracted by NASA to pursue separate mapping efforts of subsurface ice deposits in Arcadia Planitia. After their mid-term reports showed significant synergy, the teams were combined in a joint project called “Subsurface Water Ice Mapping (SWIM) on Mars,” which extends the coverage of the mapping project from an experimental swath over Arcadia Planitia to all other low elevation regions across the Martian Northern Hemisphere.

“Water ice will be a critical resource for human explorers on Mars, not only for life support but also for generating fuel to power equipment on the ground and rockets for the return journey to Earth,” said Putzig, a Senior Scientist at PSI. “Maps that identify the nature and availability of potential water resources will help determine where humanity will establish its first outposts on Mars.” 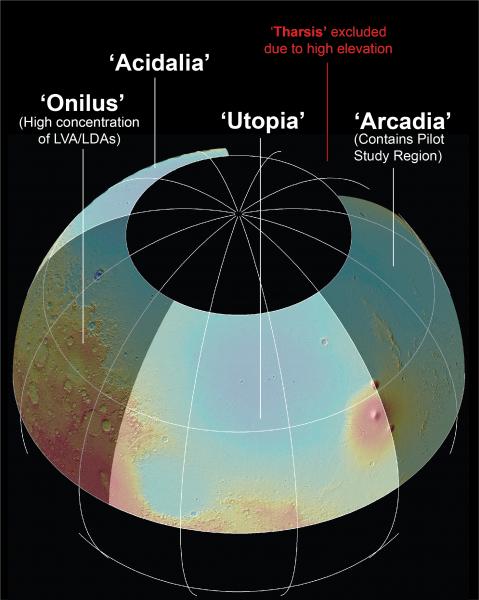 The Subsurface Water Ice Mapping project is currently studying large expanses of the northern hemisphere of Mars to identify potential shallow water-ice resources. Work is focused in the four outlined regions, all of which exhibit evidence of ice such as Lineated Valley Fill (LVF) and Lobate Debris Aprons (LDA). Credit: Gareth Morgan​.

The SWIM team is producing new maps of the likelihood of subsurface ice deposits over these regions by combining radar, thermal, neutron, altimetry, and image data from several Mars-orbiting spacecraft. The team is also employing newly developed techniques that include using radar returns to infer the presence of ice within the top 5 meters of the crust and applying advanced radar processing to improve resolution at depth and to estimate the purity of ice in the subsurface.

“The goal of the SWIM project is to provide a set of mapping products using existing spacecraft data that delineate subsurface ice in the mid-latitudes of Mars,” said Morgan, a Research Scientist at PSI. “We aim to identify and map indicators of possible subsurface ice in each data set and use a combination of all data sets to assess the likelihood of ice being present in shallow ­and deep zones, above and below 5 meters in depth.” A secondary goal is to establish the limitations of the current data sets that will inform development of follow-on missions to more precisely locate and assess water ice and other resources.

In addition to an expanded ‘Arcadia’ study region, the SWIM team has been contracted to map three other study regions. These are the ‘Acidalia,’ ‘Onilus,’ and ‘Utopia’ regions shown in the accompanying figure. Results from each of these study regions will be integrated into a single northern hemisphere ice consistency map by the end of April 2019.

Funding for this project came from a subcontract (1611855) to PSI from the Caltech Jet Propulsion Laboratory, supported by NASA. 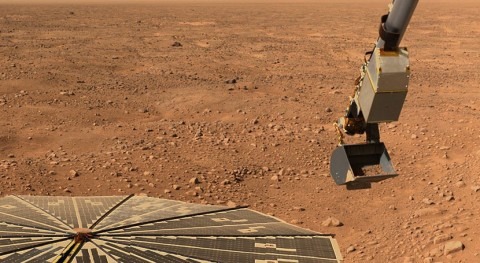 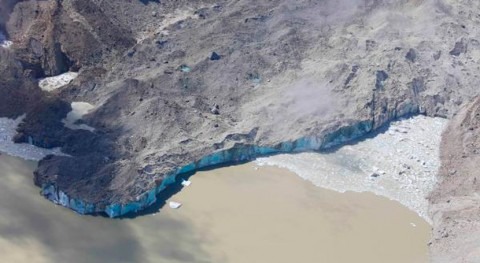