General398
Politecnico di Torino
The Politecnico di Torino, which in 2009 celebrated its 150th academic year from its foundation, has become over the years an international school, where traditions and future, past and modernity are all interlinked.
FacebookLinkedInYoutubeWeb

A study conducted at the Politecnico di Torino, in collaboration with the Massachusetts Institute of Technology (MIT), and published in the journal Energy and Environmental Science, presents a solar desalination device capable of spontaneously removing accumulated salt. In the future, this discovery could lead to the development of sustainable desalination systems with stable efficiencies over time.

The Achilles' heel of water desalination technologies is the crystallization of salt particles within the various components of the device. This clogging phenomenon causes a reduction in performance over time, thus limiting the durability of these devices. Tackling this problem is important to ensure a constant production of freshwater over time. Recently, innovative nanostructured materials with anti-clogging properties have been proposed, with the potential of limiting salt accumulation. However, the high cost of these materials makes large-scale production of commercial prototypes difficult.

Starting from this problem, a team of engineers from the Energy Department of the Politecnico di Torino (SMaLL), in collaboration with the Massachusetts Institute of Technology (MIT), has thoroughly studied the mechanisms underlying the transport of salt particles in desalination devices. The study started after noting an inconsistency between experimental observations and classical theoretical models of salt transport. In particular, the engineers of the Politecnico di Torino, after more than two years of numerical and laboratory research funded by the Compagnia di San Paolo (MITOR project) and the CleanWaterCenter (CWC), have shown that this large difference in the salt transport is due to the so-called Marangoni effect. Based on this discovery, the researchers of the Politecnico di Torino (Matteo Morciano, Matteo Fasano, Eliodoro Chiavazzo and Pietro Asinari, who also holds the position of Scientific Director of the National Institute of Metrological Research—INRiM) and of MIT (Svetlana V. Boriskina) have created a prototype capable of desalting seawater in a sustainable way and spontaneously removing the salt accumulated during operation.

The Marangoni effect is a phenomenon also present in nature, which can be observed in everyday life

The Marangoni effect is a phenomenon also present in nature, which can be observed in everyday life: "In an aqueous solution, liquid molecules interact with each other through intermolecular bonds that generate forces called 'cohesion forces.' Two solutions with different concentrations will have different cohesion forces. The presence of this concentration variation, and therefore of cohesion forces, causes the liquid to flow away from regions of low concentration, generating a re-mixing process. This effect is responsible for the 'tears' of wine that are observed on the walls of the glass when shaken.

The Marangoni effect, due to a change in concentration in the liquid, can therefore be engineered and exploited to increase the re-mixing of solutions with different concentrations. In our desalination device (where the treated solutions are based on sea water at different concentrations), this phenomenon allows to avoid the accumulation of salt in the evaporators, ensuring constant and lasting productivity of distilled water, and safeguarding the components subject to deterioration. Our strategy was therefore to design a device capable of taking full advantage of this effect, achieving a further step towards future commercial applications of the device", explains Matteo Morciano, researcher at the Energy Department of the Politecnico di Torino and first author of the research.

In the current version and considering an area for the absorption of solar energy of about one square meter, the desalination device can supply more than 15 liters of water per day. Furthermore, thanks to the Marangoni effect, the salt removal process is up to 100 times faster than predictions based on spontaneous diffusion, thus favoring a rapid restoration of the properties of the components.

The results of this research, published in the journal Energy and Environmental Science, may have important implications in the design of a new generation of desalination materials and devices, allowing them to spontaneously 'self-clean' the accumulated salt and guaranteeing stable and long-lasting performance. Further research is currently underway at the CleanWaterCenter of the Politecnico di Torino, with the aim of making the prototype industrializable and more versatile. 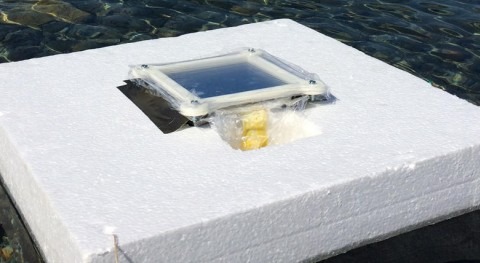