The abstract benefits of biochar for long-term storage of carbon and nitrogen on American farms are clear, and now new research from Rice University shows a short-term, concrete bonus for farmers as well.

That would be money. To be precise, money not spent on irrigation.

In the best-case scenarios for some regions, extensive use of biochar could save farmers a little more than 50% of the water they now use to grow crops. That represents a significant immediate savings to go with the established environmental benefits of biochar.

Biochar’s benefits for the long-term sequestration of carbon and nitrogen on American farms are clear, but new research from Rice University shows it can help farmers save money on irrigation as well. The study showed that sandy soil, in particular, gains ability to retain more water when amended with biochar. Courtesy of the Masiello Lab

The open-access study appears in the journal GCB-Bioenergy.

Biochar is basically charcoal produced through pyrolysis, the high-temperature decomposition of biomass, including straw, wood, shells, grass and other materials. It has been the subject of extensive study at Rice and elsewhere as the agriculture industry seeks ways to enhance productivity, sequester carbon and preserve soil.

“There’s a lot of biochar research that focuses mostly on its carbon benefits, but there’s fairly little on how it could help stakeholders on a more commercial level,” said lead author and Rice alumna Jennifer Kroeger, now a fellow at the Science and Technology Policy Institute in Washington, D.C. “It’s still an emerging field.”

The researchers used their formulas to reveal that regions of the country with sandy soils would see the most benefit, and thus the most potential irrigation savings, with biochar amendment, areas primarily in the southeast, far north, northeast and western United States.

The study analyzes the relationship between biochar properties, application rates and changes in WHC for various soils detailed in 16 existing studies to judge their ability to curtail irrigation.

The researchers defined WHC as the amount of water that remains after allowing saturated soil to drain for a set period, typically 30 minutes. Clay soils have a higher WHC than sandy soils, but sandy soils combined with biochar open more pore space for water, making them more efficient.

WHC is also determined by pore space in the biochar particles themselves, with the best results from grassy feedstocks, according to their analysis.

In one comprehensively studied plot of sandy soil operated by the University of Nebraska-Lincoln’s Agricultural Water Management Network, Kroeger calculated a specific water savings of 37.9% for soil amended with biochar. Her figures included average rainfall and irrigation levels for the summer of 2019.

The researchers noted that lab experiments typically pack more biochar into a soil sample than would be used in the field, so farmers’ results may vary. But they hope their formula will be a worthy guide to those looking to structure future research or maximize their use of biochar.

More comprehensive data for clay soils, along with better characterization of a range of biochar types, will help the researchers build models for use in other parts of the country, they wrote. 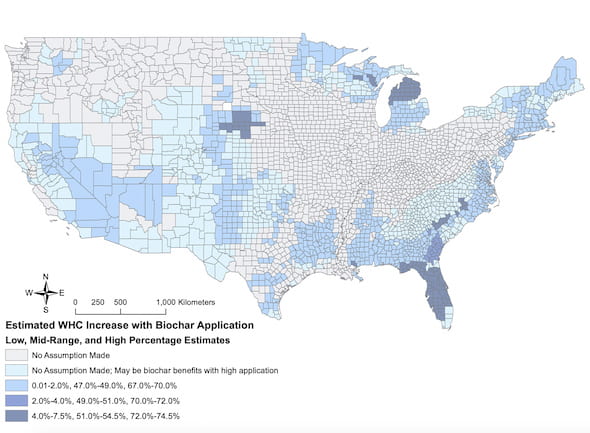 A map shows low, mid-range and high estimates for theoretical water-holding capacity changes in soil with the addition of biochar. A study by Rice University scientists showed how biochar can help curtail excess irrigation in agriculture, depending on the type of soil and biochar characteristics. Courtesy of the Masiello Lab

“This study draws attention to the value of biochar amendment especially in sandy soils, but it’s important to note that the reason we are calling out sandy soils here is because of a lack of data on finer-textured soils,” Masiello said. “It’s possible that there are also significant financial benefits on other soil types as well; the data just weren’t available to constrain our model under those conditions.”

How water turns into ice — with quantum accuracy
END_OF_DOCUMENT_TOKEN_TO_BE_REPLACED