'Water plants are a nuisance in streams, blocking the flow. You should remove them'. This notion has for many years determined how streams were managed to prevent flooding during high rainfall events. Research by NIOZ scientist Loreta Cornacchia, published in the journal Proceedings of the Royal Society B, in cooperation with Utrecht University and British and Belgian partners, shows how vegetation in streams can actually buffer water levels, by adjusting vegetation cover. By adapting the patterning of plant clumps to changes in discharge, river plants can both counter flooding as well as prevent drying out, thereby protecting biodiversity. Cornacchia: ‘They provide a natural buffer against hydrological changes.’

‘The implications for water management are huge’, says Cornacchia. The current strategy of plant removal does not only threaten a naturally balanced water level, it also threatens a stream’s biodiversity. Inland waters are freshwater hotspots for biodiversity and vegetation is its guardian. It provides habitats and food for invertebrate and fish, helps stabilize the river banks, and removes excess nutrients from the water.

Surprisingly, during extensive empirical research and sampling at two stream sites in the United Kingdom, the researchers observed that plant cover adjustments led to a more constant water level and flow regime. Cornacchia: ‘We actually observed that the plants determined the water flow, rather than the other way around. In this way, submerged aquatic vegetation in rivers ensures that organisms that depend on the aquatic environment to persist can remain in the stream year-round.’

At high flows, the vegetation is pushed to the side or even dislodged, keeping an open lane in the middle for high-flow traffic. During periods of low flows, aquatic plants gradually clog up the stream, and thereby prevent the water from draining quickly. This so-called self-organization process counteracts the variation in waterflow that streams experience through the seasons.

Changes in climate and land use

Geraldene Wharton, Professor at Queen Mary University of London in the UK and co-author of the study, adds: ‘There are a range of hydrological impacts on rivers linked to changes in climate and land use. Some rivers may experience increases in flood magnitudes and flood frequencies but there may also be increases in low flow conditions - more hydrological extremes.  Our research shows the important buffering capacity of instream vegetation against both low flows and high flows which also maintains healthy ecosystems: a nature-based solution to flow regulation.’ 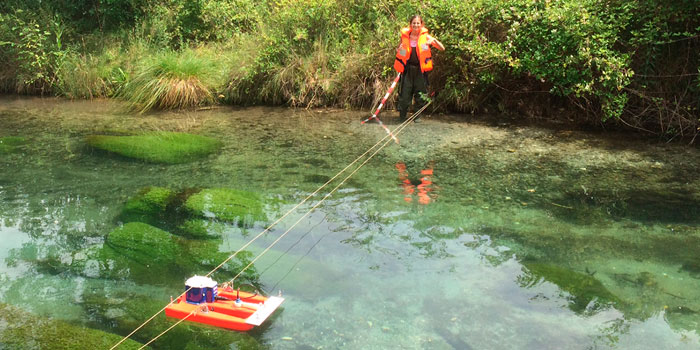 During extensive empirical research and sampling at two stream sites, the team observed that the plants determined the water flow. Photo: Loreta Cornacchia

Cornacchia: ‘Our findings open up the way towards a more nature-based approach to the control of water levels that harnesses natural processes rather than human control to maintain biodiversity hotspots.’ An approach that is especially relevant in the light of a predicted increase in heavy rainfall and drought through climate change. The vegetation’s ability to adapt through self-organization shows great potential to mitigate the effects of both floods and low water levels. Cornacchia: ‘Insight in self-organizing plants and understanding their role in ecosystem resilience is essential in a future governed by global change.’

A dam right across the North Sea 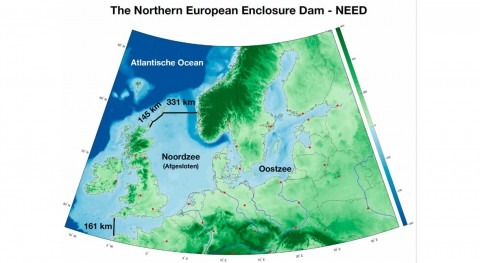