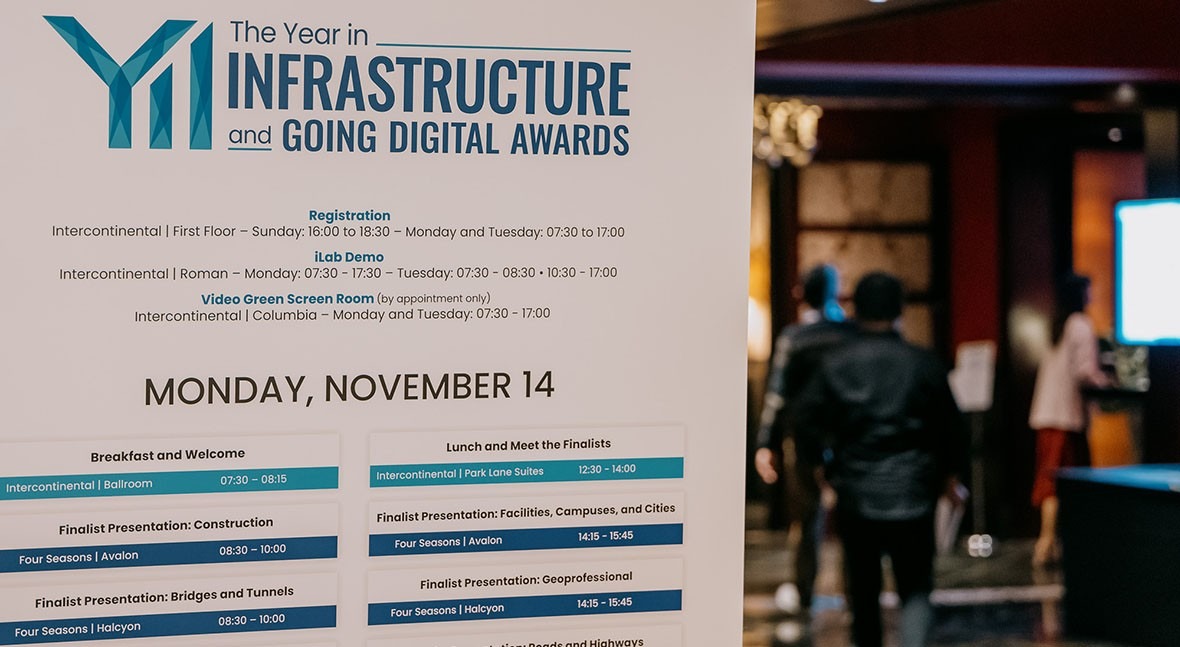 The Year in Infrastructure Conference and Going Digital Awards 2022 organized by Bentley Systems started this past Monday in London, coming back as an in person event after two years of online events due to the pandemic.

Most of day 1 of the conference was devoted to presentations from the project finalists. Although there is one category specifically devoted to water, we have been able to learn about other interesting water-related projects in other categories. They include the project to modernize the Bakun hydroelectric plant with a digital twin, in Malaysia, by Sarawak Energy Berhad, a finalist under the Process and Power Generation category, as well as two projects in the Surveying and Monitoring category: Brazil’s largest 3D sanitation map, in Rio de Janeiro, by Aegea, and the Murray Dam condition assessment, in San Diego County, U.S., by HDR.

In the afternoon we heard from the three finalists in the Water and Wastewater category, from Singapore, India, and the UK. Alejandro Maceira, Director of Smart Water Magazine, is a juror for this category. 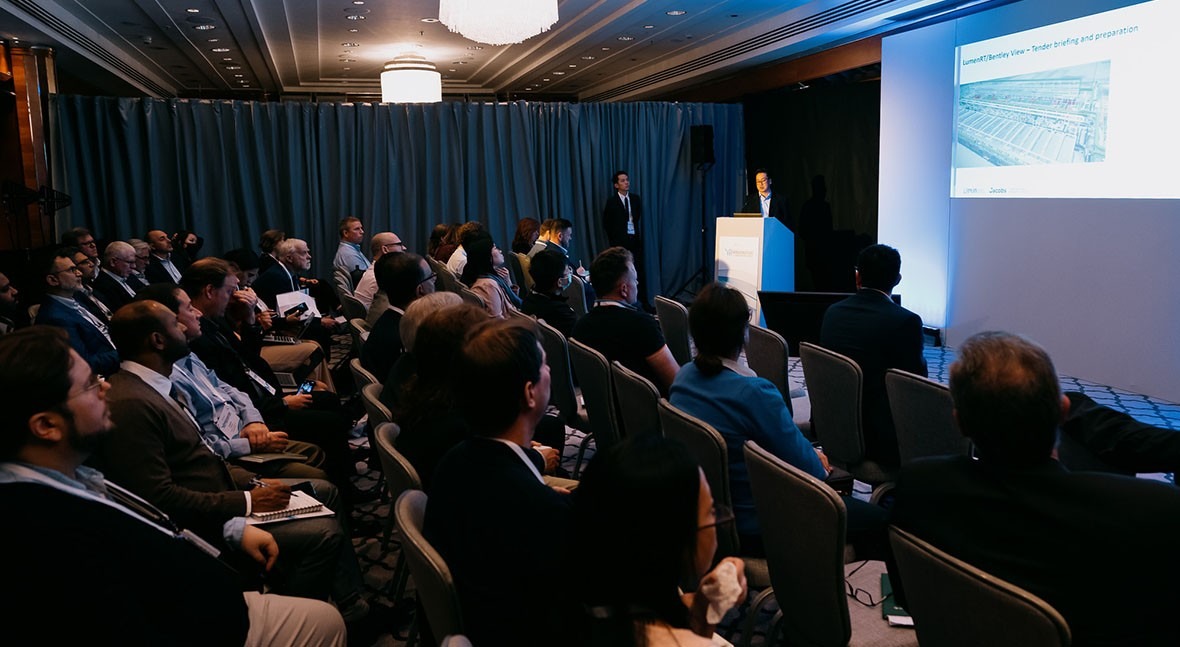 The Tuas Water Reclamation Plant, by Jacobs and PUB (Singapore’s National Water Agency) is part of the city-state Deep Tunnel Sewerage System. The scale and complexity of the project, with 17 contract packages covering 75 facilities, is unmatched. Data standardisation was one of the challenges mentioned by the project representatives, who emphasised the importance of the quality and consistency of the data. Integrating all different sources into a single project information platform allows the team can navigate to see in real-time construction progress anytime, anywhere, from any device. It entails an important culture change for the participants involved: everyone accesses the project information digitally. Beyond the savings in costs and time, the project has become a benchmark for other projects to follow, a flagship project for Singapore and for the water industry.

In the afternoon we heard from the three finalists in the Water and Wastewater category, from Singapore, India, and the UK

We heard next about the project to build a water supply, sewage collection, wastewater treatment, and water recycling system in Bangalore City (township of NPKL), in India, by L and T Construction. It will provide access to safe, piped drinking water as well as sanitation for 3032 households in several villages, and improve the surrounding environment by avoiding direct wastewater discharges into water bodies. In addition, wastewater reuse will reduce the demand for freshwater resources; it plans to reuse 100% of the water for non-potable purposes. Digital tools were used not only to overcome the technical challenges of planning for various utilities, but also to engage with the community. The project went to great lengths to avoid inconveniences for the public, including dusk-to-dawn sewer laying, done over a 12 hour shift during night-time. Over time, thanks to improvements in efficiency, the stretch covered during those 12 hours doubled from 100 to 200 metres. 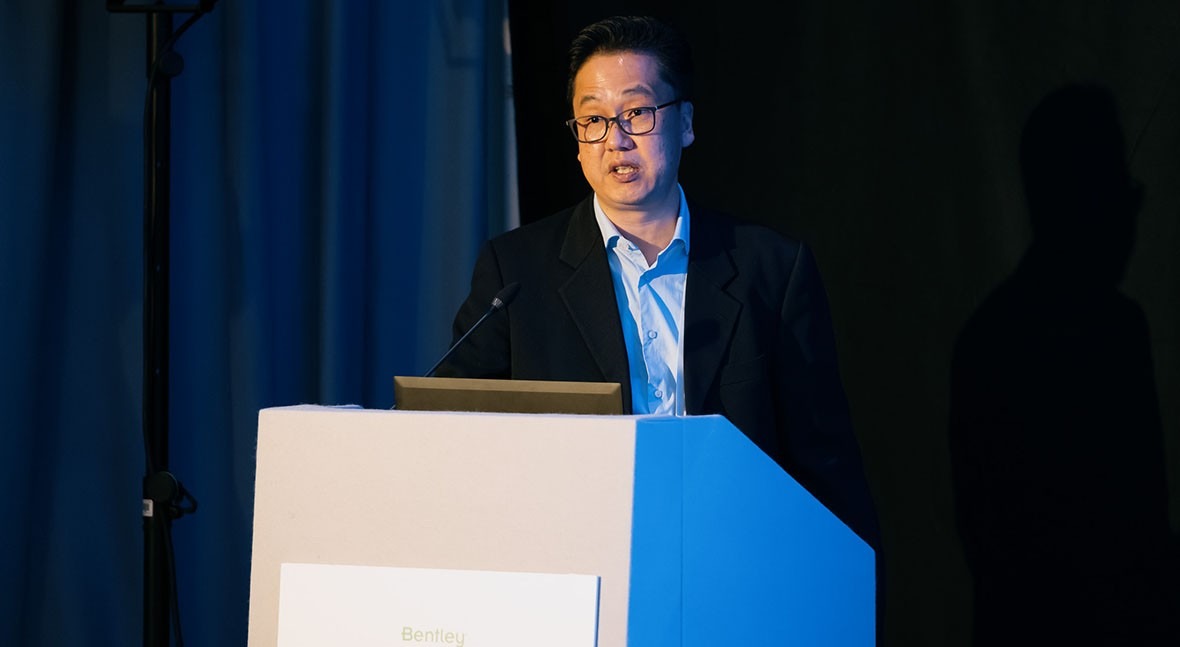 The last project presented was the Burnley WWTW upgrade, in the UK, by MWH treatment. It will enable compliance with new, stricter regulatory standards, at the same time as it increases capacity to accommodate population growth. The upgrade had to be integrated with existing operational assets and posed significant coordination and logistical challenges in the context of time, cost, and site limitations, with 12 different contractors operating on site. From the beginning, it was designed with a clear digital intent: a 4D model was developed to support construction, used to track progress at monthly digital rehearsals. This meant a new way of working for the planning and project delivery team, and also allowed better understanding of the project and associated risks during communications with the wider project stakeholders. The model will be provided to the client so it can be used during the operations phase.

The mission of the company remains the same: advancing infrastructure, helping their users face all kinds of new challenges

After the last project presentations were done, we attended a session for the press by CEO Greg Bentley, who explained some changes in the company since it became publicly traded in 2020, and then introduced new company leaders: Nicholas Cumins, COO; Mike Campbell, CPO, and Katriona Lord-Levins, CSO. The mission of the company remains the same: advancing infrastructure, helping their users face all kinds of new challenges such as new regulatory and compliance requirements, but also the need for more productivity and an ageing workforce. Bentley’s leaders announced new product launches and answered questions from attendees, emphasising the need to become data-centric, with better access, understanding and mobilisation throughout the project life cycle, from design, to construction, to operations. 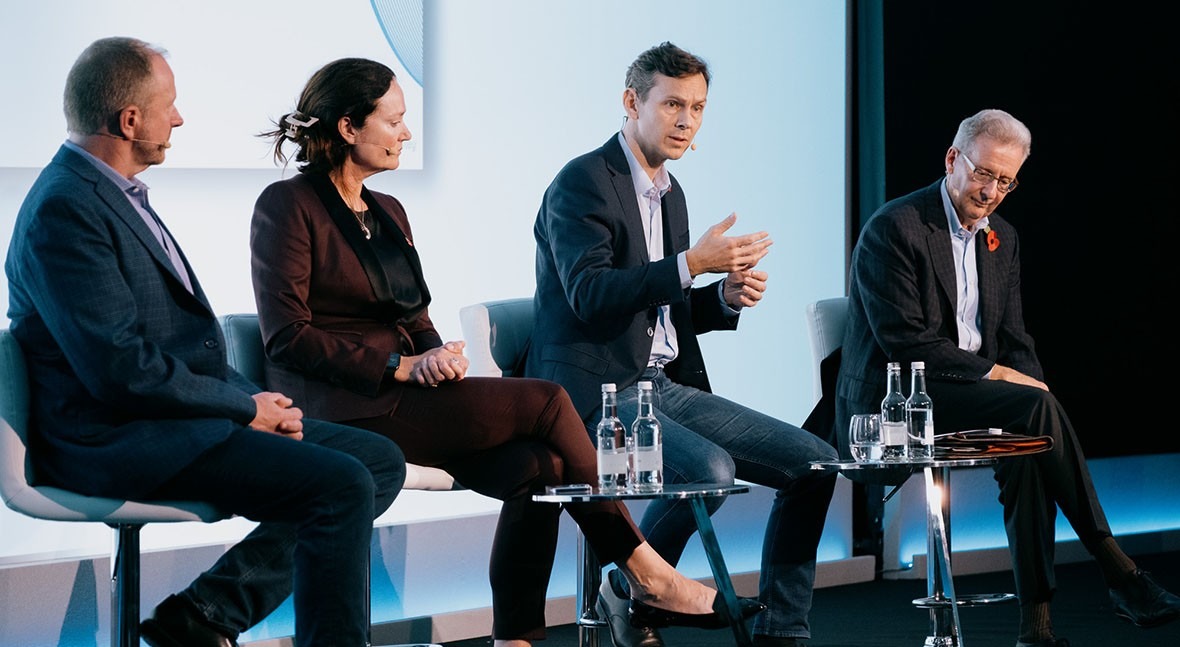 The new product launches include iTwin Experience, iTwin Capture, and iTwin IoT, which will extend the current iTwin platform. The iTwin platform is now extensively used – 42% of the 2022 Going Digital Awards project finalists credited iTwin – and Bentley is now engaged in the productization of the platform, adding new capabilities to provide greater flexibility for users. Bentley has also announced the Bentley Infrastructure Cloud, which encompasses ProjectWise for project delivery, SYNCHRO for construction, and AssetWise for asset operations, a combination of systems that span the end-to-end lifecycle and value chain of the world’s infrastructure.

We are very excited to learn more about Bentley’s initiatives as the conferences goes on for day 2. Stay tuned to hear further as we cover this event, including the winners of the 2022 Going Digital Awards. Follow Smart Water Magazine in real time in Twitter and LinkedIn – hashtag #YII2022.

Check out more about the first day of the 2022 Year in Infrastructure Conference here: https://www.linkedin.com/posts/bentley-systems_yii2022-day-1-highlights-...