Shareholder activist firm Amber Capital has proposed a strategy review at Suez saying the new management team should undertake to get the Company back on a path of value creation.

After years of poor share price performance under the tenure of the outgoing management team, Amber Capital argues it is time for change at Suez, creating more value for its shareholders.

Amber Capital, which holds 1.9% stake in Suez, has sent a letter and a presentation to the members of the Board of Directors of Suez, outlining its demands, including reducing the size of its board and reviewing its portfolio of assets.

The London-based investor had bought a little over 1 per cent of the French water utility business last December, putting the fund in the top 10 of Suez’s shareholders.

“The decision to invest was rooted in the belief that the new management team has a compelling opportunity to unlock value at Suez should it implement a clear strategic reset to reposition the Company,” stated Amber Capital in a statement.

Carrying out an in-depth research based on historical data to review Suez’s performance and strategy over the past decade, Amber Capital called for Suez to make numerous changes.

“Suez needs a strategic reset: The new management team of Suez now has a compelling opportunity in our view to reposition the Company.”

Suez’s share price performance has been poor since IPO 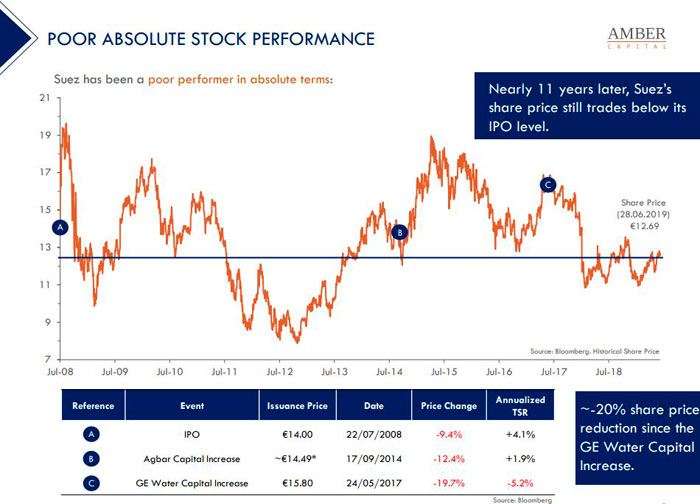 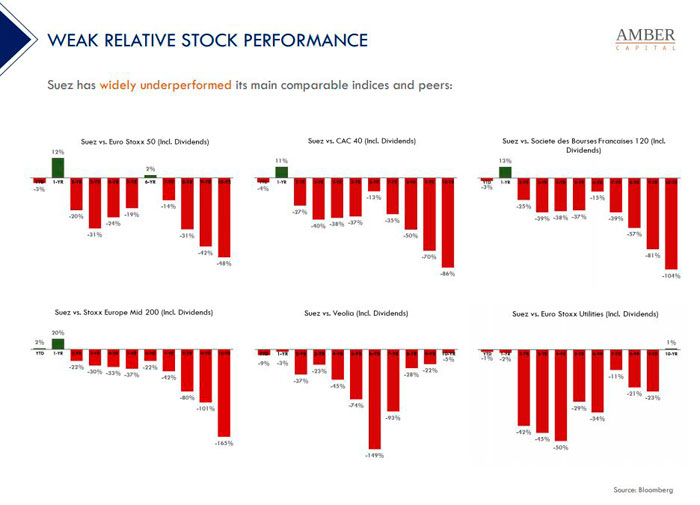 "On a relative basis, over the past six years Suez has underperformed, its direct peer Veolia by -149% and the Euro Stoxx Utilities index (SX6E) by -34%1 - the underperformance of the company against its peers has been sustained over the past decade."

Amber Capital believes that Suez’s underperformance is due to poor capital allocation with a highly-capital intensive strategy that is primarily focused on revenue growth at the expense of profitability. 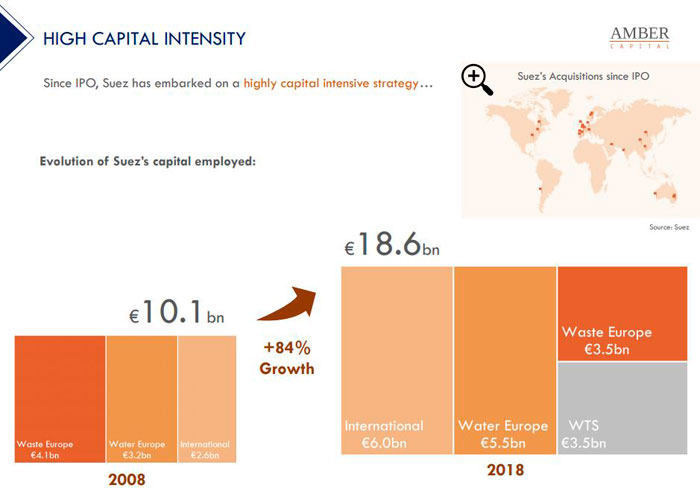 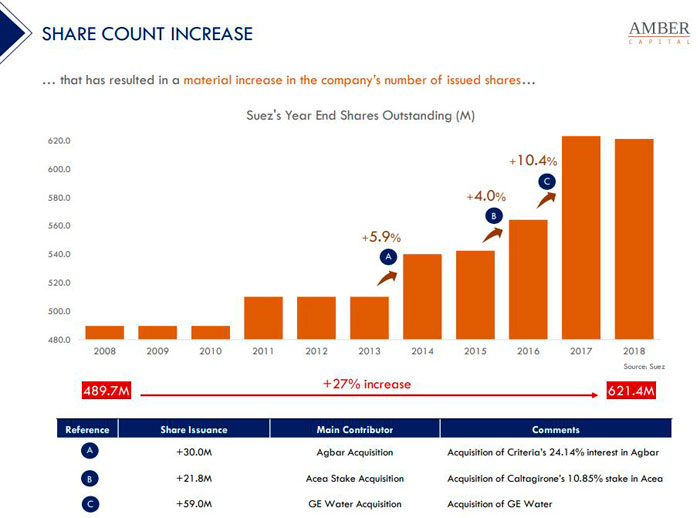 It explains in a power point presentation that: “Over the past decade, Suez has been too centred on a capital-intensive top-line growth strategy in our view, mainly through internationalization while not focusing enough on value creation.” 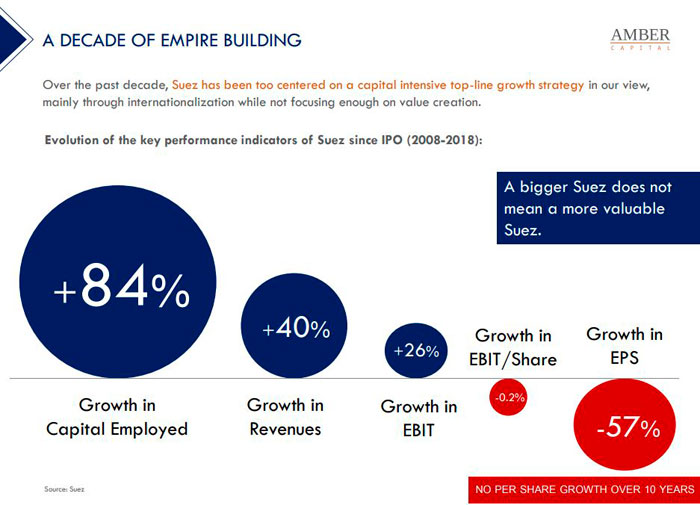 “We believe the company has subsequently suffered from a recurring need to issue shares to fund acquisitions while earnings contribution has been limited. This has resulted in both a decrease in ROCE and an increase in Financial leverage.” 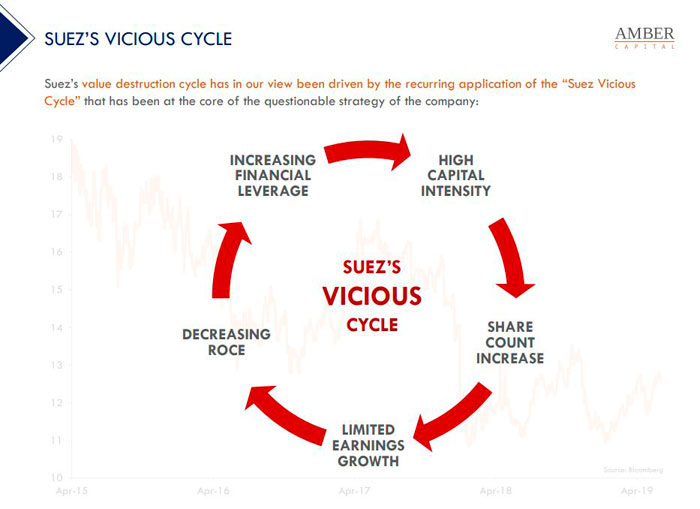 Amber Capital has highlighted that the appointment of Bertrand Camus as CEO of Suez marks the beginning of a new chapter for the Company, stating the need to position Suez as a faster growing and more profitable business. 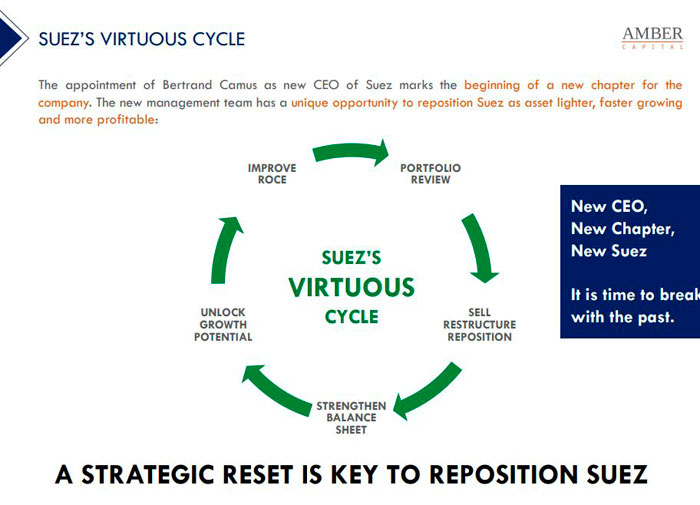 After years of limited portfolio management, Amber Capital believes the Company needs a thorough portfolio review to rotate out of mature assets and use proceeds to reinvest, delever and buyback shares. ​Adding that this rotation would allow the “New Suez” to enjoy higher growth, higher returns and a lower leverage.

To initiate an asset rotation cycle, it recommends the disposal of Spain-based Agbar.

“From a financial standpoint, we are of the view that the asset has reached a maturity level that suggests a limited industrial angle for Suez to exploit from hereon.”

“Additionally, the ROCE of the asset per our estimates is significantly below the returns Suez aims to reach with its Growth CAPEX (guidance: WACC + 400 bps) and most importantly below the cost of capital of Suez. Finally, the asset represents a significant portion of the capital employed base of Suez and as a result is a sizable opportunity to reposition the Company.”

Amber Capital continues by saying that due to the stage of maturity of Agbar Spain and its concession model, the natural owners would be financial investors including infrastructure, private equity and pension funds. 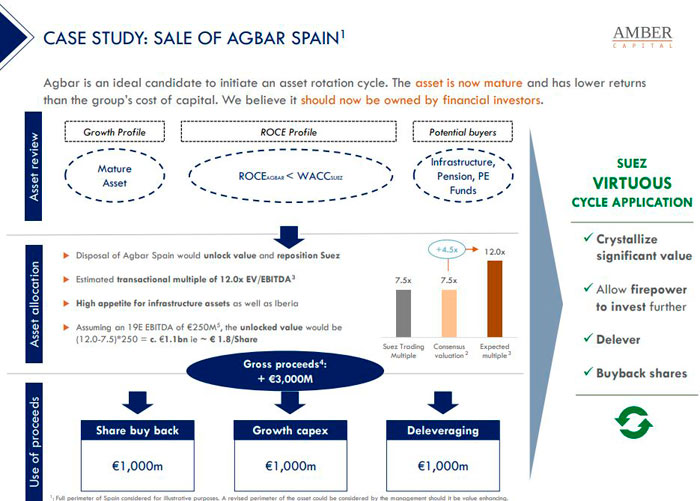 Reduce the size of the board

Finally, Amber Capital proposes Suez to reduce the size of its board from 19 directors to the industry average of between 12 and 14 in order to allow for a leaner, more agile corporate governance. In addition, the CEO’s annual variable compensation plan should be improved by including ROCE and Earnings per share as remuneration criterias instead of Revenues to further align with shareholders’ interests.

According to Reuters, SUEZ has already replied to this letter arguing that it is in the process of strategic reorientation which they will present next autumn. 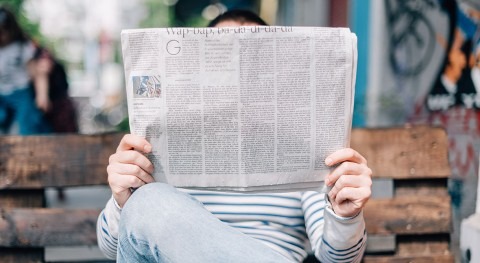 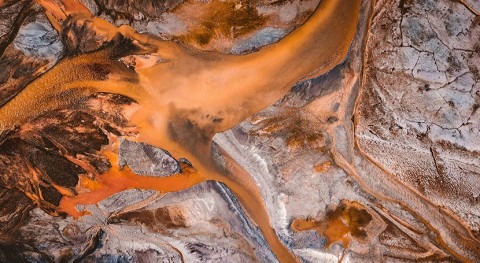 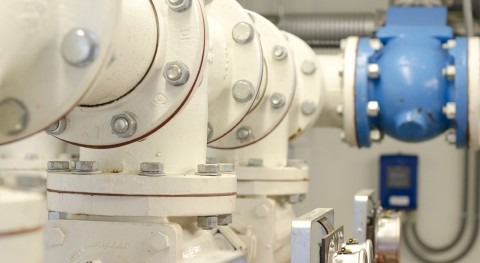