Can a moss help clean up waterways?

In a paper published in the Journal of Environmental Quality (2021), researchers studied a type of submerged aquatic moss. Fontinalis antipyrectica has a common name of “willow moss” and can even be installed in home ponds.

Willow moss is a species in the class Bryopsida, which includes over 11,000 moss species around the world. It is quite widespread and grows in fresh water. It has been found Europe, Asia, Africa, and North America. Willow moss’ structure grows entirely underwater. 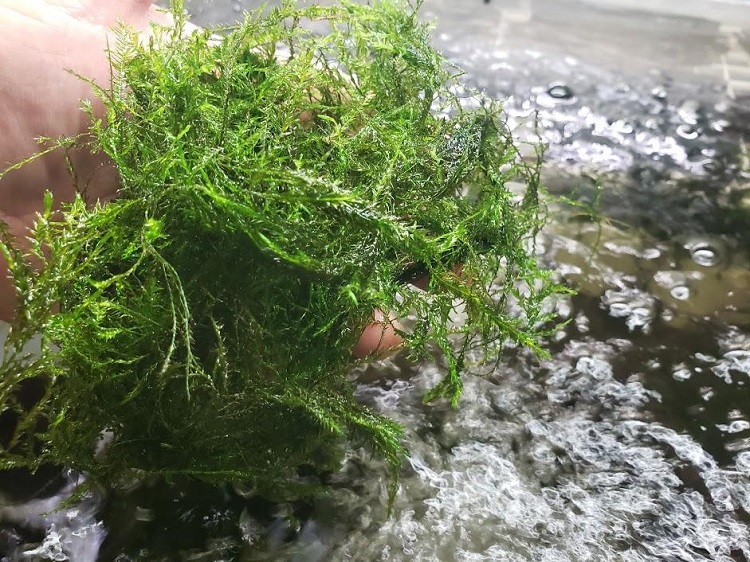 Willow moss grows in freshwater streams and waterbodies. A recent study found that dried willow moss can be used to pull hydrocarbons from water. It can also be used as a hydrocarbon detector, letting scientists know if there has been a spill or if cleanup efforts are needed. Source: Plantdrafts

Pollution is a major environmental issue that affects public health, the environment and economy. It’s a priority matter for our society. This year is the 50th anniversary of the United States Clean Water Act.

The research team focused on willow moss’ ability to soak up a type of environmental pollutant called polycyclic aromatic hydrocarbons. You most likely know them as items like gas for your car, oil to heat your home, and other petroleum products. All of them are known as “organic compounds” because their structure is built off a carbon-based backbone. For simplicity’s sake, we’ll just call them hydrocarbons.

Hydrocarbons can be found in waterways on the surface, attached to small particles. They get to waterways by runoff from roads, oil spills and other industrial contamination. Of course, various hydrocarbons act differently – oil is thicker than gasoline, for example. This makes a difference in cleanup efforts.

Willow moss is aptly named because it looks a bit like willow trees – with lots of surface area. That means the outer cells, called cell walls, have good contact with the hydrocarbons. The researchers used dried willow moss, which is also called sphagnum moss. For experimental purposes, they set bags of the dried moss into streams in their study area – northwest Spain. They placed the bags in streams containing human-made pollution of varying levels.

The researchers found that the dried willow moss was excellent at absorbing both low and high concentrations of hydrocarbons. In fact, their paper calls the collection ability “astonishing!”

Another way the dried moss can be used is as an environmental monitor. Bags placed in waterways can be collected. In the lab, scientists can measure what quantity of hydrocarbons the moss have picked up. In that way, they can determine if larger cleanup efforts are needed – as well as investigating the source of increased hydrocarbon content.

This isn’t the first time scientists have looked to the plant world for decontamination. In a previous Soils Matter blog, we explained how ferns are being used to pull arsenic from soil.

Other studies have shown that hydrocarbons can be pulled from soil by other plants. Christina Negri, Argonne National Labs, showed that quick-growing poplar trees could pull solvents from her study area near Chicago, while also controlling surface erosion.

Paul Schwab, now with Texas A&M, formerly worked in the Chicago area as well. He notes that while soil microbes “eat up” much of the hydrocarbons, popular trees use up a lot of water, and provide oxygen so the microbes can do their work. He was also involved in a study with prairie plants that determined which ones were better at metabolizing hydrocarbons on abandoned gas station lots. Common prairie plants, like purple and yellow coneflowers, yarrow and wild bergamot were top candidates.

The European Union, where this study took place, has their own equivalent of the Clean Water Act. Directive 2013/39/EU defines quality standards in inland surface water, reporting the maximum allowable concentration. The authors concluded that dried willow moss is an environmentally friendly biomaterial. It can be used alone or in conjunction with other remediation technologies to remove organic pollutants from inland surface waters.