Overpumping groundwater poses a major threat to the availability of a critical resource, especially in the arid lands of the Southwestern United States. States across the region have sought to deal with this issue through a wide variety of regulations and permitting processes. A new dashboard tool, created by affiliates from Stanford’s Water in the West program, compares groundwater withdrawal permitting – a common tool used by resource managers to limit groundwater pumping – to help plan for a more sustainable future.

“Western states have adopted a wide range of approaches towards regulating groundwater pumping, but information about these approaches are not always shared across the region. Our goal is to help parties in different states learn from what is happening elsewhere. This is particularly important in California, where local agencies are working to implement the Sustainable Groundwater Management Act,” said Leon Szeptycki, executive director of Water in the West and a dashboard contributor.

Groundwater, a major source of drinking water, makes up roughly 25 percent of total available fresh water across the U.S., however drier states with less surface-water supply use it more heavily than other regions. Water users in these areas often pump groundwater at a rate exceeding the recharge from rainfall, irrigation and streamflow, leading to a condition called overdraft. Overdraft can lead to negative consequences including seawater intrusion, water contamination, lowering of the water table and land subsidence.

Groundwater, a major source of drinking water, makes up roughly 25 percent of total available fresh water across the U.S., however drier states with less surface-water supply use it more heavily than other regions

Unlike surface water, groundwater has not been regulated in California historically. Traditionally, a right to withdraw groundwater was established by pumping the water and using it. The 2014 Sustainable Groundwater Management Act requires sustainable management of groundwater basins, empowering local agencies with regulation of groundwater extraction if necessary. California was the last of the Southwestern states (including Arizona, Colorado, Nevada, New Mexico, Texas and Utah) to create a statewide framework for groundwater management.

“Our goal was to clearly lay out the varying policies and practices of these Southwestern states, highlight the geographic areas in which they held sway, and enable side-by-side comparisons across a number of different parameters. Some things are just best done visually, even in nuanced fields like the law,” said Geoff McGhee, dashboard co-creator and former creative director at the Bill Lane Center for the American West. 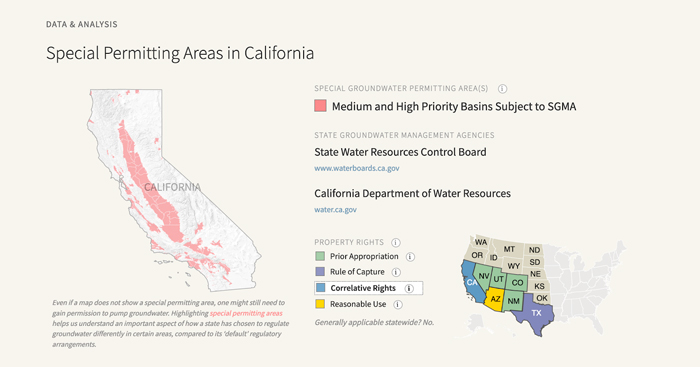 To better understand the bigger picture of water withdrawal for each of the states, the team pulled together special permitting information from areas needing more intensive controls on groundwater withdrawals. They examined various aspects of permitting, such as the criteria a user must meet to obtain a permit, exemptions, required metering and penalties for violations.

“We did systematic searches of state legislation and regulations to find common themes and striking differences,” said Rebecca Nelson, a non-resident fellow at Water in the West and senior lecturer at the Melbourne Law School, University of Melbourne, Australia.

“The dashboard sets out a menu of key components for California agencies looking to introduce a permitting regime for the first time, and shows just how widespread and indispensable this approach has become to groundwater managers across the Southwest,” Nelson said.

The dashboard is largely based on two recent studies authored by dashboard co-creators Debra Perrone, a non-resident fellow at Water in the West and an assistant professor at the University of California, Santa Barbara Environmental Studies Program and Rebecca Nelson: The Role of Permitting Regimes in Western United States Groundwater Management; and Comparing Local Groundwater Withdrawal Permitting Laws in the Southwest and California.

This work was generously funded by Cody Smith.