A serious problem threatening our rivers and seas is the large amount of waste discharged into them by sewer systems. For years now we have been hearing about it from environmental organisations, authorities, mass media and social media, and we have witnessed countless initiatives to clean up rivers, dry riverbeds of ephemeral streams, and the marine environment, as well as institutional campaigns to raise awareness about the problems caused by the waste discarded through the toilet or carried by urban run-off into the sewer system.

These efforts to communicate and give visibility to the issue have helped our society to be aware of this serious problem. Unfortunately, the issue is far from being solved. Whereas there have been several campaigns with a strong media impact, such as those about wet wipes "monsters" or fatbergs, we have seen that situations such as the COVID-19 pandemic have led to an increased use of disposable, one-use plastics and masks, which time and again end up in our sewer systems, and by extension, in our rivers and seas after periods of heavy rainfall.

At the end of 2019, a pilot test with the Tecno-Grabber net system started in one of the sewers in Sabadell

In most cities and towns in Spain and other European countries, when the water volume in the sewer system exceeds the capacity of the sewer system during periods of heavy rainfall, the excess water is discharged as overflows through an outfall, directly into rivers, dry riverbeds of ephemeral streams and the sea, carrying with it the waste accumulated in the sewers. The Mediterranean climate in a large part of Spain, characterised by periods of torrential rainfall preceded by intense drought, exacerbates this problem. Although the regulations in Spain are clear concerning this type of discharges, few solutions have been adopted in this case to solve the problem.

The company Aigües de Sabadell, jointly with the Municipality of Sabadell (Barcelona), wanted to solve this problem by testing several technologies that could really address the issue of waste being discharged into the river by the sewer network, and Tecno-Grabber was one of the selected ones. 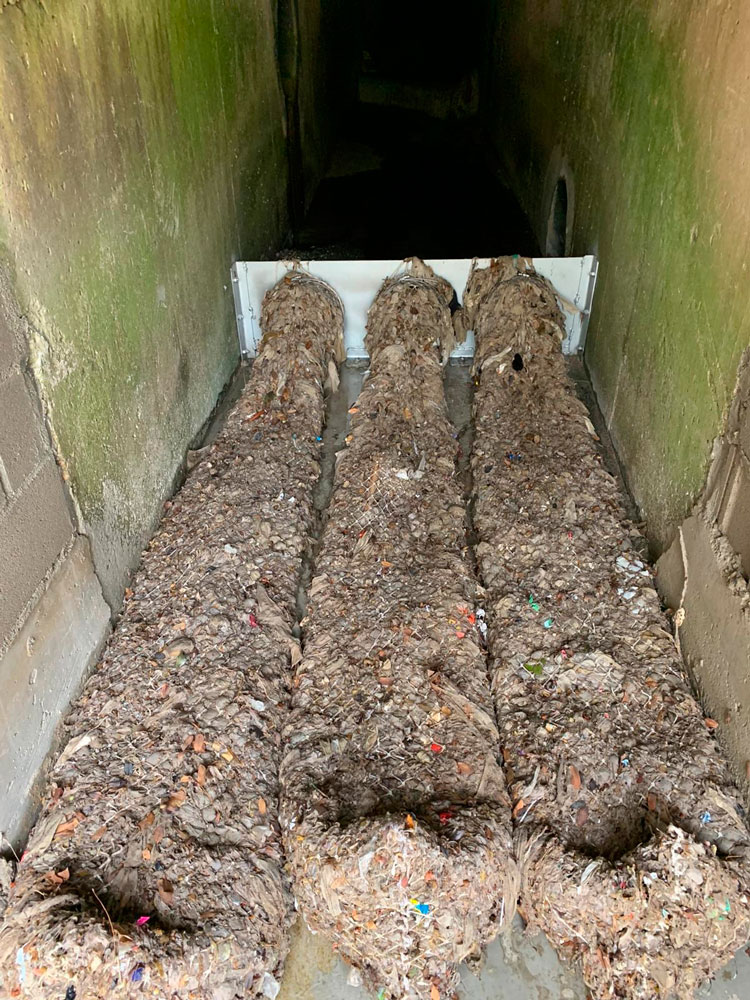 Condition of the three Tecno-Grabber units in the Sabadell sewer after rainfall in the month of August.

This is how at the end of 2019, a successful pilot test with the Tecno-Grabber net system started in one of the sewers located in the city of Sabadell. The system comprises a baffle made entirely of stainless steel with reinforcements inside to withstand the large volume of water it must retain as it channels the flow through the Tecno-Grabber nets. The net system consists of high-resistance, reinforced plastic netting which allows collecting a large amount of waste with no risk of tearing.

After they had been in place for about one year, the following results were achieved:

The Tecno-Grabber net system can be custom made for any size and shape of sewer, to fit any system

The Tecno-Grabber net system can be custom made for any size and shape of sewer, to fit any system.

Another city where the Tecno-Grabber net system is currently being tested is Tarragona, with the Municipal Water Company of Tarragona (EMATSA), in order to minimise the impact of waste released into the marine environment through sewer outfalls during overflow events. Specifically, EMATSA and the Municipality of Tarragona decided to do a pilot test in the Playa del Miracle beach in Tarragona.

The net system was set up in one morning, and the system comprises 6 Tecno-Grabber units installed inside the sewer.

The Tecno-Grabber system is expected to collect 5.4 tonnes of waste per year at this location.

The Tecno-Grabber net system can be custom made in any size, and even made to fit the different shapes of sewers, so it can be adapted to practically any location, although there are recommended sizes which have been tested on the ground to facilitate the handling of the nets once they are full of waste.

How are the Tecno-Grabber nets removed?

To facilitate the correct removal of the nets, it is important to enable an access point to remove the nets once they are full of waste without a lifting system. Even though the weight of the Tecno-Grabber net once full is not too large, about 100 kg, clients usually choose to remove them with the help of a crane truck, since it makes maintenance tasks easier and safer.

Can the nets be reused?

The plastic material the Tecno-Grabber nets are made of allows them to be reused as often as the clients deems appropriate without losing their properties.

Do you recommend replacing the nets or can they be reused?

As I mentioned earlier, the Tecno-Grabber nets can be reused, although emptying and cleaning them can be a tedious task. Some clients choose to replace them, and some choose to empty them and put them back in place.

Can the nets collect all the waste?

Unfortunately, they cannot. The net system is designed to retain the largest volume of solids without holding back water or hampering water flow in the outfall as it fills, since that could lead to the back-up of sewers and pipes and serious problems and risks upstream from the net system. Nevertheless, we should keep in mind that most of the waste run-off takes place within the first 15-20 minutes of a sewer overflow event, so that the net system is able to effectively collect most of the waste discharged during a heavy rainfall event. 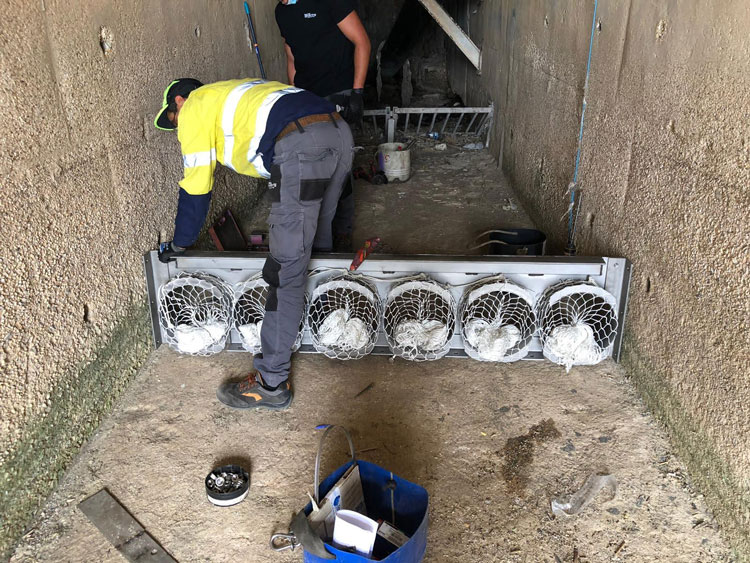 Under what conditions does the net system fill faster?

When it doesn't rain for a while, waste accumulates in the sewer network, until rain washes it away. When the water flow is very large and the sewer network cannot handle any more water, the excess water is discharged as overflows through an outfall or by-pass in the network into the natural environment, where the Tecno-Grabber net system catches the waste. As we mentioned earlier, the first minutes of heavy flows are more powerful and carry more waste; it is then when the net system retains as much waste as possible.

Can water go over the baffle and net system?

When the water volume is significant, the water runs into the baffle and the Tecno-Grabber nets start doing their job. If the water level continues to rise, whether because of the intensity of the rainfall event, or because the nets gradually fill, water will overtop the baffle. In this regard, the Tecno-Grabber baffles are designed with a serrated top that intercepts some of the waste that may be washed over the net system.

Can the nets be adapted anywhere?

Yes, for the most part. The Tecno-Grabber net system is custom made according to needs. For example, some sewers have a round shape, so instead of using a baffle, the net is installed directly on the sewer pipe. Sometimes we have installed an elbow adapter that directs water into the net, thus ensuring better performance in terms of waste collection.

Does the installation take a long time?

No, it doesn't; usually it takes one morning to do it, and they are ready to work whenever the next sewer overflow event happens.

Is the system very expensive?

No, it isn't. Although the baffles, reinforcements and anchoring systems used in the Tecno-Grabber system are made of AISI-304 or AISI-316 stainless steel, the cost is relatively inexpensive, more so if we take into account that the baffle system is manufactured to last practically for life. If we compare the investment and operational cost of this system with the cost of cleaning water courses and seas, or the impact of waste accumulation in the natural environment, the cost becomes negligible.

The only parts that need to be replaced are the nets for the Tecno-Grabber system, and because there are different sizes, based on the needs at each facility, there is not a single price, although they are very economical.

The Tecno-Grabber technology has sparked the interest of several national and international organisations and entities. In this regard, we have received inquiries from several cities in Spain, and even from Chile and Mexico. 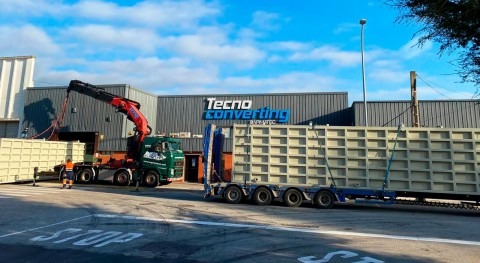 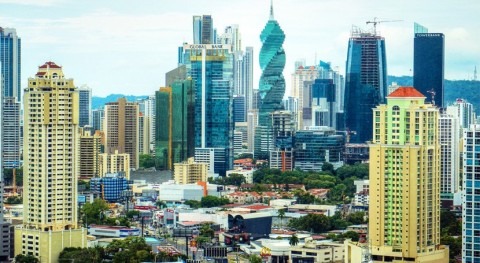 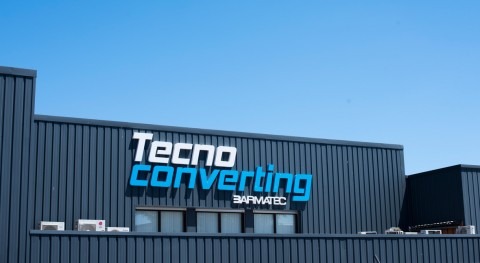 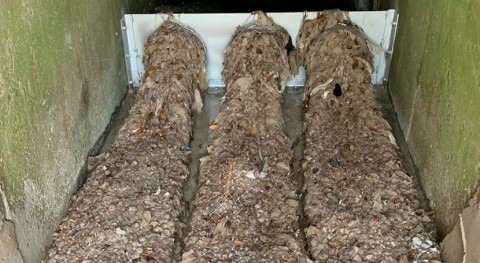 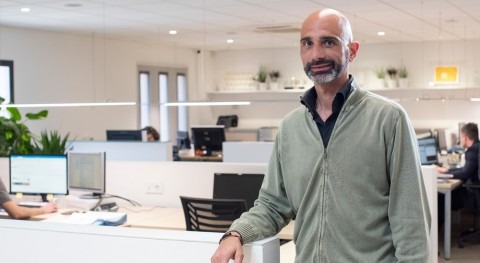 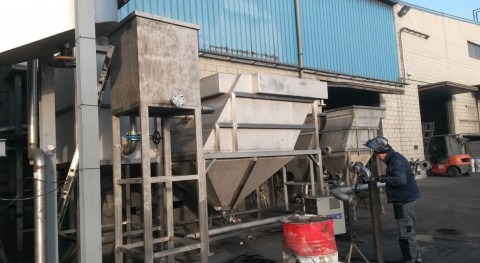 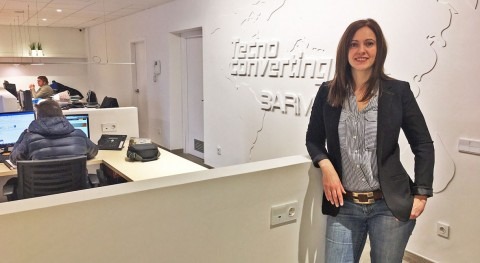 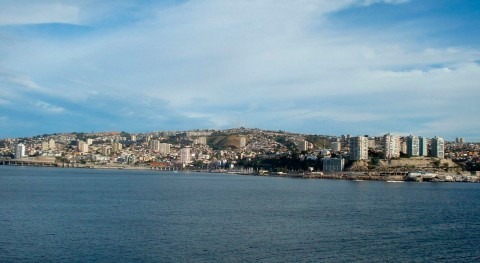 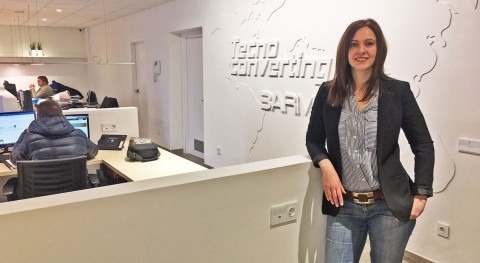 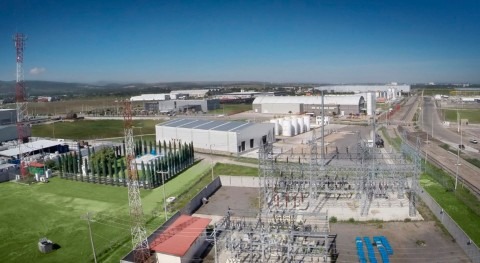 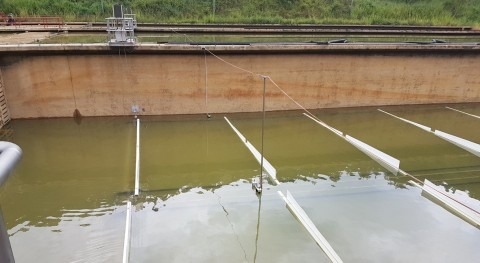 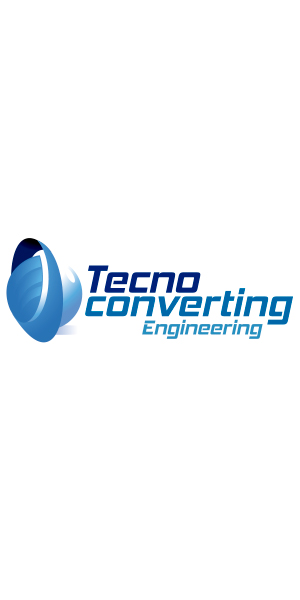