When her community in central Kenya agreed to start paying to use irrigation water, farmer Teresiah Mugo thought she would finally be able to grow crops during the dry season.

But because all 600 members of the irrigation project in Murang'a County paid a flat fee of 150 Kenyan shillings ($1.30) per month, upstream farmers had no incentive to limit their water usage - which meant farmers downstream often didn't get enough.

"I could hardly grow any crops, and when I managed to, the crops would slowly wither and dry," said Mugo, one of the 60% of members of the Kiarutara-Ragia Water Project (KRWP) who struggled to get water under the flat tariff.

That changed when a government initiative in 2018 extended the distribution pipeline and added water meters at all member farms, with farmers that use more water paying higher fees.

Since then, Mugo has received a regular supply of water - enough to grow not only enough cabbages, fruits and tomatoes to feed herself but also to send to her three children in the city.

As well, "I have surplus to sell, hence some money in my pocket," she said.

As farmers in Kenya and elsewhere around the globe try to cope with more irregular rainfall driven by climate change, adding irrigation capacity is helping keep harvests regular.

But careful planning to ensure farmers don't use more water than is needed - which can deplete aquifers, dry streams and leave those downstream without any supply - is also crucial, analysts say.

The KRWP water meters have been installed as part of the Upper Tana Natural Resources Management Project (UTaNRMP), aimed at helping the region deal with severe water shortages caused by climate change and exacerbated by rapid population growth.

"Every drop of water in the catchment counts," said Faith M. Livingstone, the UTaNRMP project coordinator.

The government project, supported by the International Fund for Agricultural Development, has upgraded 55 community-owned irrigation projects covering more than 2,500 hectares (6,200 acres) since it launched in 2012, she said.

So far, nearly a quarter of those projects have had water metering systems installed, while the rest are in various stages of receiving them.

"It is rewarding to see a granny who is happy that their kitchen garden meets their food needs at a pocket-friendly cost, next to a commercial farmer who is satisfied that proceeds from the sale of their produce comfortably cover their overheads," Livingstone said.

"Both are assured of a reliable water supply." 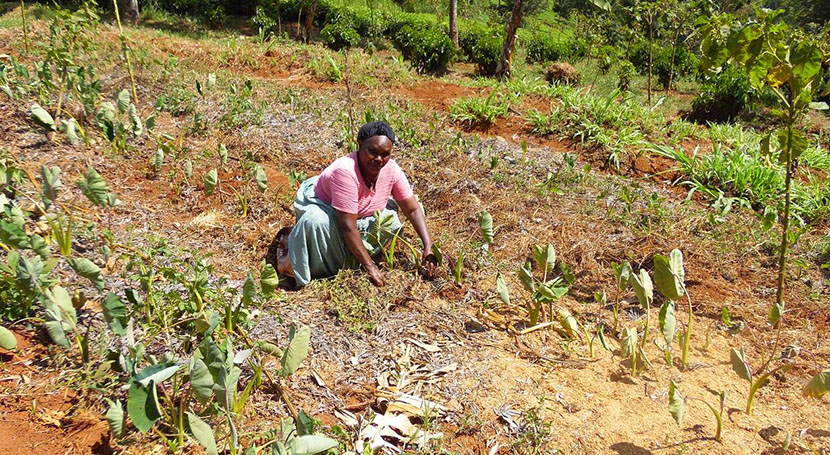 Edita Maina tends crops on her downstream farm, which struggled to get enough water until a government project installed water meters for her and other members of her community irrigation project in Kiarutara, Kenya, March 14, 2022. Thomson Reuters Foundation/Caroline Wambui

About three-quarters of the 318,000 households in Murang'a County work primarily in agriculture, according to the Kenya Bureau of Statistics. Most grow a range of crops, from coffee and avocados to mangoes and maize.

But the government estimates more than a fifth of the county's population is 'food poor', or unable to meet their minimum nutritional needs.

The main reason, farmers and experts say, is erratic rainfall and prolonged dry seasons that frequently plunge the region into water crisis.

Metering water use can make it up to 50% more efficient by reducing the amount of water farmers are willing to waste, said Thomas Milewa, an engineer with Kenya's Ministry of Water, Irrigation and Sanitation.

KRWP member farmers, who approved the revised water fee structure before it was introduced, now pay 250 shillings ($2.16) per month for up to 10 cubic metres of irrigation water and 30 shillings for every cubic metre after that.

Wamburi Murira, a member of the KRWP from Gatakaini, in the irrigation project's upstream region, said the previous fee structure let him run sprinklers on his sugarcane, Napier grass and vegetables day and night.

"We used to water our crops with no regard to the quantity used, since there were no limitations," he said.

But attitudes changed once the metering system was installed, Murira said, and after project managers met with upstream farmers to help them understand that conserving water could save cash and help those downstream.

"I am okay now with paying for what I use," he said.

Since the KRWP started using meters, the irrigation project has doubled its number of users while maintaining water service throughout the system, organisers said. 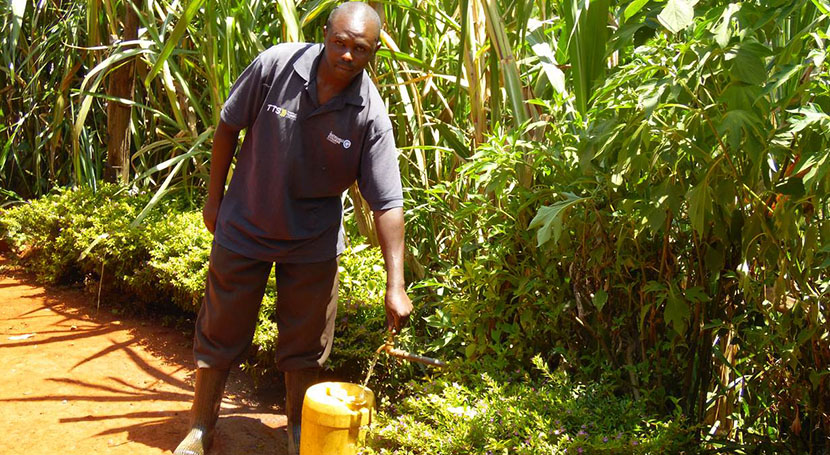 Wamburi Murira, a member of a small irrigation water project where a new metering system has led to a fairer distribution of water, fetches water from a local stream to use at his home in Kiarutara, Kenya, March 14, 2022. Thomson Reuters Foundation/Caroline Wambui

One problem with expanding use of such water metering systems is that many members of unmetered irrigation groups fear they will end up paying higher costs, said Livingstone, the project coordinator.

Visits to projects like KRWP's are helping alleviate such worries, she said.

"We have to take this route for the sustainable management of water as a natural resource," she said.

"With the proper sensitisation of community members, the adoption of water metering for community irrigation water projects will be a win for both man and the environment."