Drip irrigation, sun and solar do 'God's work' and a Colombian desert blooms

When Tomas Suarez turned up last year in this remote Guayabal community in the arid La Guajira region with seeds and the skills to grow food year round, locals greeted him with skepticism.

"The only person capable of doing this is God, and you're not God," members of the indigenous Wayuu tribe, to which he belongs, told him.

"They called me crazy," Suarez said as two tribesmen behind him grinned.

Not even a year later, the half-acre plot is a field of green, brimming with vibrant cilantro, unripe tomatoes, verdant cucumbers and baby watermelons, all thriving under a blazing sun.

For a community where farming depended on rain - with nary a drop seen for nine months - it was nothing short of a miracle.

"This land had nothing, just cactus," said local farmer John Haifer Pana, pointing to the arid surroundings where little grew in sandy soil. 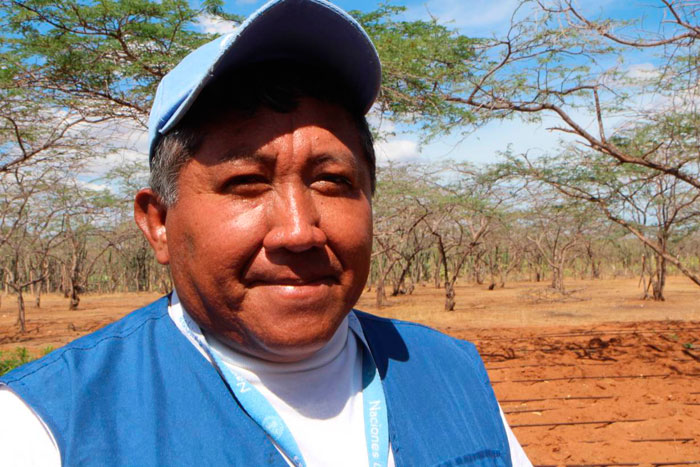 Tomas Suarez Garcia, a technical support officer with the United Nations’ Food and Agriculture Organization (FAO) in Colombia, poses for the camera at the Guayabal community in La Guajira in northeast Colombia on Jun 4, 2019. THOMSON REUTERS FOUNDATION/Thin Lei Win

Home to Colombia's largest indigenous group, the matrilineal Wayuu, and neglected by successive governments, it is a region of barren landscapes, intense heat, little infrastructure, and where a number of former mayors have been imprisoned on corruption charges.

Decreasing rainfall due to climate change exacerbates the harsh conditions. A prolonged drought between 2012 and 2016 contributed to food shortages and the death of children and animals, aid workers said.

But now there are cereals for the animals, and eggplant, cabbages and sweet peppers for the families, thanks to a drip irrigation system linked to solar-powered pumps that carry water from a rehabilitated underground well.

The project is part of U.N. efforts to support communities in Colombia which, beyond the entrenched poverty, are hosting and feeding tens of thousands of Venezuelans fleeing political and economic turmoil in their homeland.

The hope is for the new gardens to improve food availability and quality before increasing population causes hunger and malnutrition to spike.

So did the locals change their minds about Garcia? "They hugged me," a smiling Garcia, a technical support officer with the United Nations' Food and Agriculture Organization (FAO) in Colombia, told the Thomson Reuters Foundation.

The FAO said there are similar projects in 19 communities across La Guajira, a vast and isolated region on the Caribbean coast bordering Venezuela and among Colombia's poorest areas. 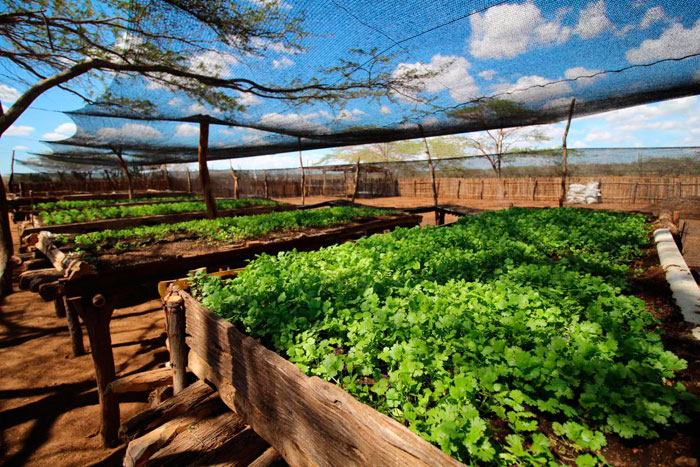 Cilantro growing under a plastic shade in the Guayabal community in the dry and arid La Guajira region in northeast Colombia on Jun 4, 2019. THOMSON REUTERS FOUNDATION/Thin Lei Win

The migration crisis has further complicated the situation for the Wayuu, said Carlo Scaramella, country director in Colombia for the U.N. World Food Programme (WFP).

"The pressure on scarce resources is intensifying because of the increasing number of migrant communities, linked by bonds of solidarity and common ethnic identity," he said.

In Guayabal, WFP provided food aid for three months while the locals focused on building their garden with FAO's assistance.

Without such support, Scaramella said these indigenous communities in harsh, remote regions far from markets might be unable to respond to the crisis.

Four million Venezuelans - more than a tenth of the population - have left their country since late 2015, with Colombia hosting the largest group, the U.N. said recently.

Official government figures show nearly 1.3 million Venezuelans have settled in Colombia, but aid workers and political analysts believe the number could be higher.

In La Guajira, many Wayuu have relatives across the porous border where work was more available. Decades of conflict in Colombia and a lack of area infrastructure made trade easier with the neighboring country.

"The family we have in Venezuela would send us food and things," said Mayelis Pana in Guayabal. "When the problems started in Venezuela, we stopped receiving them and they started coming here."

With lower incomes from falling trade and more mouths to feed, the Wayuu in La Guajira is now facing a crisis, she said.

But their struggle is invisible to those outside the region, said Manuela Angel Gonzalez, FAO's assistant representative in Colombia, because of La Guajira's isolated remoteness.

"There are thousands of these communities in La Guajira, and every one of them is receiving family from Venezuela," she said.

"And there will be a breaking point." 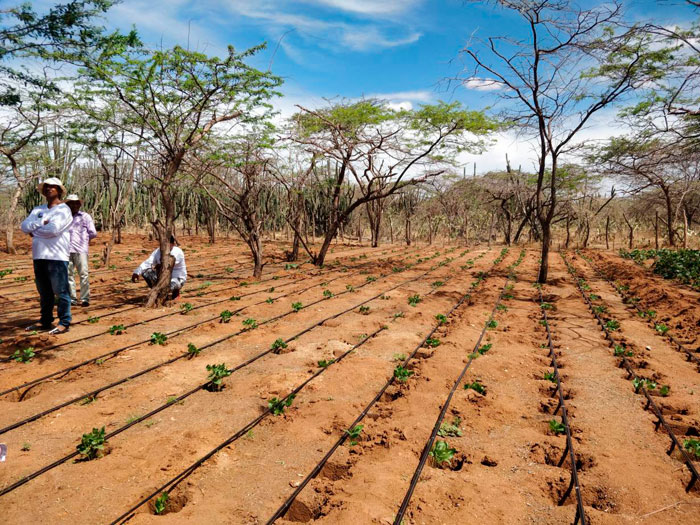 Members of the indigenous Wayuu tribe stand and sit next to newly-planted fruits and vegetables set up with a drip irrigation system in the Guayabal community in the dry and arid La Guajira region in northeast Colombia on Jun 4, 2019. THOMSON REUTERS FOUNDATION/Thin Lei Win

For now, hopes are high for the new gardens to provide food year-round regardless of the weather, and for local communities to continue growing crops once the U.N. has left.

FAO and WFP are training them on planting, harvesting and storing techniques, with the company providing the drip system committed to at least two years' assistance, according to FAO's Angel Gonzalez.

Lucero Granadillo, 53 and living in Tutchon, another community WFP and FAO are helping, learned to set up the wind mill-powered irrigation system.

It is a far cry from her previous life in Venezuela, where she wove colourful bags and hammocks for which the Wayuu are known. But life in the past year with relatives here is preferable.

She just returned from Maracaibo in Venezuela, not far from La Guajira, to visit her mother and found "no electricity, water or cash".

"I was not familiar with farming but it is not complicated. We just have to give attention and make everything with love," she said.

The availability of fresh produce is also adding nutritious foods to the diets of a community that has traditionally subsisted on maize and meat.

"At the beginning, it was hard to feed (the kids) new things," said Eugenia Garcia, 46, a mother of six who was born in Venezuela but has lived mainly in Colombia.

Now she regularly makes salads, which many in Guayabal have not eaten before.

It is early days yet, but Garica said they feel more energetic and there are fewer instances of stomach problems that once plagued the community.

She boils vegetables on her new kitchen table - part of the U.N. support and safer than the tradition of cooking on the floor - and flavors them with a splash of vinegar.

"I explained to them the new food is good for their strength, their eyes, their build." she said of her children.

"And they start to accept."