Ephraim Kofi Kenney does not like to work in the fields scaring pests away. But today he must.

A flock of migratory birds has repeatedly invaded his parents' rice plot outside Accra, Ghana's capital, and the 16-year-old has been tasked with keeping the invaders away from the young crop.

If he fails, there will be no harvest on the one-acre (half-hectare) farm this season.

"This work makes me very tired. I can lose my voice because of shouting at the birds," said the youth, as he tugged at a rope attached to a bell he was using to scare off the hungry creatures.

"I wish there was a way to make it easier."

Nearby, farmers and researchers are experimenting with one possible answer: A drone that can help farmers protect their crops from the effects of climate change and ward off hungry birds at the same time.

In a project run by the Netherlands-based Technical Centre for Agricultural and Rural Cooperation (CTA) rice farmers are being taught how to use drones to carry out jobs such as spraying fertilizer more efficiently and mapping scarce water sources, said George Madjitey, CEO of GEM Industrial Solutions.

But there turns out to be a bonus: The drones can emit a noise to keep the birds from undoing all the farmers' hard work, said Madjitey, whose social enterprise is one of the local firms supplying drones for the project.

The drones cannot operate at all times - but they can help cut down on the need for work like Kenney's, which can keep young people away from their studies. 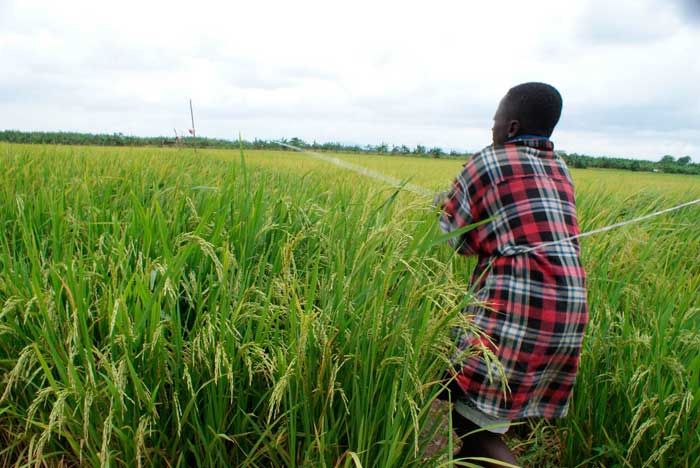 Ephraim Kofi Kenney tugs at a rope connected to a bell to scare away migratory birds from his family’s rice farm in Asutsuare village, Ghana, August 2, 2019. Thomson Reuters Foundation/Kagondu Njagi

While drones have become a staple in farming tool kits in many parts of the world, Ghana's rice farmers are for the first time learning how the devices can help them adapt to the prolonged droughts the country is experiencing.

With dry spells killing crops and drying natural sources of food across Africa, migratory birds now spend more time feeding on grain fields they come across because they don't know how long it will be before their next meal, said Kunga Ngece, a Nairobi-based development expert.

According to Madjitey, a single drone can scare away birds on a farm as large as three acres (1.2 hectares).

"The drone makes work easier for farmers because it can operate over a wide range of land. Also, the children are able to stay at home with their families and do their homework instead of being on the farm," he said.

According to Ghana's minister of food and agriculture, Owusu Afriyie Akoto, about 80% of the country's farmers have been impacted by drought this year.

Crop yields have dropped by about 7% since a decade ago, and the country loses more than $200 million every year to droughts and flooding, he said in a press conference during the 2019 African Green Revolution Forum held in Accra.

Since the CTA launched its Eyes in the Sky, Smart Techs on the Ground project in Ghana three years ago, starting with cassava and cashew nut farmers, more than 2,800 farmers in rural Ghana have become involved, Madjitey said.

Rice farmers have been included since September, he said. 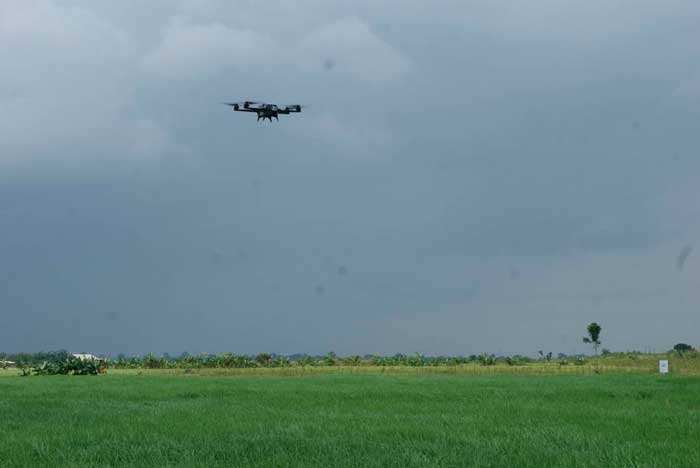 When farmers join the project, they organise into cooperatives of about 100 people. Each cooperative then pays for, uses and maintains a set of drones, which can cost upwards of $1,000 each, he said.

The farmers are grouped by neighbourhood, so a single drone can cover two or three farms each time it goes on a flight, said.

Usually, one or two farmers in each cooperative are trained to use the drones and they operate the devices for all the farmers in the group, he added.

"This ensures the technology reaches as many of them as possible," Madjitey said, as he walked around an irrigation project in Kpong, one village involved in the drone effort.

The use of drones in agriculture is part of a global move toward technical innovations that allow farmers to work faster and more efficiently.

According to a report on the digitalisation of agriculture in Africa published by the CTA in June, technology can be a "game changer" in supporting and accelerating the industry across the continent.

"With so much at stake, it is no surprise that most African countries have prioritised agricultural transformation as a key pillar of their national strategies," added the report.

Agnes Kalibata, president of the Alliance for a Green Revolution in Africa, which works with small-scale farmers, said the continent's farmers have long lagged behind the rest of the world when it comes to technological innovation.

"Africa has been going round and round in circles, but digital innovations now present an opportunity to change things. Drones are helping farmers solve complex problems in a simple way," Kalibata told the Thomson Reuters Foundation.

For example, she noted, drones can be used to collect field data - such as crop inventories or the status of irrigation infrastructure - over a wide area.

This data can help farmers and policymakers plan for and adapt to the ongoing effects of climate change, she said. 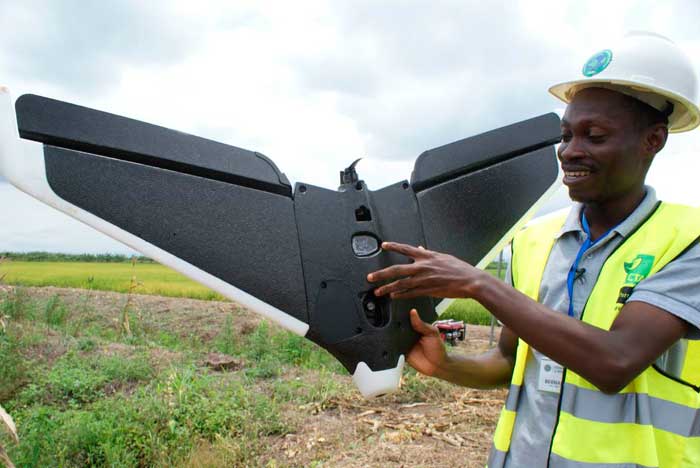 Since its launch, Eyes in the Sky has been working with business startups run by young people in more than 20 Africa countries, he explained.

The project trains youth in rural areas to operate agribusinesses, such as creating and selling innovations that can improve production for smallholder farmers.

"Some of them are doing really well. They are employing other people and they have quite successful operations," said Rambaldi.

One reason drone technology has not seen more uptake among African farmers is that many African countries either have no laws regulating the operation of drones or ban their use by civilians, he noted.

In countries like Ghana where drone technology is allowed, however, some farmers are seeing the benefits.

As well as helping them save time and labour, farmers point out that drones cut down on the health risks associated with being in daily contact with chemicals on crops and microbes in muddy fields.

"Drones have taken away all these discomforts," said Susan Fiebor, a farmer in the village of Asutsuare.