Twice a week, Nothi Mlalazi joins a long line with dozens of other people - some of whom have slept there overnight - and stands for hours waiting for water in Zimbabwe's second-largest city.

As the parched southern African country endures its worst drought in years - a problem scientists link to climate change - ongoing water shortages in Bulawayo have left residents in some suburbs without running water for more than three months.

The tankers that the city council sends to deliver water every few days are often the residents' only hope for clean water.

Many will spend the night at the delivery point to make sure they can fill their buckets before the tankers - or bowsers - run dry.

"Receiving water from bowsers is a huge challenge for many residents. We spend most of our time in long, winding queues, impatiently waiting to fill up our containers," said Mlalazi, 45, who lives in the poor, crowded suburb of Pumula South.

"You will find (people) as early as 1 a.m. already there," she added, as she stood in line with two of her daughters, who watched to make sure nobody stole their water buckets. 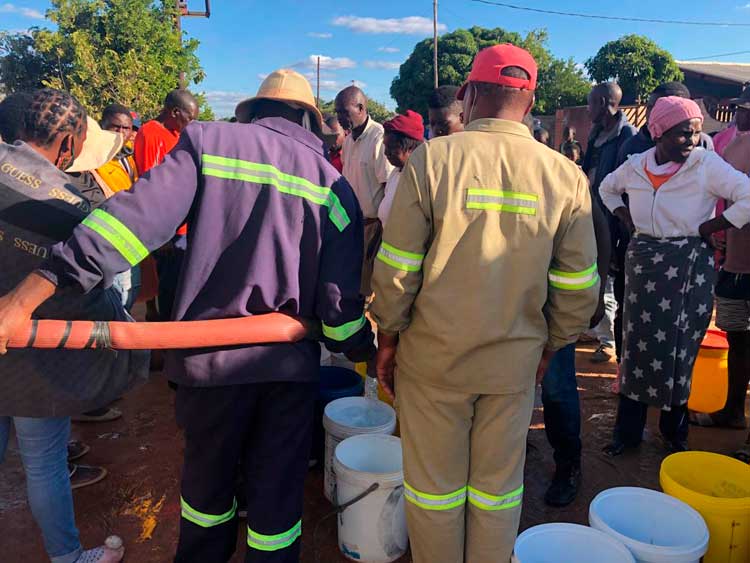 After several years of drought and patchy rains, reservoir levels have fallen dangerously low, pushing the Bulawayo City Council (BCC) to limit water supplies in an attempt to conserve the resource until the rainy season starts in October.

Last month, city authorities began shutting off piped water six days a week, reporting that the three dams acting as the city's primary water sources were at less than 30% of capacity.

The city had already decommissioned three other dams due to the water dropping below pumping levels.

Some residents have resorted to drawing the water they need for washing from unprotected sources such as ponds and leaking water pipes, or tapping into sewage gutters for water to flush their toilets, said Pumula South resident Charles Siziba.

Siziba said the situation is made even more dire by the coronavirus pandemic, as the lack of running water increases the risk that people will catch the illness and infect others.

It is almost impossible to practice the regular handwashing that health experts say is one of the best weapons against the virus, he noted.

"And there is also no social distancing to speak of, because when the bowser comes through, residents push and shove in the water queue to fill up their buckets," Siziba said.

With water arriving in the pipes at best one day a week, families are sleeping in line for water trucks in Zimbabwe's second city of Bulawayo https://t.co/rRCRls5OAf #Zimbabwe #Africa #drought #water pic.twitter.com/RTODGStNAW

Many central and western parts of southern Africa - including Zimbabwe - have experienced their lowest rainfall since 1981 over the past year, according to the United Nations.

Attributing the low reservoir levels to back-to-back droughts since 2018, Bulawayo Mayor Solomon Mguni compared the city's struggles to those during a devastating dry period in the early 1990s.

"The city's water situation is almost a recurrence of the 1992 situation where the city experienced a crippling drought that affected the city's raw water storage and supply," he said in a June statement.

Mguni added that the city council had made repeated appeals to Zimbabwe's Ministry of Local Government, Public Works and National Housing for Bulawayo to be officially declared a water shortage area, which would channel resources toward rehabilitating the city's water infrastructure.

In April, an independent engineering consultant hired by the ministry concluded that Bulawayo's dams had enough water to last 14 months and that a crumbling water supply system is to blame for the shortages.

Local officials disputed the findings, saying the water shortages were not solely an infrastructure problem.

More than 30% of the water running through the city's pipes leaks out before it reaches consumers, city council spokeswoman Nesisa Mpofu told the Thomson Reuters Foundation.

Even on the one day of the week that the water is turned on in Mlalazi's section of the city, she and her neighbours still find their taps run dry, as the water network struggles to get the resource up to their homes on higher ground.

Simela Dube, the director of engineering services at the city council, confirmed to the Thomson Reuters Foundation in a phone interview that some residents don't get any water at all because of low pressure in the city's pumping systems.

"When pressure is low in our reservoirs, it doesn't flow into high-elevated areas," he said.

"Because of this situation, bowsers are dispatched to those areas that don't get water."

But the water tankers are not always reliable, say local residents and authorities.

Sichelesile Mahlangu, a member of parliament for Pumula constituency, said she recently met some residents who had been in line for 12 hours waiting for drivers to dispense water.

To ease the situation, Dube, the water engineer, said the council has started the process of installing 10,000-litre "water-tank kiosks" in 25 sites where more than 6,000 homes are in need of emergency water supplies.

The kiosks, which cost $4,500 each, consist of a large tank with multiple taps. The bowsers fill the tanks each week and residents can collect water at any time of day, cutting down on queuing times.

According to Mpofu, the council spokeswoman, one kiosk has already been installed in the Pumula East suburb and the city has identified sites for six more so far.

Last month, Thabo Siziba, a Zimbabwean real estate investor based in Canada, launched a campaign using the online fundraiser GoFundMe to try to gather $15,000 to build at least two of those water kiosks.

In Pumula South, resident Nelson Mande Lunga told the Thomson Reuters Foundation that he stopped getting running water in his home weeks before the city started limiting water supplies to one day a week.

"I have resorted to asking for water from my neighbours who can get water on low pressure," he said.

"Otherwise, I also rely on my friends who fill up my water containers from town," Lunga lamented as he stood next to his seven buckets in a long queue for the water tanker.