Exposed to both drought and flash floods, Makueni was one of the first counties in Kenya to set up its own fund to help small-scale farmers cope with worsening climate change impacts, and dedicate local resources to tackling the problem.

Inhabitants of this water-scarce region southeast of Nairobi have often faced hunger during long dry periods, while heavy rains inundate its low-lying savannah with little notice.

Sometimes the two extremes hit the county at the same time.

"We had to think of a quick, locally led solution for our people," said Mary Mbenge, Makueni's chief officer for natural resources, environment and climate change.

That led to the establishment of the Makueni County Climate Change Fund in 2015, with Makueni among the first five Kenyan counties to pass the legislation needed to create such a fund.

Those five are now up and running, and the model is being scaled up to seven other agricultural counties, including Kisumu, Nandi, Kisii, Kakamega and Narok.

Some, including Makueni, are seeking to work with national and international agencies to tap into global sources of climate finance, such as the Green Climate Fund, to expand local projects.

Mbenge stressed that donors would only be interested "if you have already shown some initiative in utilising climate change money to implement some investments on the ground".

About 1% of Makueni County's development budget is earmarked for measures to tackle the effects of a warming climate. That spending is channelled through the local climate fund, averaging about 60 million Kenyan shillings ($554,000) a year.

The fund has a strong focus on community-run projects to improve water supplies for arable and livestock farmers, boosting their incomes and making them more resilient to an increasingly harsh climate.

Some, for example, are breeding fish in earth dams built to capture and store rainfall in the barren landscape.

Other activities include providing climate information and advice on how to plant suitable crops and fruit trees, as well as giving warning of anticipated flooding.

More than 95% of farmers working with the fund have planted trees such as mango, orange and avocado, which encouraged a fruit-juice factory to move into the area.

"Our young people are making good use of this water by way of starting tree seedling projects, which earn some cash for them," said Robert Ndetu, youth coordinator for the climate fund's planning committee.

Decisions about which projects to submit to the fund are made by ward-level committees, made up of representatives from each village, including women, young people, those with disabilities and administrators.

Daniel Muoki, a representative of the Mbitini Ward Climate Change Committee, said it brainstorms ideas for projects and then drafts proposals based on feedback from communities.

After vetting, the proposals are presented to the climate change fund's board for final approval.

Local people are involved at all stages, including monitoring and running the projects, Muoki added.

Makueni took a similar participatory approach with its County Integrated Development Plan for 2018-2022, which was crafted with input from more than 3,600 villages in 30 wards.

Under a Kamba language slogan which translates as "an opportunity for every household", one of the development plan's key aims is to ease Makueni's water deficit, partly by helping communities harvest more rainwater.

According to the Makueni government website, natural water sources on its arid and semi-arid land can only meet about 45% of the county's water needs.

Just 36% of Makueni's population has access to improved water sources, while about 18% of households have piped water. Women and girls can trek for up to 8 km (5 miles) per day to fetch water. 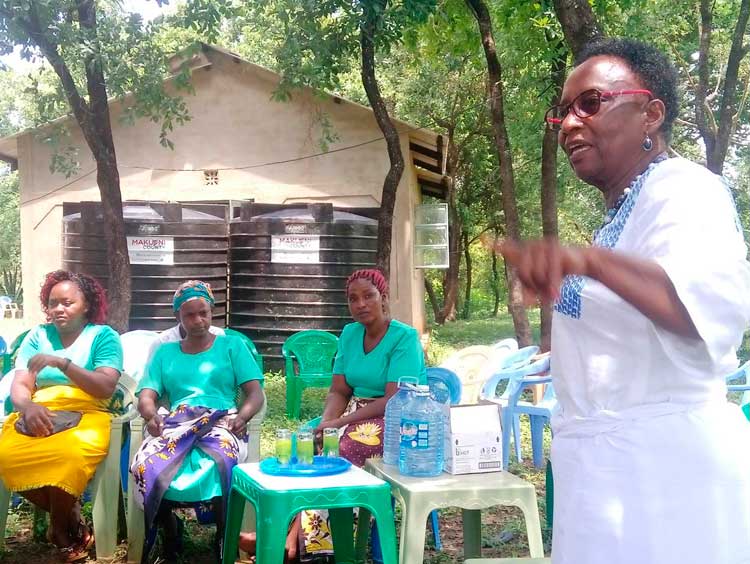 Makueni County's commitment to deploy its own finances to tackle climate change problems has encouraged others to chip in, after Britain earlier provided 50 million shillings in aid for a pilot project paving the way for the fund.

The Swedish and UK development agencies then injected 8 million Kenyan shillings into the Makueni climate fund, which the county matched with a similar amount from its own coffers.

Yet, despite the fund's success, there are concerns the COVID-19 pandemic could reduce its financial resources and curb community involvement.

The county set aside 6 million Kenyan shillings to buy water tanks at the start of 2020 and had used about two-thirds for that by the time coronavirus hit - but the remaining 2 million shillings has been reallocated to address the coronavirus situation, said Mbenge.

If COVID-19 continues to spread, the budget allocated to the climate fund will decrease "because we cannot fund climate change projects when we have the pandemic", she noted.

In addition, movement restrictions imposed by the government, which have now been partially eased, meant contractors due to come in from outside the county were unable to implement or complete various projects.

And getting information to local communities has also become more difficult due to the closure of public facilities such as churches, Mbenge said.

Using radio is the next best communication tool but it does not yield reliable data, because it is hard to calculate how many people have been reached, she added.

Once it can operate normally again, the Makueni County Climate Change Fund hopes to expand its projects to more areas and support efforts to conserve land and soil, such as terracing.

It also hopes to share lessons from its experience across Kenya and with other countries in sub-Saharan Africa.

"Africa will therefore be in a position to show the world that combating climate change can start with village action for global impact," said Mbenge.