Since he installed a thousand-liter rainwater collection tank at his home in central Kenya last year, Kennedy Kabunge has had few worries about access to clean water.

The tank stores enough for his family's drinking, cooking and laundry needs, and the supply can last for weeks even if new rain doesn't fall.

But with Kenyan authorities now urging families to wash their hands frequently, as coronavirus takes hold in the country, the once plentiful water is starting to run short.

"I can use up to 20 litres of water to wash hands in a day. When my wife is at home with me, we use double that," Kabunge, 36, told the Thomson Reuters Foundation in an interview.

Demand for clean water is on the rise in Kenya as the World Health Organization and the government urge people to regularly wash their hands to curb the spread of the virus.

In parts of rural Kenya, much of that water is coming from rainwater storage tanks that a growing number of families have installed to deal with more unpredictable weather and longer droughts linked to climate change. 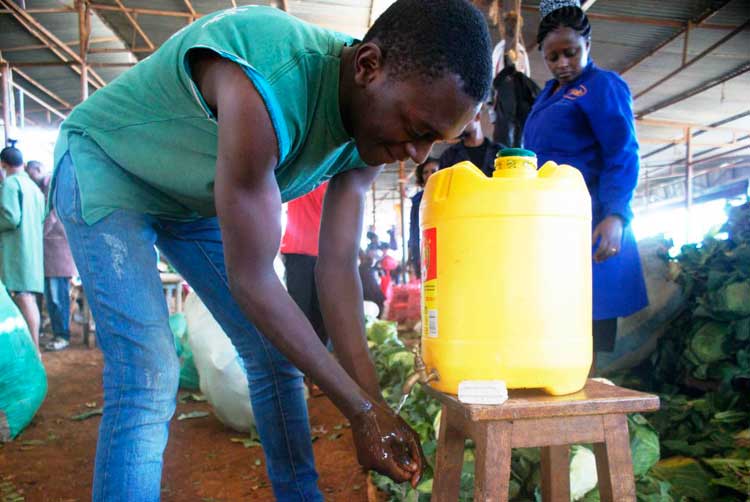 In Kabunge's village, about two-thirds of families now have the rainwater collection systems. The tanks can also be used to store piped water, which flows only irregularly.

Many people are now considering adding extra tanks, as handwashing depletes water supplies. But government orders for people to stay home have limited shopping - and some traders also have hiked their prices, residents say.

Fears of food shortages during long lockdowns, in the wake of the virus, also have many families holding onto their cash.

"I would like to go to the market to buy an additional tank. But I cannot risk my savings because no one knows what is going to happen. It is better I save the money to buy food in case things worsen," said Kabunge, a motorbike taxi operator.

A few homesteads away from Kabunge's, however, Cecilia Nderi is unworried. The 65-year-old farmer has a 10,000-litre tank to hold the rainwater that pours off the roof of her house.

She bought her tank five years ago, when farmers received a good income from their coffee beans. Since then, however, prices for the village's cash crop have plummeted, she said.

"I am not so worried about the additional use of my water for washing hands. The rains have began and so I am hoping my tank will always be full," Nderi said in an interview. 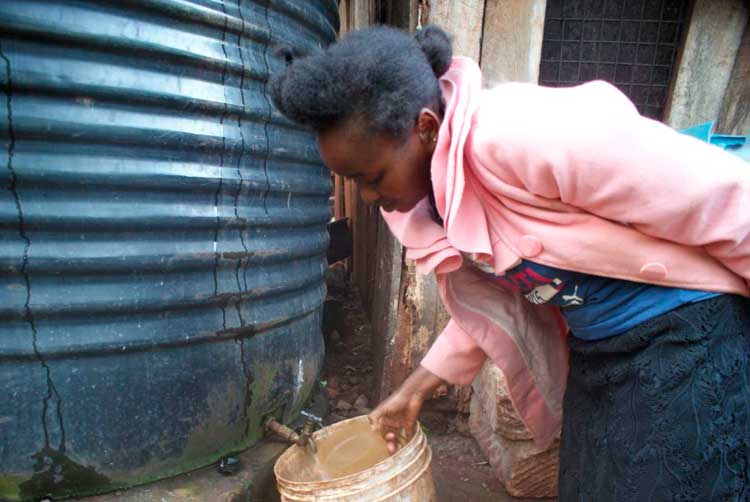 Millicent Makena fetches harvested and stored rainwater for use in her home in domestic use at her home in central Kenya, March 26, 2020. Thomson Reuters Foundation/Kagondu Njagi

For many Kenyans, however, uncertainty about access to clean water remains a serious problem.

An Afrobarometer report looking at the 2016-2018 period found that nearly half of Kenyans at some point in the year lacked enough enough clean water to meet their needs. For one in five Kenyans, the problem is a regular one, it said.

The March report said about 40% of Kenyans have piped water at home and 55% fetch it from outside their home compound.

Nearly two-thirds said it can be very difficult to get water, sanitation or electricity services from government suppliers, and more than a third said they had paid a bribe for service over the last year, the report said.

"This is alarming at a time the country is faced with a health crisis. This is not the time that officials should be denying Kenyans water because of non-payment of bills," said Richard Ngatia, the president of the Kenya National Chamber of Commerce and Industry, in an interview.

Sicily Kariuki, Kenya's cabinet secretary for water, said the government is working to ensure there are enough functional water sources in cities and towns to battle the COVID-19 health emergency.

The government is also installing new water systems in rural areas, she said.

But in some parts of Kenya - including arid Kajiado County - water harvesting tanks are already dry, with too little rain falling to fill them, residents say.

"We rely on the county government trucks to bring us water during times of hardship. We are appealing to them to do so at this time of the COVID-19 health emergency because the rains are not falling here," said Julius Ntiang'au, a Maasai elder.