A team of the University of Barcelona has analysed for the first time what the dry and hot periods could be like in the area of the Pyrenees depending on different greenhouse emission scenarios. The results, published in the journal Natural Hazards and Earth System Sciences, show that under an intermediate scenario, where these emissions that accelerate the climate change could be limited, there would not be a rise in long-lasting dry episodes, but temperatures would rise during these periods. On the other hand, if those emissions were not reduced during the 21st century, the summer no-rain periods would last an average of five more and, in addition, they would go with a rise of temperatures 6ºC over the current ones in the Pyrenees. According to the authors, these results would involve “a potential increase in environmental risks such as wildfires, crop yield losses, negative effects on biodiversity and water resources, etc.”.

The study counts on the participation of the researcher Marc Lemus-Canovas, from the Climatology Group of the UB, and the lecturer Joan Albert López-Bustins, from the Department of Geography. Both are members of the Water Research Institute of the UB.

The study analysed, on the one hand, whether the length of consecutive days without rain has increased or will increase in the future, and on the other, whether the highest temperatures during the long-lasting dry periods will be higher than the current ones. This is the first time these variables are studied together in the area of the Pyrenees, in an approximation that enables avoiding an underestimation of the risk these climate conditions bring to the area. “Plants are under a hydric stress due to a combination of a long-lasting dry periods and a high temperature, and the stress is higher than if we analyse one of the compounds. The concurrence of long-lasting dry periods and extremely hot temperatures can bring environmental risks such as wildfires, crop yield losses, and in general, serious problems regarding the biodiversity of this area, which would not be detected by considering only one of the variables”, says Marc Lemus.

The study used climate data from several parts of the Pyrenees (Catalan Pyrenees, Aragon Pyrenees, etc.) from 1981 to 2015, in the information obtained from the work carried out at the Pyrenees Climate Change Observatory, thanks to the CLIMPY project, which enabled recovering a great part of climate series. “These data show that to date, the risk of the simultaneous concurrence of long-lasting droughts and extreme temperatures has been increased by the raise of one of these cmpounds: temperature. This has taken place similarly in spring and summer and over the general area of the Pyrenees”, notes the researcher.

In order to estimate the evolution of these two variables during the rest of the 21st century, the researchers considered two out of the future scenarios of greenhouse emissions established by the UN Representative Concentration Pathways group. “Under an intermediate scenario of emissions (RCP4.5), assuming that by the middle of the century the emissions will start a process of stabilization and that by 2100 there will not be a growing trend of gas emissions, the pattern will continue to be the same: temperatures will be more extreme when these dry spells occur, but the length of these dry periods will not increase”, describes the researcher. 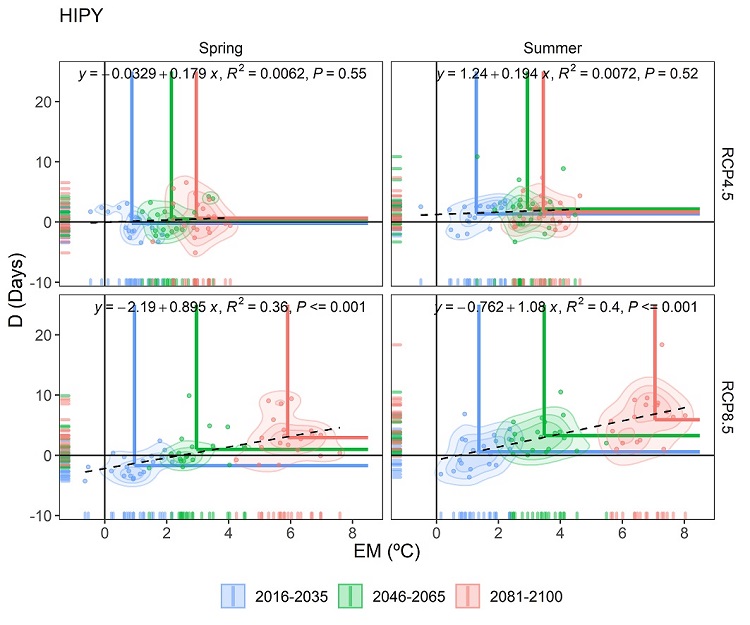 The figure shows the increase in the length of the long-lasting dry spells (Y) and the extreme temperature (X) during these dry periods in the central area of the Pyrenees and for different future periods (blue, green and red). The first column shows the future evolution for spring and the second the future evolution for summer in different scenarios.

On the other hand, this situation would substantially change under a scenario of high emissions (RCP8.5), where the volume of emissions would continue to rise during the whole century. Under these conditions, the authors detected that there would be, in spring, an increase in the length of dry periods, mainly in the eastern side of the Pyrenees, and a strong increase in thermal extremes during these dry spells. “Regarding summer, the length of days without rain will increase notably in the northern side of the Pyrenees (the wettest area of this territory) and there will also be a rise of extreme temperatures. The less exposed area to this factor in both elements would be the western area, with a higher Atlantic influence”, notes Marc Lemus. According to the researchers, these results highlight the importance of stopping the increasing trend of greenhouse emissions. “We saw it is not ideal in an intermediate scenario because the thermal increase is notable. However, a dramatic increase in the length of dry periods and in extreme temperatures at the same time could lead to a catastrophic scenario, due to the involvements it could have in a fragile area where the 59% of the surface is covered by forests”, they warn.

In this sense, the research states that this study should provide “more arguments to the provision of public resources for the actors that work on forest and ecological management of the Pyrenees, in order to adapt it for the future. And mainly, to promote a mitigation policy on climate change which is our pending subject”, he concludes.

Recently, the Climatology Group of the UB has received a favourable resolution from the Spanish Ministry on Science and Innovation for the grant of a research project titled “Eventos compuestos secos y cálidos en la España peninsular”, which will enable the team to receive resources to continue working on this research line for the next three years.