New research shows an iceless Greenland may be in the future

New research shows an iceless Greenland may be in the future. If worldwide greenhouse gas emissions remain on their current trajectory, Greenland may be ice-free by the year 3000. Even by the end of the century, the island could lose 4.5% of its ice, contributing up to 13 inches of sea level rise.

“How Greenland will look in the future — in a couple of hundred years or in 1,000 years — whether there will be Greenland, or at least a Greenland similar to today, it’s up to us,” said Andy Aschwanden, a research associate professor at the University of Alaska Fairbanks Geophysical Institute.

This research uses new data on the landscape under the ice today to make breakthroughs in modeling the future. The findings show a wide range of scenarios for ice loss and sea level rise based on different projections for greenhouse gas concentrations and atmospheric conditions. Currently, the planet is moving toward the high estimates of greenhouse gas concentrations.

Greenland’s ice sheet is huge, spanning over 660,000 square miles. It is almost the size of Alaska and 80% as big as the U.S. east of the Mississippi River. Today, the ice sheet covers 81% of Greenland and contains 8% of Earth’s fresh water.

If greenhouse gas concentrations remain on the current path, the melting ice from Greenland alone could contribute as much as 24 feet to global sea level rise by the year 3000, which would put much of San Francisco, Los Angeles, New Orleans and other cities under water.

However, if greenhouse gas emissions are cut significantly, that picture changes. Instead, by 3000 Greenland may lose 8% to 25% of ice and contribute up to approximately 6.5 feet of sea level rise. Between 1991 and 2015, Greenland’s ice sheet has added about 0.02 inches per year to sea level, but that could rapidly increase. 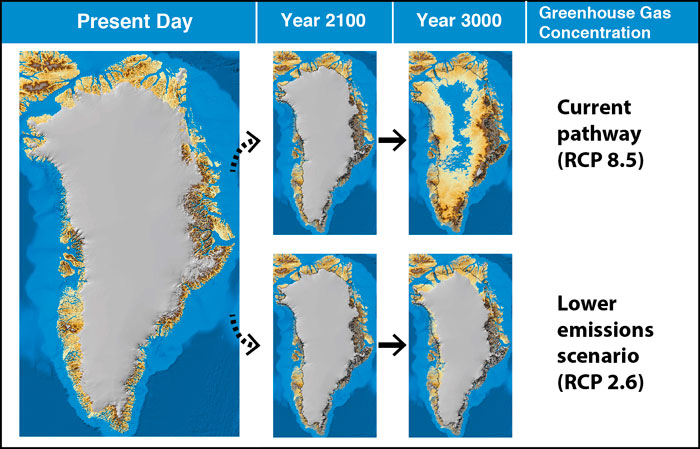 These maps of Greenland show ice losses under two “representative concentration pathways” of greenhouse gases in Earth’s atmosphere from present day to the year 3000. The RCPs, adopted by the Intergovernmental Panel on Climate Change, reflect higher (8.5) and lower (2.6) greenhouse gas concentrations associated with different levels of emissions from human use of fossil fuels. Currently, the planet is on the higher pathway. Image by the UAF Geophysical Institute

Projections for both the end of the century and 2200 tell a similar story: There are a wide range of possibilities, including saving the ice sheet, but it all depends on greenhouse gas emissions.

The researchers ran 500 simulations for each of the three climate scenarios using the Parallel Ice Sheet Model, developed at the Geophysical Institute, to create a picture of how Greenland’s ice would respond to different climate scenarios. The model included parameters on ocean and atmospheric conditions as well as ice geometry, flow and thickness.

Simulating ice sheet behavior is difficult because ice loss is led by the retreat of outlet glaciers. These glaciers, at the margins of ice sheets, drain the ice from the interior like rivers, often in troughs hidden under the ice itself.

This study is the first model to include these outlet glaciers. It found that their discharge could contribute as much as 45% of the total mass of ice lost in Greenland by 2200.

Outlet glaciers are in contact with water, and water makes ice melt faster than contact with air, like thawing a chicken in the sink. The more ice touches water, the faster it melts. This creates a feedback loop that dramatically affects the ice sheet.

However, to simulate how the ice flows, the scientists need to know how thick the ice is.

The team used data from a NASA airborne science campaign called Operation IceBridge. Operation IceBridge uses aircraft equipped with a full suite of scientific instruments, including three types of radar that can measure the ice surface, the individual layers within the ice and penetrate to the bedrock to collect data about the land beneath the ice. On average, Greenland’s ice sheet is 1.6 miles thick, but there is a lot of variation depending on where you measure.

“Ice is in very remote locations,” said Fahnestock. “You can go there and make localized measurements. But the view from space and the view from airborne campaigns, like IceBridge, has just fundamentally transformed our ability to make a model to mimic those changes.”

Because previous research results lacked these details, scientists could not simulate present-day conditions as accurately, which makes it more difficult to predict what will happen in the future.

“If it’s raining in D.C. today, your best guess is that it’s raining tomorrow, too,” Aschwanden said. “If you don’t know what the weather is today, it’s all guessing.”

However, that doesn’t mean researchers know exactly what will happen.

“What we know from the last two decades of just watching Greenland is not because we were geniuses and figured it out, but because we just saw it happen,” Fahnestock said. As for what we will see in the future, “it depends on what we are going to do next.”

Earth’s atmosphere may be source of some lunar water 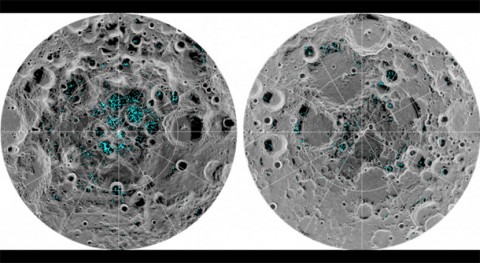 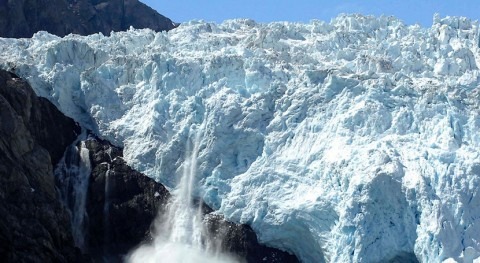 Natural cycles in the Gulf of Alaska affect ocean acidification 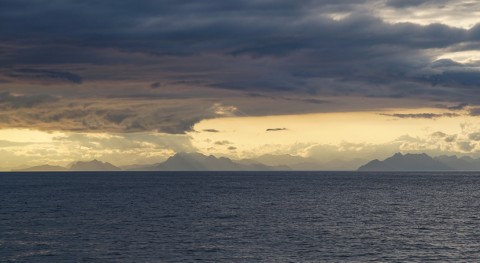 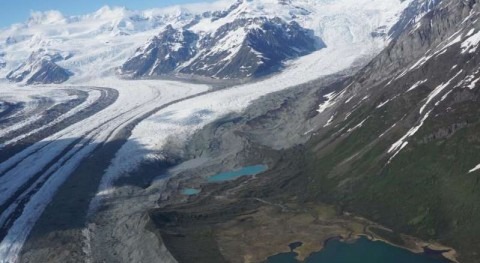