As the National Weather Service warns that a heat wave spreading across the southwestern United States is of a "magnitude rare, dangerous and deadly," a team of scientists, led by the University of Arizona, has generated a new vision aimed at reducing climate disruptions to food security, human health and rural economies.

In a new article published in the journal Plants, People, Planet, 14 scientists from the U.S. Southwest and Mexico present a model for farming in arid landscapes that's designed to benefit land health, reduce disease risks and restore economic well-being to desert communities.

The researchers propose restructuring desert food production from the ground up, by selecting wild food crops already adapted to extreme conditions. The desert food crops would be companion-planted or "intercropped" in designs that not only reduce heat stress in the plants, but among the farmworkers who care for them as well. 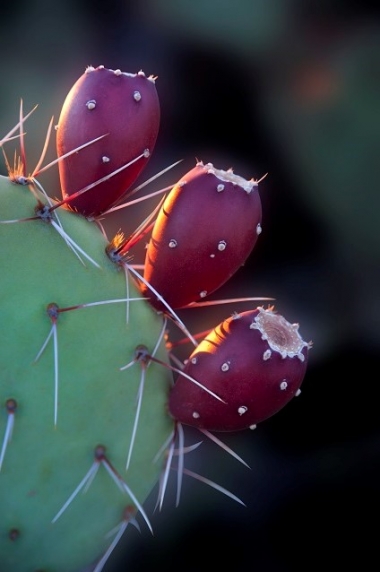 Desert plants like prickly pear cactus have evolved strategies to cope with heat and drought.Tucson City of Gastronomy

The researchers' article, titled "An Aridamerican model for agriculture in a hotter, water scarce world," calls for a dramatic paradigm shift to move desert food production away from water-consumptive, heat-intolerant annual crop plants.

Conventional agriculture attempts to reshape land and water resources to protect single crops grown in uniform stands from heat and drought stress – a strategy that is becoming increasingly costly and unsustainable under rapidly changing climate and soil conditions, the researchers say. Instead, they suggest that farmers in arid landscapes select crops from wild, resilient native species already adapted to aridity.

"Desert plants have evolved a remarkable number of strategies to cope with heat, drought, unpredictable rainfall and poor soils," said Erin Riordan, a UArizona research associate and the principal scientist coordinating the binational research team anchored at the University of Arizona's Desert Laboratory on Tumamoc Hill.

Such stressful agronomic conditions are predicted to dominate over half of the world’s land surface in the coming century, Riordan said.

To create their model, the interdisciplinary team of ecologists, anthropologists, ethnobotanists, restoration ecologists and public health professionals married elements of high-tech energy and water harvesting solutions with the traditional ecological knowledge of desert foragers from the dry regions of North America, known as "Aridamerica."

"We see today's deserts not as wastelands but as laboratories for the future of agriculture," said Gary Paul Nabhan, lead co-author of the study and a research social scientist in the university's Southwest Center. Nabhan is a MacArthur award-winning agroecologist and the Endowed Chair in Food and Water Security at UArizona.

By relying on heat- and drought-adapted food species such as agaves, cacti and nitrogen-fixing legume trees, these diverse systems can provide reliable yields of nutritious foods with minimal irrigation in the face of climate uncertainty.

“Cacti and agaves have functioned in many traditional cultures in Aridamerica as a form of insurance against environmental vagaries and annual crop failures,” said Exequiel Ezcurra, a University of California ecology professor globally renowned for both his desert research and conservation of biodiversity.

The Benefits of Consuming Desert Plants

The study highlights 17 categories of desert plants that can reduce blood sugar levels and provide a diversity of antioxidants that help buffer humans from the negative consequences of chronic illnesses that are being exacerbated by heat stress.

The authors propose public investment in producing chemo-preventive foods and medicines to deal with health risks upfront rather than investing most health care dollars in costly end-of-life hospitalizations.

Water-efficient succulents and nitrogen-fixing tree legumes may take five to 12 years to produce their first nutritional harvests. Nevertheless, they can produce more edible biomass over a decade with far less water than that used by conventional annual crops, while sequestering carbon into the soil to mitigate climate change, Nabhan said.

"We call such steadily producing arid cropping systems 'slow agriculture,' because they are like the desert tortoises who will ultimately win the race," he said. “They require few inputs other than patient capital and innovative farmers to restore food production potential to marginal lands that have been salinized, compacted or depleted of their microbial diversity.” The agrivoltaic design at Biosphere 2.Courtesy of Greg Barron-Gafford

In metropolitan Tucson, where much of the research team's work has taken place over four decades, more than 120 new desert food and beverage products have emerged from 40 start-up microenterprises. Most of these "slow foods and drinks" have appeared in the marketplace since Tucson was designated as the first UNESCO City of Gastronomy in the U.S. six years ago.

The researchers say the timing of their work is critical. With accelerating climate change and the ongoing pandemic, they warn that food security in arid regions will dramatically deteriorate over the coming decades unless new strategies are put in place.

Pilot projects to test the researchers' model are underway in both the United States and Mexico. The agrivoltaic component of this study, in which perennial crops are grown under solar panels, is being tested at the university's Biosphere 2 facility and at three public schools in southern Arizona.

In addition, Nabhan has been working with the Comcaac (Seri People) village of Desemboque in Sonora, Mexico, to plant perennial desert plants under new solar installations. Elements of the researchers' model are already in use by some food producers, including the Via Organica Farm in Guanajuato, Mexico, where mesquite, agave and cacti are intercropped for food, drink and carbon sequestration.