A multidisciplinary study conducted by the Microfluidics Cluster of the UPV/EHU has observed and characterised a novel system involving the use of an external magnetic field to manipulate the air-water interface. The study is part of the European multidisciplinary MAMI project, in which groups and companies from six countries are participating. The work has been featured on the front cover of the prestigious journal Langmuir.

Inspired by natural materials that repel water, such as lotus leaves, the study and development of interesting hydrophobic surfaces has been arousing great interest in fields such as the precise manipulation of small volumes of fluids. When magnetic properties are integrated into hydrophobic materials, the remote manipulation of the material is boosted while water is repelled, thus providing fresh perspectives for possible applications. In this work conducted by the UPV/EHU's Microfluidics Cluster, "we developed a novel system enabling the air-water interface to be manipulated using an external magnetic field", said Fernando Benito-López, senior researcher in the UPV/EHU's Microfluidics Cluster.

To do this, "we developed a layer of hydrophobic magnetic nanoparticles capable of floating on the water-air interface and forming a stable water-solid-air interface. We saw that this layer bends downwards easily under an external magnetic field. “This enabled the layer to create a tornado-like structure with an inverted conical shape which we have christened "Magneto Twister,” explained Fernando Benito-López. "This tornado-shaped structure behaves like a soft, elastic material that becomes deformed or disappears when the magnetic field is applied," added the UPV/EHU lecturer.

This is a piece of basic research in which this structure can be applied to three major applications in real-life scenarios. “First of all," said Benito-López, "we used the Magneto Twister to manipulate water droplets in an aqueous medium without them mixing with each other. We positioned the water droplets on top of the magnetic cone to move them inside the aqueous medium and transport them wherever we wanted.  Once the water droplets were in the desired location, we were able to remove the magnetic field to carry out the reaction in a controlled part of the total volume of water.

In addition, "the Twister was used to separate liquids inside a channel with an open surface, which gives us the option of having independent reservoirs inside a fluidic channel and storing reagents that will only be mixed when the external magnetic field is removed so that a chemical or biological reaction can take place," explained Fernando Benito. "It would be something similar to a valve that opens and closes to control the movement of fluids in these channels and ducts in a controlled way at the microscale," added the UPV/EHU researcher.

Finally, "the magnetic twister was used to collect and remove microplastics floating on the surface of the water simply by moving the Twister towards the microplastics to trap them", said Benito-López.

The UPV/EHU's Microfluidics Cluster says that this work "is opening up new avenues for the use of hydrophobic magnetic nanoparticles in applications assisted by the water-air interface". 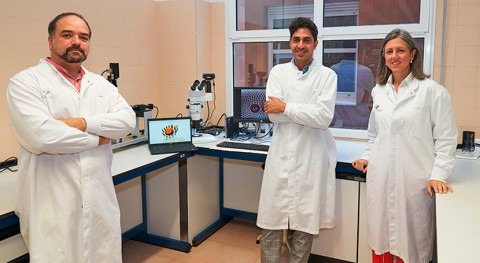 Microplastics affect the survival of amphibians and invertebrates in river ecosystems 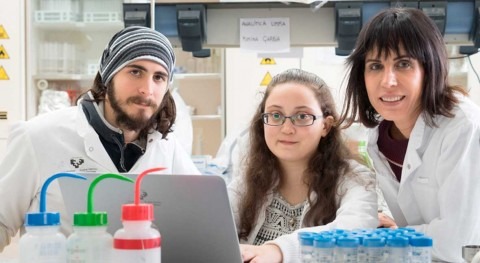