Although the UK is at the forefront of developing and harnessing technology to turn Earth Observation (EO) data into actionable information, more education and training is needed to maximise its potential and help the world to meet challenging climate targets.

A new policy briefing published today, led by the University of Bristol, has set out the opportunities and areas for improvement with EO ahead of the 2021 United Nations Climate Change Conference, also known as COP26, which will be hosted for the first time by the UK in Glasgow in November – six months away. 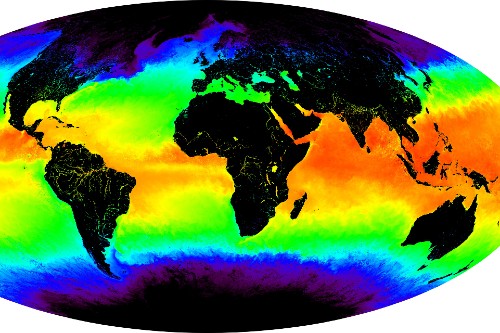 The briefing, published in association with the COP26 Universities Network comprising more than 70 UK-based universities and research institutions, identifies EO satellites as a critical tool to monitor the causes and effects of climate change. The data they capture will help hold nations to account in meeting goals to lower greenhouse gas emissions and reduce global warming, as brokered in The Paris Agreement in 2015, which 190 countries have ratified and which the US recently rejoined. The technology is also important for informing emergency services to environmental disasters, ranging from floods to landslides, volcanic eruptions, and wildfires.

Lead author of the briefing Jonathan Bamber, Professor of Physical Geography at the University of Bristol’s School of Geographical Sciences and its Cabot Institute for the Environment, said: “Earth Observation satellites are our eyes on the planet. Without them we would be virtually blind to the magnitude and timing of climate change and to human interference with the fragile ecosystems that we all depend on.” 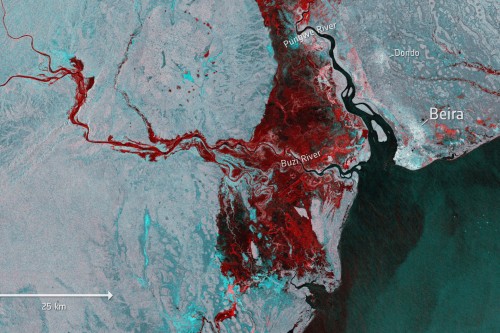 Hurricane Idai that struck southeast Africa in March 2019 resulted in widespread flooding in Mozambique. This radar image from the European Sentinel-1 satellite shows in red the extent of flooding around the Buzi and Pungwe rivers.Courtesy of ESA

Earth Observation refers to global, or near-global, observations of the Earth’s surface and atmosphere by satellites. The near-instantaneous data generated are being used to monitor and assess the pace of climate change and its impacts across the land and seas of the whole planet. Over the oceans, for instance, this includes measuring winds and waves, sea level change, surface temperature, and biological activity. On land surfaces, it encompasses crop health and yields, forest carbon stocks, soil moisture, urbanisation, snow and ice cover, water quality and quantity, and mass movements such as landslides and flooding.

Translating the vast and increasing volumes of EO data into actionable information poses a technical and societal challenge demanding Big Data infrastructure and expertise, analytics, corresponding visualisations, and international cooperation and coordination. Despite major progress in satellite technology and data analysis, the robust operational monitoring and analysis systems that can produce quality-assessed EO products in a form that can be used by non-specialists are not always available. 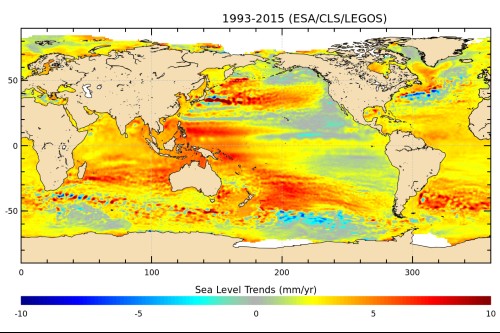 This map shows changes in sea surface height between 1993 and 2015 derived from several satellite missions carrying an instrument called a radar altimeter, which measures the height of the oceans with high accuracy. The mean global rate over this time period was just over 3 mm/year but some regions, such as the Western Pacific have been going up much faster than this at around 1 cm/year.Courtesy of ESA

The report identifies three key focus areas to ensure EO is fit for purpose and optimised, as follows:

Co-lead author Paul Bates FRS, Professor of Hydrology at the University of Bristol and Associate Director of the Cabot Institute for the Environment, who is leading the university’s COP26 activities, said: “Free-to-use satellite data can transform the ability of countries around the world to manage the threat of climate change, but only if countries like the UK share their expertise and technology.”

Established in 2020, the COP26 Universities Network aims to improve access to evidence and academic expertise for the UN Climate Summit in Glasgow for the UK Government, NGOs and the international community, working together to help deliver ambitious climate change outcomes.