Wetland methane cycling increased during a rapid global warming event 56 million years ago and could foreshadow changes the methane cycle will experience in the future, according to new research led by the University of Bristol.

Wetlands are the dominant natural source of atmospheric methane, a potent greenhouse gas which is second only to carbon dioxide in its importance to climate change. Anthropogenic climate change is expected to enhance methane emissions from wetlands, resulting in further warming. However, wetland methane feedbacks were not fully assessed in the Intergovernmental Panel on Climate Change (IPCC) Fifth Assessment Report, posing a challenge to meeting the global greenhouse gas mitigation goals set under the Paris Agreement.

To understand how wetland methane cycling may evolve and drive climate feedbacks in the future, scientists are increasingly looking to Earth’s past.

“Ice core records indicate that atmospheric methane is very sensitive to climate, but we cannot measure atmospheric methane concentrations beyond them, prior to about 1 million years ago," said Dr Gordon Inglis, lead author and Royal Society Dorothy Hodgkin Fellow at the University of Southampton.

"Instead, we must rely on indirect 'proxies' preserved within the sedimentary record. Proxies are surrogates for climate variables that cannot be measured directly, including geochemical data stored in fossils, minerals or organic compounds.”

The study, which was published in Geology, is the first to directly resolve the relationship between temperature and wetland methane cycling during the Paleocene-Eocene Thermal Maximum (PETM), an ancient warming event that could offer a glimpse into the future.

The authors used a geochemical tool developed at the University of Bristol to analyse organic compounds made by microbes living in ancient soils and peats. During the PETM, they found the ratio of two carbon isotopes changed in these compounds - a change that was likely due to an increased amount of methane in the microbes’ diet.

“We show that the PETM was associated with an increase in wetland methane cycling; if some of this methane escaped into the atmosphere, it would have led to additional planetary warming.  Crucially, this could foreshadow changes that the methane cycle will experience in the future due to anthropogenic emissions,” said Dr Gordon Inglis.

“Our colleagues have previously shown the inclusion of methane emissions in climate model simulations is critical for interpreting past warmth. However, until recently, there have been no tools to test these predictions. This study confirms that methane cycling increased during the PETM, and perhaps during other warming events in Earth history,” said Professor Rich Pancost, Head of the School of Earth Sciences at the University of Bristol.

Intriguingly, proxies for temperature and methane cycling are only coupled at the onset of this ancient warming event, with the methane proxies rapidly returning to pre-event values even though temperatures remain high for the duration of the PETM. This suggests it is the onset of rapid global warming that is particularly disruptive to methane cycling in wetlands, a finding that is particularly concerning given the rapid global warming we are experiencing now.

This collaborative study is an output from ‘The Greenhouse Earth System’, an Advanced Grant awarded via the European Research Council (ERC) to Rich Pancost. Funding was also received from the Natural Environment Research Council and The Royal Society. 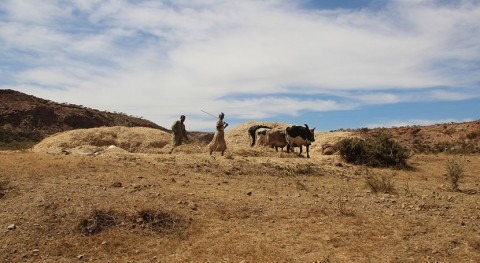