When it comes to testing drinking water for dangerous contaminants, such as heavy metals like lead or cadmium, continuous testing directly from faucets people drink from is important. Yet, very little of this kind of water testing is done. A team from UC San Diego and the campus spinout Quantitative BioSciences is working to improve the situation.

She hopes this work will produce affordable water testing systems that can be installed at the faucets that people actually drink from. The water that was leaving the treatment plant in Flint Michigan, for example, didn’t have dangerously high levels of lead. But by the time that same water poured from faucets of Flint residents, lead was in the water.

A team from UC San Diego and Quantitative BioSciences has a new approach to continuous monitoring of heavy metal contamination in drinking water using bacteria as sensors of contamination. The team recently published their advances in the journal Proceedings of the National Academy of Science (PNAS).

“Our top priority is to do work we feel proud of and will have an impact,” said Cookson.

While some options for residential water testing of heavy metals do exist, there are technical, cost and logistical limitations that are getting in the way of widespread, continuous monitoring of tap water inside homes, schools and farms. The San Diego team is looking to remove these barriers.

E. coli as the water testers

The new water monitoring approach relies on harmless strains of E. coli bacteria to actually detect heavy metal contaminants. While E. coli makes headlines in connection with food poisoning, harmless strains of the microbe are used in labs around the world for many different research purposes.

They are the lab rats of the bacterial world.

“Ok E. coli,” said Nick Csicsery. “If arsenic is there and you know it, let us know.”

Sometimes the E. coli knew and sometimes they didn’t, “depending on the metal,” explained Csicsery. He recently earned his bioengineering Ph.D. in the Hasty lab at UC San Diego and has joined Quantitative BioSciences, where he’s working on developing synthetic biology-based monitoring techniques. 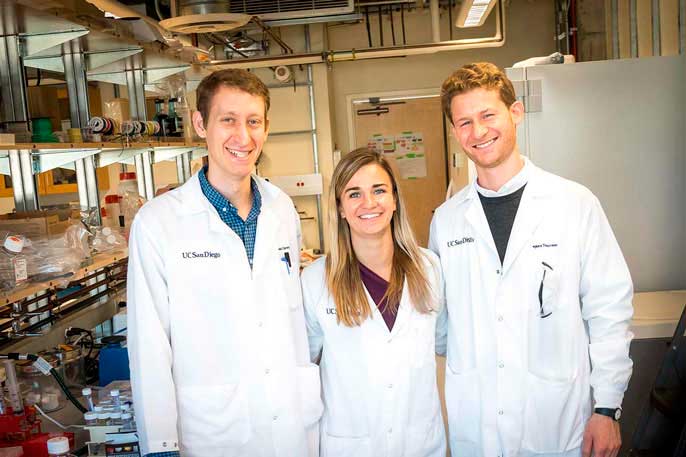 How do these microbes “let us know” about the presence of a dangerous heavy metal in the water?

The answer is that bacterial genomes react to contaminants in ways that humans have learned to recognize.

“We have access to the code of life that surrounds us,” said Gregoire Thouvenin, a UC San Diego bioengineering Ph.D. student and another of the co-first authors on the PNAS paper. “When you’re studying microbes, you dig deeper and you realize they are more connected to everything else than you initially thought.”

In this case, harnessing these connections required researchers from many fields including bioengineering, synthetic biology, microfluidics, mathematics and data science to combine forces. The result is a system that monitors water for two weeks and recognizes when contaminants in the water change the genetic behavior of 2,000 different strains of bacteria.

In this bacteria-driven water testing system, each strain of bacteria lives inside its own small chamber, and all 2,000 strains are lined up in the same chip made of a hard translucent material. There are tiny channels that deliver water, contaminants and food to each of the chambers in a controlled way.

These 2,000 bacterial strains each have a bit of genetic material inserted into a small circular piece of its DNA (a plasmid) that enables a fluorescence output to “highlight” the activity of a specific gene. When a water contaminant interacts with the inserted gene, the bacteria light up.

With their microfluidics setup, the researchers can record which strains light up when. This pattern of blinking is recorded and fed into an artificial intelligence system. The outcome is an automated ability to identify when the bacteria encounter specific heavy metal contaminants in the water, based on the pattern of lights being produced by the bacteria. Bioengineering Ph.D. student Garrett Graham led the data science and artificial intelligence part of the project. (He graduated and is working as a climate data analyst at the North Carolina Institute for Climate Studies.)

The idea is for the systems to be installed in places where people actually drink water, in order to identify contaminated water.

While the researchers chose heavy-metal identification in order to demonstrate the power and flexibility of their system, the artificial intelligence components of it could be trained to identify other contaminants as well.

The art and science of making

One of the big advances for this project was figuring out how to design, build and run the system for inserting, housing, feeding and keeping track of the 2,000 different strains of bacteria over the course of two weeks.

Lizzy Stasiowski and Nick Csicsery led the design and fabrication of the system which allows for all 2,000 E. coli strains to be loaded into the system at once.

This project merged the art and science of “making” with synthetic biology, genomic analysis and machine learning, to create a system poised to do good in the world.

“One of my favorite things about this project is how versatile it can be. Our system allows you to monitor dynamic changes in gene expression for thousands of bacterial strains simultaneously to any environmental change. It’s a project that’s relevant for both industry and academia,” said Stasiowski.

She recently finished her bioengineering Ph.D. at UC San Diego and is a Vertex Pharmaceuticals Fellow in San Diego working on instrumentation research and development.

“While I find the focus on heavy metals interesting in terms of a careful proof of concept, I am most excited about the technology as a screening tool for researchers and companies that focus on synthetic biology,” said Jeff Hasty, a UC San Diego professor of bioengineering and biology who is the senior author on the PNAS paper. “The technology is well-positioned for the discovery of genes that respond to complex signals that are found in environmental and medical applications.”

Used as a screening tool, the platform’s unique combination of microfluidics and artificial intelligence could help shed new light on the mechanisms that enable cells to interpret and react to changing environments, and enable the testing of synthetic strains designed to interact with the environment in new ways. Existing screening techniques rarely have both the temporal resolution and throughput needed to do so. Hence the platform has the potential to be of great value to both synthetic biologists (who design and implement new functions in living cells) and systems biologists (who build comprehensive models of all reactions occuring in a cell).

Thouvenin waxed a bit more philosophical. “Living things around us are malleable and they’ve been beautifully shaped and crafted by evolution over millions of years. And now we have access to that, both in terms of understanding it, repurposing it, and ultimately optimizing it for a changing world.”

What’s in your drinking water? 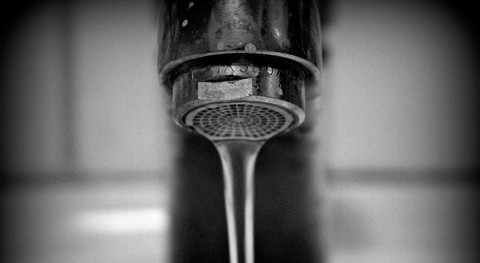