In 1919, the Swiss pilot and photographer Walter Mittelholzer flew over Mont Blanc in a biplane photographing the alpine landscape. Exactly 100 years later, researchers from the University of Dundee in Scotland have recreated his photographs to show the impact that climate change has had upon the mountain's glaciers.

In August 2019, one century after the biplane flight, Dr Kieran Baxter and Dr Alice Watterson from the 3DVisLab at Duncan of Jordanstone College of Art and Design, part of the University of Dundee, flew over the Mont Blanc massif to repeat three of Mittelholzer’s photographs of the glaciers.

By using a process called monoplotting to triangulate the original camera position in airspace, the pair used the peaks and spires of the alpine landscape as anchor points to find the geolocation of where the historical shots were taken. The resulting photographs of the Argentiere, Mont Blanc Bossons and Mer de Glace glaciers show the large scale of ice loss in the region.

Dr Baxter, equipped with waypoints from the digital analysis and multiple GPS devices, hung from the side of the helicopter as it hovered at a height of around 4,700 metres, just below the summit of Mont Blanc, to capture the photographs. 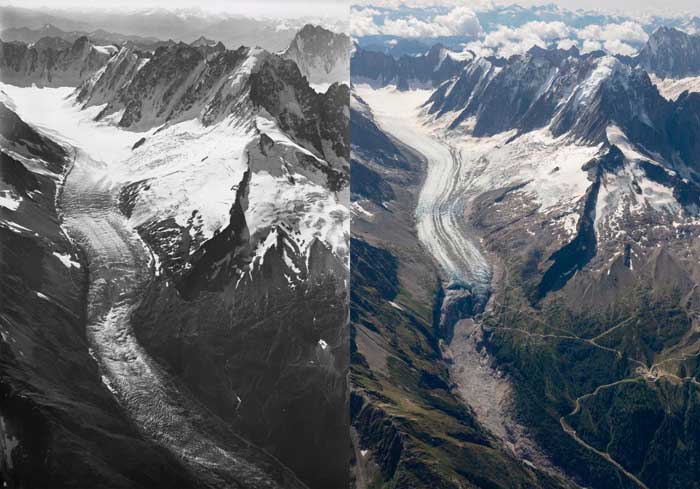 He said, “The scale of the ice loss was immediately evident as we reached altitude but it was only by comparing the images side-by-side that the last 100 years of change were made visible. It was both a breathtaking and heartbreaking experience, particularly knowing that the melt has accelerated massively in the last few decades.

“Mittelholzer played a key role in popularising commercial air travel in Switzerland, an industry which ironically came to contribute to the warming of the climate and the detriment of the alpine landscapes that the pioneering pilot knew and loved.

“When working at these heights there is currently no viable emission-free alternative so airtime is kept as brief as possible and careful planning goes into getting the most out of a photography flight like this one. Luckily, clear weather allowed these repeat aerial photographs to be taken on the centenary of the originals. Unless we drastically reduce our dependence on fossil fuels, there will be little ice left to photograph in another hundred years.”

The pairs work can be viewed in full via The Guardian. 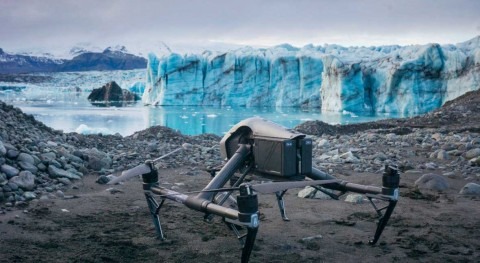