General258
University of Illinois
With our land-grant heritage as a foundation, we pioneer innovative research that tackles global problems and expands the human experience. Our transformative learning experiences, in and out of the classroom.
TwitterFacebookYoutubeWeb

North America’s inland watersheds hold and provide 95% of the continent’s fresh water and 20% of the world’s fresh water, but the infrastructure used to manage those water systems has led to problems that include soil and water degradation.

“Water has its own flow and nature and culture around it,” McGuire said, and the “over-engineering” and manipulation of the landscape has had detrimental effects in the form of ecological deterioration.

For example, excessive drainage of Midwestern land for agriculture has resulted in degradation of the soil through erosion. The flow of pollutants into the Mississippi River from both farmland and the Chicago area has created a hypoxic zone in the Gulf of Mexico.

With their training in studying how humans engage with natural systems, landscape architects are uniquely suited to think about such problems, from the scale of a garden to a city to a regional watershed, McGuire said. 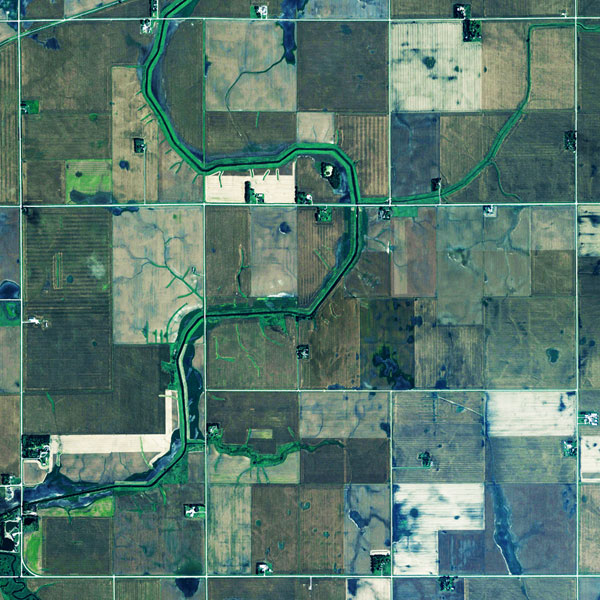 This image of Iowa farmland shows an agricultural drainage network juxtaposed with the locations of former wetlands (the dark mottled areas). The image reveals how drainage design across the Midwest has ignored natural hydrology in favor of systematic control over the land for commodity production, resulting in the loss of vital natural wetlands and ecosystems. Courtesy UDSA Farm Service Agency and Google

Much of the focus on water systems has been on coastal waterways because of rising sea levels, but inland waters are major sources of fresh water. The book focuses on major inland watersheds – the Great Lakes and the St. Lawrence River, the Mississippi River and the Nelson River in Manitoba.

The book is divided into three themes. WaterLines looks at lines of control, whether legal, jurisdictional or physical, such as levees. WaterSheds considers the terrain and soil in a watershed. WaterBodies is concerned with hydro-social issues, or how people relate to water.

McGuire writes in one of the book’s essays about her research project in Chicago examining how the flow of rainwater off pavement overwhelms the stormwater system during large storms and results in flooding. She is looking at designing surfaces to emphasize soils rather than pavement, so more rainwater is absorbed into the ground.

“We need to start to embrace water as something we live with, so flooding is something we design for rather than something we see as a negative or something we try to get rid of,” McGuire said. The focus needs to be “less engineering and more design resilience work, so landscape is doing more of the work, not a wall or a pipe.”

She hopes the book will encourage a broader view of landscape projects. For example, shortly after the construction of the Chicago Riverwalk was completed, sewage water flooded it and the restaurants lining the walk.

“It’s a complicated urban water situation, and you can’t solve systemic water problems at the edge,” McGuire said. “You have to work back in the system and think about how it affects everything before the water gets there, through good infrastructure practices. We’re trying to bring design and research together and elevate the conversation with state agencies and engineers. We need to be there with them, reimagining water at a larger scale.”

The book also emphasizes the need for landscape architects to be part of the policy development process with governments.

Researchers already have formed partnerships to work on problems affecting watersheds. Farmers in northeastern Illinois are looking at ways to change their farming practices so the soil acts more like a sponge than a sieve and fewer nutrients are washed away. The U.S. Army Corps of Engineers uses soil dredged from the Great Lakes to remake land in other areas. McGuire is partnering with the Metropolitan Water Reclamation District in Chicago on her work addressing flooding issues in the city.

“Landscape architects who have always thought at these larger scales are thinking about how to have conversations with other disciplines. It’s incredibly challenging work, and slow, because we have different languages spoken across the different disciplines,” McGuire said.

The work is important not only to protect sources of fresh water, but also to plan for the effects of climate change, she said.