Mineral-rich waters originating from the Apennine Mountains of Italy flowed through ancient Rome’s Anio Novus aqueduct and left behind a detailed rock record of past hydraulic conditions, researchers said. Two studies characterizing layered limestone – called travertine – deposits within the Anio Novus are the first to document the occurrence of anti-gravity growth ripples and establish that these features lend clues to the history of ancient water conveyance and storage systems. 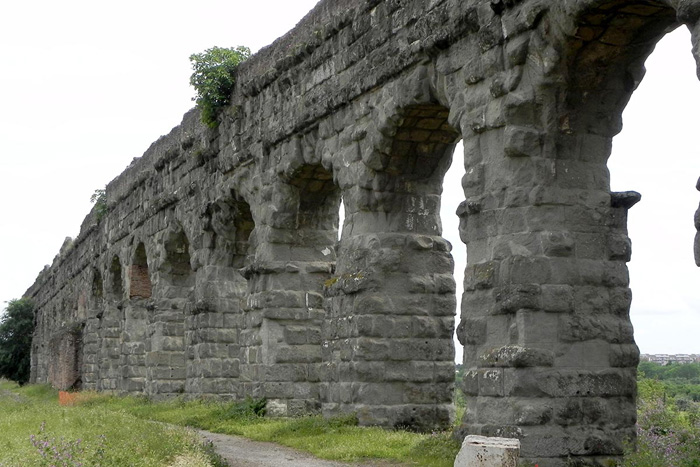 As the water – sourced from the Anio River and an underground lake near Subiaco, Italy – flowed, it left behind rippled layers of calcium carbonate travertine that accumulated along the inside floors, walls and ceilings of the Anio Novus aqueduct. 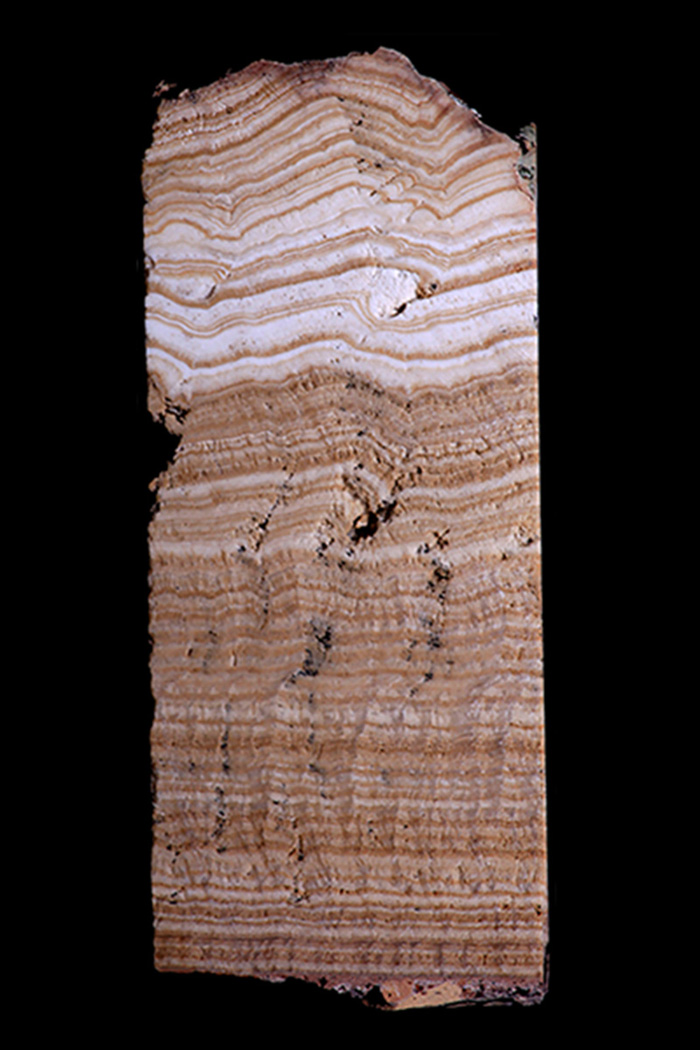 Previous studies have proposed, without evidence, that the layers in the Anio Novus travertine are the result of changes in flow rate initiated by seasonal change or engineering methods put in place by the Romans, the researchers said. However, travertine with similar layering forms in ancient aqueduct systems occurs worldwide, regardless of regional climate or operation.

Fouke’s specialty is interpreting how microbes thriving in mineral-rich waters influence the crystalline architecture of travertine and other similar mineral deposits in nature. His group has worked extensively to reveal the geologic history of layered mineral formations – yielding inferences to life on Mars via Yellowstone to coral reefs in Australia – and even inside the human body.

“The Subiaco waters are chemically similar to the waters of Yellowstone National Park, where waterborne microbes form mats and biofilms that play a critical role in the shape and structure of the famous stepped travertine features of Mammoth Hot Springs,” Fouke said. “We’ve also identified fossil microbes and plant debris in the dark layers of the Anio Novus travertine deposits. Once we realized the similarity between Subiaco and Yellowstone waters, we knew we had the knowledge base and experience required to start unraveling the history and mystery of the last flow of the Anio Novus, the longest and most significant of the ancient Roman aqueducts.”

Fouke and Marcelo Garcia – a civil and environmental engineering professor at the U. of I. and study co-author – worked with their teams to meticulously measure the geometry of the rippled layers of the Anio Novus travertines to make an unusual interpretation.

“A geologist will tell you that the only way to form ripples is through fluid shear and gravity-dependent sediment transport,” Fouke said. “The theory is that water or wind can move loose sediment into wavelike shapes that slowly advance and are influenced by gravity to form the familiar asymmetric ripple shapes we see along riverbanks, dunes and in the ancient sedimentary rocks deposited in these environments.”

However, Fouke’s team posits that the Anio Novus travertine crystals precipitated, grew and accumulated in the flowing water of the aqueduct – independent of the forces of gravity and aided by the shape and biochemical composition of microbial colonies – to form what they call “travertine crystal growth ripples.” 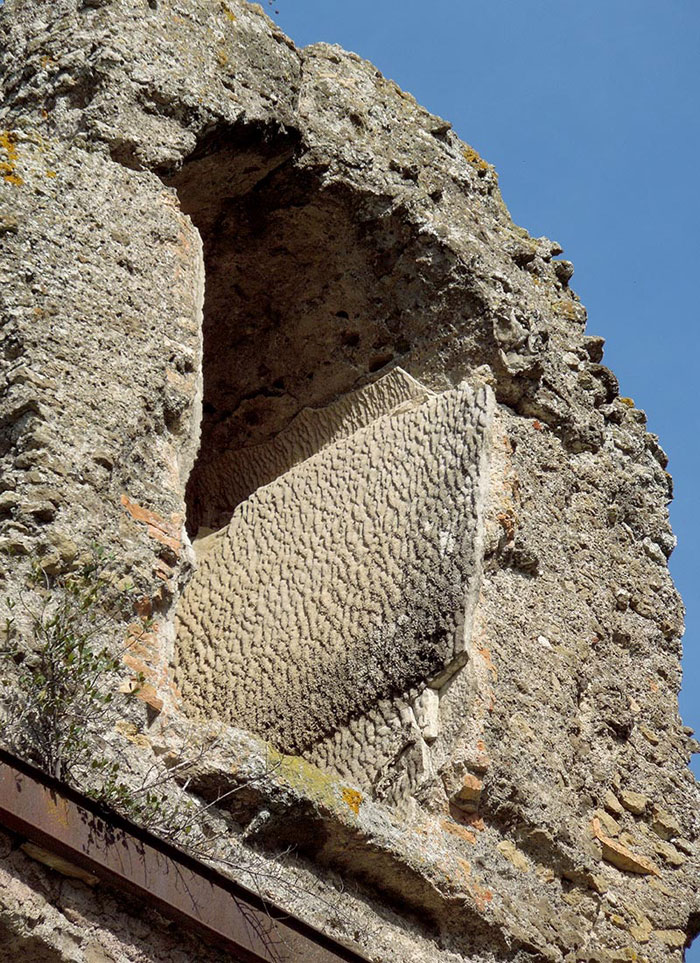 Convinced that the structures are ripple marks that reflect flow, Garcia and his team measured the ripple geometries to reconstruct the volume and velocity of water flowing through the aqueduct during ancient Roman times.

“Since few researchers had ever recognized these structures as ripples before, no one had used the power of the shape of a ripple, together with fluid mechanics principles, to produce this kind of reconstruction,” Garcia said.

Using the travertine deposited in immediate contact with the original aqueduct mortar, researchers conclude that when the aqueducts were first turned on, the water flowed through at a rate of about one meter per second – fast enough to flood a football field within an hour – much faster than previously hypothesized.

The fact that rippled travertine exists along the ceilings of the aqueduct channels indicates that they operated at capacity, the researchers said. This observation suggests that previous studies were incorrect in stating that the layers formed due to seasonal flow change or when Romans used engineering means to control the flow rate.

“These aqueducts were far more robust than ever realized,” Fouke said. “The flow was greater than envisioned, and that rate of flow was constantly maintained.”

The researchers are now extracting the ancient fossilized microbes and their biomolecules trapped in the travertine to learn more about what kind of microbes – and possible pathogens – the Romans were drinking.

“Historians and archeologists are keenly interested in what led to the fall of the Roman Empire,” Fouke said. “Given that the aqueducts played a major role in the Romans’ success, any information gleaned from the aqueducts’ demise can be useful in this endeavor.”

The Andrew W. Mellon Foundation, the Italian government, the British Academy and British School at Rome, the M.T. Geoffrey Yeh Endowed Chair in Civil Engineering, the Ed and Barbara Weil fund for Universal Biomineralization at the U. of I., and NASA supported this study. 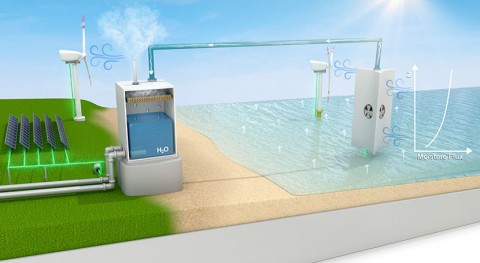 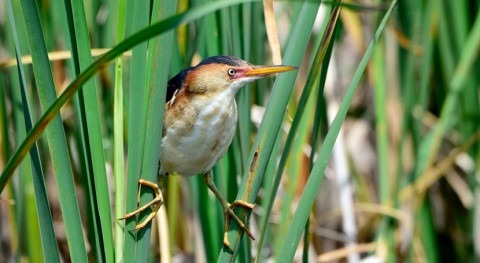 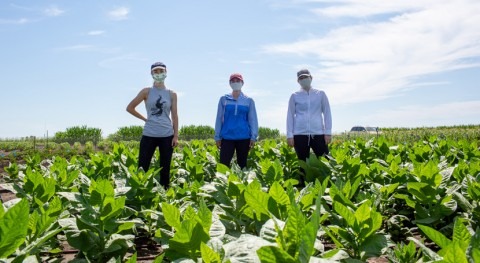 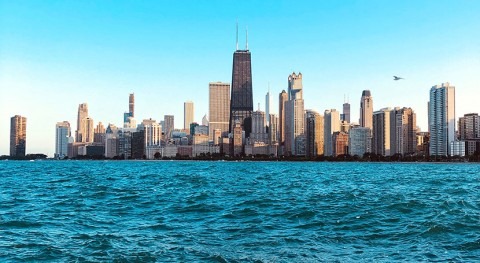