The University of Luxembourg and the start-up RSS-Hydro are working together to optimise the prediction of flooding in Burange in the south of Luxembourg. Supported by the City of Dudelange, the project aims at building a unique and precise urban terrain model with the help of drones, aerial and satellite images to feed state-of-the art flood models.

This phenomenon is observed with increasing frequency and intensity and is probably linked to climate change. “Floods and especially flash floods in urban areas are some of the main natural hazards in Europe and worldwide that are fuelled by shorter and more severe weather events amidst otherwise prolonged dry periods”, says Professor Norman Teferle who leads the Geodesy and Geospatial Engineering group at the University of Luxembourg.

In their paper "Towards a high-resolution drone-based 3D mapping dataset to optimise flood hazard modelling", the team provided an overview of the local flooding problem and presented the initial prove of concept studies for this project.

Researchers from the Geodesy and Geospatial Engineering group within the Department of Engineering at the University of Luxembourg with scientists from the technology start-up RSS-Hydro have joined their forces in 3D imaging technologies, remote sensing and hydrology to accelerate research of urban flooding.

The University of Luxembourg provides the geospatial expertise. “We are applying innovative 3D imaging technologies from low altitude drone platforms, aeroplanes and satellites to generate a multimodal/multiscale topographic dataset in order to optimise urban flood modelling. The geodetically quality controlled data set we are creating is unique in the world and will help to gain a better understanding about the strength, progress and scale of urban flash flooding events”, explains Dietmar Backes, doctoral researcher at the University of Luxembourg who coordinates the project. 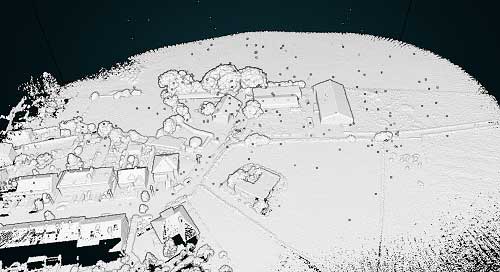 This large data base provides the key to establish a detailed digital model required to optimize urban flood modelling and push the accuracy and efficiency of  flood inundation predictions, which are currently conducted by RSS-Hydro. “To my knowledge this is one of the few occasions in which flood modelers have worked hand in hand with geodetic experts despite the apparent need for such a multi-disciplinary approach“, says Dr Guy Schumann, CEO and lead scientist at RSS-Hydro.

Support from the city and citizens

RSS-Hydro, together with the University of Luxembourg, outlined the need of such a scientific study to the City of Dudelange chief engineer, who was eager to support this project and very much welcomed the idea that it would not only advance flood engineering studies but also be part of a PhD research project.

In the past, in particular in 2016, the study area has been hit by urban flash flooding. This study will provide a better understanding of the problem, support local innovation but also address the concerns of residence who suffer from frequent flooding.

In addition, the study has been very well received by the community. “The support of the local population is key for the project we initiated. Although with brought support and all necessary authorisations from the local council, we still needed the agreement and understanding of the local residents, especially for the capture of the high-resolution data with laser scanners and drones. All of the enquiries and questions from the population were relatively easy to address and many critical voices became supporters of the project. We periodically receive emails from residents who provide photographic evidence of the flash flooding  that we can compare to our simulations”, comments Dietmar Backes.