General268
University of Washington
Founded in 1861 by a private gift of 10 acres in what is now the heart of downtown Seattle, the UW is one of the oldest public universities on the West Coast.
TwitterFacebookLinkedInYoutubeWeb

In a rapidly changing Arctic, one area might serve as a refuge – a place that could continue to harbor ice-dependent species when conditions in nearby areas become inhospitable. This region north of Greenland and the islands of the Canadian Arctic Archipelago has been termed the Last Ice Area. But research led by the University of Washington suggests that parts of this area are already showing a decline in summer sea ice.

Last August, sea ice north of Greenland showed its vulnerability to the long-term effects of climate change, according to a study published July 1 in the open-access journal Communications Earth & Environment.

“Current thinking is that this area may be the last refuge for ice-dependent species. So if, as our study shows, it may be more vulnerable to climate change than people have been assuming, that’s important,” said lead author Axel Schweiger, a polar scientist at the UW Applied Physics Laboratory. 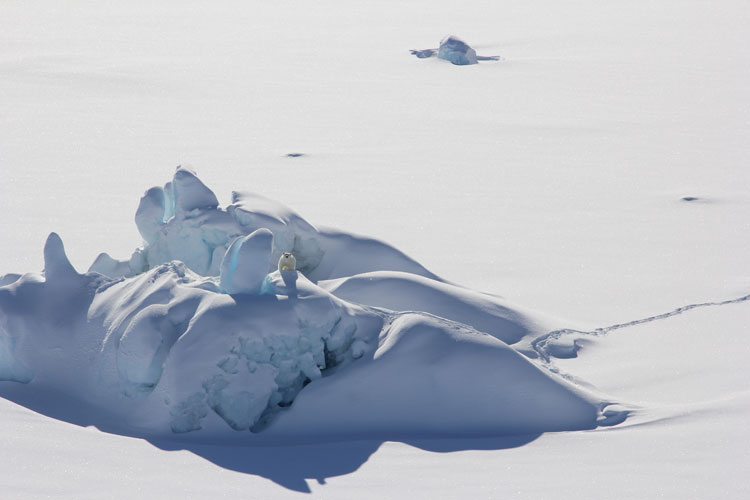 A polar bear is perched on a thick chunk of sea ice north of Greenland in March 2016. These thicker, older pieces of sea ice don’t fully protect the larger region from losing its summer ice cover.Kristin Laidre/University of Washington

“This area has long been expected to be the primary refuge for ice-dependent species because it is one of the last places where we expect summer sea ice to survive in the Arctic,” said co-author Kristin Laidre, a principal scientist at the UW Applied Physics Laboratory.

The study focused on sea ice in August 2020 in the Wandel Sea, an area that used to be covered year-round in thick, multiyear ice.

“Sea ice circulates through the Arctic, it has a particular pattern, and it naturally ends up piling up against Greenland and the northern Canadian coast,” Schweiger said. “In climate models, when you spin them forward over the coming century, that area has the tendency to have ice survive in the summer the longest.”

Like other parts of the Arctic Ocean, the ice here has been gradually thinning, though last spring’s sea ice in the Wandel Sea was on average slightly thicker than previous years. But satellite images showed a record low of just 50% sea ice concentration on Aug. 14, 2020.

The new study uses satellite data and sea ice models to determine what caused last summer’s record low. It finds that about 80% was due to weather-related factors, like winds that break up and move the ice around. The other 20%, or one-fifth, was from the longer-term thinning of the sea ice due to global warming. 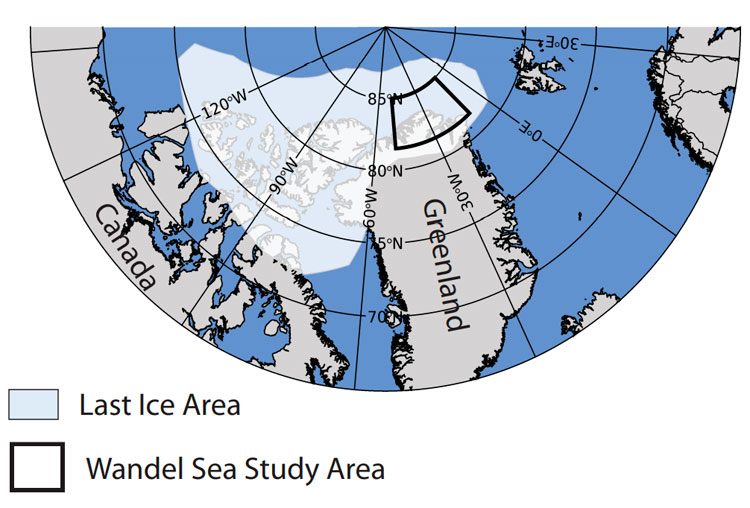 The study looked at the Wandel Sea north of Greenland, which is inside what’s known as the “Last Ice Area” of the Arctic Ocean.Schweiger et al./Communications Earth & Environment

The model simulated the period from June 1 to Aug. 16 and found that unusual winds moved sea ice out of the area, but that the multiyear thinning trend also contributed, by allowing more sunlight to warm the ocean. Then, when winds picked up, this warm water was able to melt the nearby ice floes.

The record-low ice concentration in 2020 was surprising because the average ice thickness at the beginning of summer was actually close to normal.

“During the winter and spring of 2020 you had patches of older, thicker ice that had drifted into there, but there was enough thinner, newer ice that melted to expose open ocean,” Schweiger said. “That began a cycle of absorbing heat energy to melt more ice, in spite of the fact that there was some thick ice. So in years where you replenish the ice cover in this region with older and thicker ice, that doesn’t seem to help as much as you might expect.”

The results raise concerns about the Last Ice Area but can’t immediately be applied to the entire region, Schweiger said. Also unknown is how more open water in this region would affect ice-dependent species over the short and long terms.

“We know very little about marine mammals in the Last Ice Area,” said Laidre, who is also an associate professor in the School of Aquatic and Fishery Sciences. “We have almost no historical or present-day data, and the reality is that there are a lot more questions than answers about the future of these populations.”

Other co-authors are Michael Steele and Jinlun Zhang at the UW; and Kent Moore at the University of Toronto. The research was funded by the U.S. National Science Foundation, NASA, the Natural Sciences and Engineering Research Council of Canada; the National Oceanic and Atmospheric Administration; the Office of Naval Research; and the World Wildlife Fund Canada.