A study in the issue of Nature indicates the increase in rainfall forecast by global climate models is likely to hasten the release of carbon dioxide from tropical soils, further intensifying global warming by adding to human emissions of this greenhouse gas into Earth’s atmosphere.

Based on analysis of sediments cored from the submarine delta of the Ganges and Brahmaputra rivers, the study was conducted by an international team led by Dr. Christopher Hein of William & Mary’s Virginia Institute of Marine Science. Collaborators include Drs. Valier Galy of the Woods Hole Oceanographic Institution, Muhammed Usman of the University of Toronto, and Timothy Eglinton and Negar Haghipour of the Swiss Federal Institute of Technology in Zurich (ETH Zurich). Major funding was provided by the U.S. National Science Foundation.

“We found that shifts toward a warmer and wetter climate in the drainage basin of the Ganges and Brahmaputra rivers over the last 18,000 years enhanced rates of soil respiration and decreased stocks of soil carbon,” says Hein. “This has direct implications for Earth’s future, as climate change is likely to increase rainfall in tropical regions, further accelerating respiration of soil carbon, and adding even more CO2 to the atmosphere than that directly added by humans.” 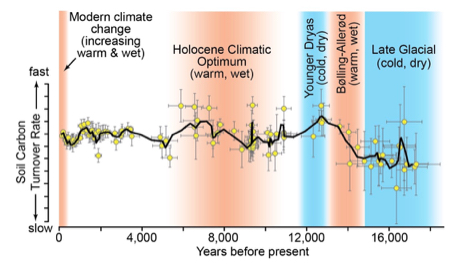 Sediment cores collected from the offshore fan deposited by the Ganges and Brahmaputra rivers shows that a shift towards warmer and wetter climate over the last 18,000 years has increased the turnover rate of soils in the drainage basin of the two rivers.  Dr. Valier Galy, WHOI.

Soil respiration refers to release of carbon dioxide by microbes as they decompose and metabolize leaf litter and other organic materials on and just below the ground surface. It’s equivalent to the process in which larger multicellular animals—from snails to humans—exhale CO2 as a byproduct of metabolizing their food. Roots also contribute to soil respiration at night, when photosynthesis shuts down and plants burn some of the carbohydrates they produced during daylight.

The team’s study is based on detailed analysis of three sediment cores collected from the ocean floor seaward of the mouth of the Ganges and Brahmaputra rivers in Bangladesh. Here, the world’s largest delta and submarine fan were built by the prodigious volume of sediments eroded from the Himalayas. The two rivers carry more than a billion tons of sediment to the Bay of Bengal each year, more than five times that of the Mississippi River.

The cores record the environmental history of the Ganges-Brahmaputra drainage basin during the 18,000 years since the last Ice Age began to wane. By comparing radiocarbon dates of bulk sediment samples from these cores with samples from organic molecules known to be derived directly from land plants, the researchers were able to gauge changes though time in the age of the sediments’ parent soils.

Their results showed a strong correlation between runoff rates and soil age—wetter epochs were associated with younger, rapidly respiring soils; while drier, cooler epochs were linked to older soils capable of storing carbon for longer periods.

The wetter periods themselves correlate with the strength of the Indian summer monsoon, the primary source of precipitation across India, the Himalayas, and south-central Asia. The researchers confirmed changes in monsoon strength using several independent lines of paleoclimatic evidence, including analysis of oxygen-isotope ratios from Chinese cave deposits and the skeletons of open-ocean phytoplankton.

The magnitude of the correlation discovered by Hein and colleagues corresponds to a near doubling in the rate of soil respiration and carbon turnover in the 2,600 years following the end of the last Ice Age, as India’s summer monsoon strengthened. “We found that a small increase in precipitation values corresponds to a much larger decrease in soil age,” says Hein.

An earlier paper by Hein, Galy, and colleagues reported a threefold increase in annual rainfall in the Ganges-Brahmaputra river basin since the last Ice Age. This new study shows that upturn in precipitation led to a halving of soil age due to more rapid soil turnover.

Hein says that “small changes in the amount of carbon stored in soils can play an outsized role in modulating atmospheric CO2 concentrations and, therefore, global climate, as soils are a primary global reservoir of this element.”

The current concentration of carbon dioxide in Earth’s atmosphere—416 parts per million—equates to about 750 billion tons of carbon. Earth’s soils hold around 3,500 billion tons—more than four times as much.

Previous research has highlighted the threat that global warming poses to the permafrost soils of the Arctic, whose widespread thawing is thought to be releasing up to 0.6 billion tons of carbon to the atmosphere each year.

“We’ve now found a similar climate feedback in the tropics,” says Hein, “and are concerned that enhanced soil respiration due to greater precipitation—itself a response to climate change—will further increase concentrations of CO2 in our atmosphere.” 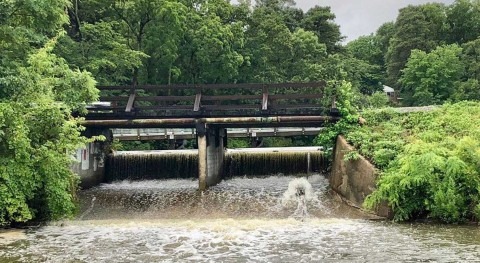