Kinene, a nine-year-old boy living along the shore of Lake Victoria, needs clean water to wash fish with his mother. This is the only source of income of his family, a family that, as most of the 30 million people living on the largest lake in Africa, suffers the consequences of its high level of pollution.

This is the story of Kinene, a nine-year-old boy who lives in Ggaba, Uganda. Every morning he accompanies his mother to the shore of the lake to find work washing and drying fish before taking it to the market. But his difficult task is to find clean water; it is too expensive for his family to buy water from the supply sources that are secured with locks, and therefore he is forced to use the water from the lake, which is polluted by garbage, waste water, pesticides and industrial waste.

Lake Victoria is located in the mid-eastern zone of Africa, with shores in Uganda, Tanzania and Kenya. It stretches along an area of 69.482 km2, reaching 82 m. in its deepest point. It is the second largest body of freshwater in the world, after Lake Superior in North America.

Around 20 out of the 30 million people that live on the shores of this lake depend mainly on fishing, an activity that has suffered greatly due to the high level of pollution of the water, the illegal catches or the ecological imbalance caused by the invading species introduced years ago, such as the Nile Perch (Lates niloticus). 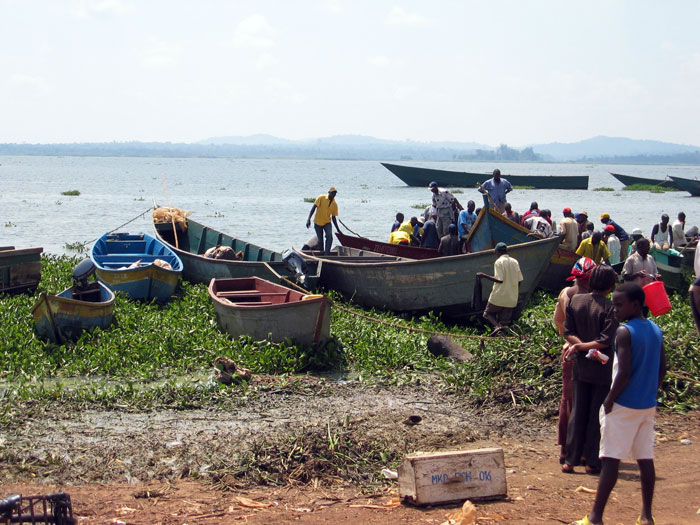 Many children that live in places with the same conditions as Kinene suffer diseases such as malaria, cholera and diarrhoea. According to the UN, Lake Victoria has become a sad example of the ravages of water-borne infectious diseases on children in most areas in the world. We need to be reminded that a child dies every 20 seconds of a disease linked to waste water, and that these diseases are the leading cause of death of children under 5 years of age.

United Nations is searching for ecological alternatives to end this problem and the lakeside governments are planning to build water treatment plants and sewage systems, which nowadays are present in only 10% of the lakeside villages and towns. Some of the smaller communities along the shore of the lake are now using ecological toilets and are turning human waste into fertilizers thanks to the support of the United Nations Development Programme (UNDP). All these measures avoid the filtering of waste into the water supply.

Kinene, who has lived surrounded by diseases, has a dream for when he grows up: to be a doctor and be able to cure and treat everyone in his community. Right now he only wishes his government would help by installing clean water taps.