In many volcanic eruptions it is not only the lava and the flows of gases and debris that are lethal. Water can combine with them, accelerating the force and scope of the destruction, creating lahars. This is a phenomenon that is sometimes difficult to assess and increases the risk of the more than 800 million people living near volcanoes. Climatic change is altering disaster prevention strategies. 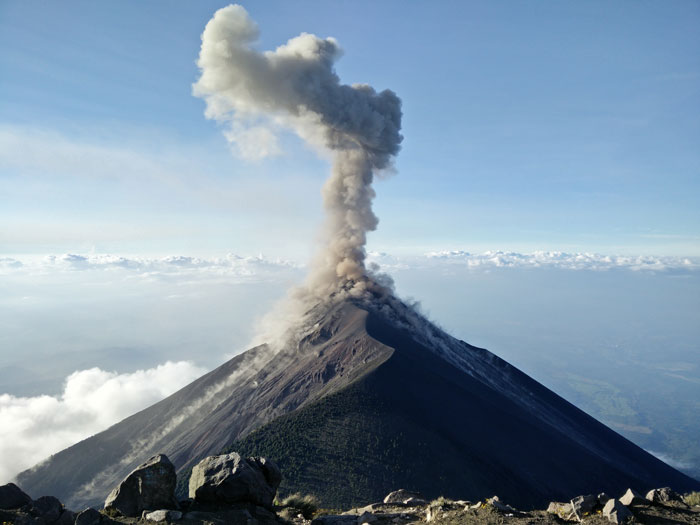 The inhabitants of the Guatemalan villages in the department of Escuintla are used to the explosions of the Fuego volcano. For this reason, when the great mountain roared in the early morning of the 3rd June 2018, the day-to-day life of the farmers in this region of southern Guatemala was not altered. There were no emergency warnings; fifteen days earlier, smoke was already visible around the crater of the volcano, something common as well. Five hours later, before noon, a violent eruption started with a 10,000-meter high smoke column. At four o’clock in the afternoon hell came in the form of the dreaded pyroclastic flows, also known as “burning clouds”: a combination of gases, ash and different-sized rocks, which very rapidly slides at floor level at a very high temperature. More than 60 people were burned to death in a few minutes and over 4,000 were evacuated. The eruption was catalogued as the largest of the Fuego volcano since 1974.

After the incandescent avalanche, the intense rains at that time of the year dragged ashes and rocks originating what are called “lahars”, mud and volcanic debris avalanches that devastated everything they found in the beds of many rivers and streams in the foothills of the mountain. According to the Guatemalan National Coordinator for Disaster Reduction (CONRED by its Spanish initials), a total of more than 1.7 million people were affected by this episode. Lahars destroyed most of the water supply infrastructure, leaving large areas with no supply, among them very poor ones.

800 million within reach of volcanoes

The We Are Water Foundation collaborated with World Vision, in the reconstruction of the affected facilities in Siquinalá, one of the towns whose urban area is located in the outlet channels of volcanic residual material, turning it into a highly vulnerable area to lahars. The aim of the intervention was to restore the supply with facilities protected against lahars, and also to provide residents with alternative water collection systems that guarantee their basic availability in case of emergency.

This is the intervention model that should be followed to protect the more than 800 million people who, according to the United States Geological Survey (USGS), live within a perimeter of 100 kilometers around the 1,500 active volcanoes on the planet, a distance that places them within reach of the potentially deadly impact of the approximately 60 eruptions that are recorded on average in the world each year.

The areas with the highest concentration of volcanoes are the famous Pacific Belt of Fire and Indonesia, where there are an estimated 120 active volcanoes. The Fire Belt extends over 40,000 km surrounding the Pacific Ocean, with over 452 volcanoes, some of them the most active in the world. 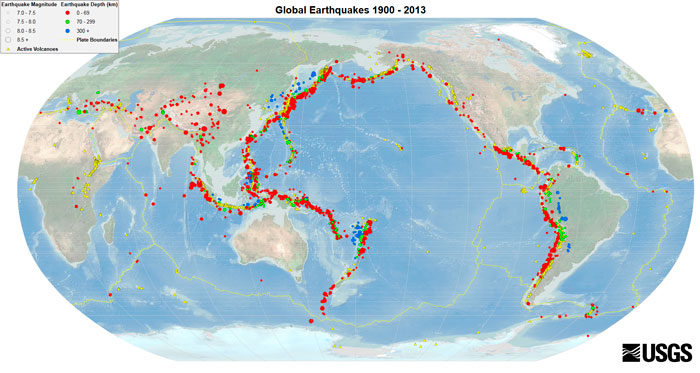 Map of the United States Geological Survey (USGS) that shows how the volcanic activity (yellow triangles) is linked to earthquakes (circles). In the “Pacific Fire Belt”, the formation of mountain ranges, volcanoes and earthquakes is clearly visible due to plate tectonics, the movement and collision of the plates of the Earth’s crust.

Fire and water in a lethal combination

Contrary to popular belief, lava and toxic gases, the most spectacular elements expelled by the crater of a volcano, are those that cause the least direct damage to people and goods: in reality less than 2% of deaths in this kind of disasters are due to these causes. Volcanic mortality is mainly due to pyroclastic flows and lahars. 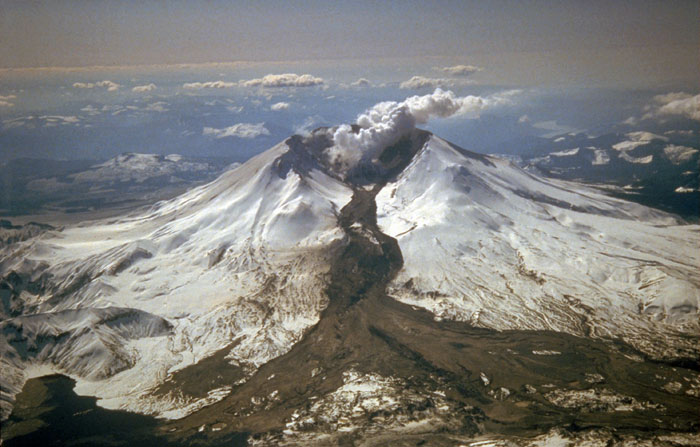 On the 19th March 1982, the eruption of the St. Helens Volcano generated a lahar that reached 80 kilometers following the riverbeds. The photo clearly shows the fusion caused by lava and pyroclastic flows on the snow and ice surrounding the crater. © Tom Casadevall, USGS

The destructive power of pyroclastic flows is enormous as they can advance over obstacles, scorching or burying the area they cross under debris. According to the USGS, pyroclastic flows have been responsible for around 120,000 deaths all around the world in the last 500 years and over 30,000 only in the 20th century.

These fire rains have been one of the icons of Apocalypse in the traditional heritage: mainly since archaeological excavations in the 19th century discovered the holes of human bodies found in tragic defensive postures under layers of ashes in the ruins of Pompeii after the eruption of Vesuvius on 24 August 79 AD. Archaeologists estimate that around 5,000 people died in a few minutes in what is probably the oldest documented eruption.

When these flows combine with water, they increase their speed and range, multiplying the risks in exposed areas as their destructive potential grows. In 1929, Geology coined the new term lahar after the eruption of the Kelut Volcano in Indonesia, referring to the word used by natives to name the mud floods mixed with all kinds of debris dragged by equatorial rains after the eruptions. Since then, the study of lahars has been an essential element in assessing the risks to the population exposed to volcanic eruptions.

Water from the lahar comes from snow or ice at the top of the mountain, from water dammed in the crater, from water tables fractured by the explosion or from intense rains after the eruption. Snow and ice, suddenly melted by the heat of the lava or the pyroclastic flow, or water dammed in the crater and expelled by the explosion, cause water avalanches that can reach 200 kilometers per hour due to the accentuated inclination of the crater cone.

In the case of torrential rain, there is a geological factor that increases uncertainty: the amount of accumulated matter in the cone and the areas adjacent to the crater. This material is essentially made up of ashes and rocks of various sizes, which is generally poorly compacted and settles very unsteadily in the soil, so that it can be easily washed away by water. This creates torrents with very similar dynamics to that of floods in any torrential rain episode.

According to experts from the Institute of Geophysics, National Autonomous University of Mexico (UNAM), lahars have been responsible for at least 15% of the deaths caused by natural disasters between the 17th and 19th century on Earth. During the 20th century the number of deaths due to these events rose to 40% because of two eruptions: that of the Kelud Volcano in Java, Indonesia, in 1911, with 5,000 victims and that of Nevado Ruiz, in Colombia, in 1985, which buried the city of Armero under mud and sediments causing more than 20,000 deaths, which is considered the worst known disaster due to lahars.

The challenges of risk reduction

Reducing the risk caused by volcanic eruptions is one of the major challenges for civil protection in countries with the largest exposed populations. In the equation used to assess risks - Risk = Dangerous phenomenon + Exposure + Vulnerability – volcanoes show significant variations from one area to another.

In spite of the significant advances in volcanology and the constant monitoring, volcanic eruptions still have a degree of long-term uncertainty. Although some eruptions may occur without warning, most volcanoes issue a variety of indications that activate the observation and alert protocols. Volcanologists always try to predict the degree of explosiveness of the eruption, which mainly depends on the amount of gas dissolved in the magma; it is the steam that contributes the most, as it is present in up to 80% of the total volcanic gas.

However, in the case of lahars, the prediction of the phenomenon depends on climatic, meteorological, hydrological and geological factors. The destructive capacity of the lahar depends on the amount of water mixed with the pyroclastic flow and lava, on the mass of ashes and rocks unsteadily settled around the crater they can carry, and on the speed the mud torrent can reach downhill.

The glaciers and snow masses that exist at the top of many volcanoes depend on their geographical location and their height, and are determining factors of the intensity of the lahar, which may be triggered right after the eruption due to the fusion caused by heat. In this sense, paradoxically, climate change, with the notable decrease in snow and ice accumulated in most of the world’s volcanoes, is decreasing the risk of damages due to lahars. This is the case of the Andean volcanoes in South America, such as the feared Nevado Ruiz: in 2015, experts from the National University of Colombia, while studying the risks of lahars, reached the conclusion that between 2023 and 2030, the glaciers of the mountain might disappear. With the decrease in the phenomenon of ice melting, the risk due to the phenomenon mainly depends on rain, and therefore weather forecasts become decisive. The increase of torrential rainfall due to climate change in many tropical areas is a risk factor to be taken into account in the civil protection plans of these countries.

Exposure and vulnerability: the eternal problem of poverty 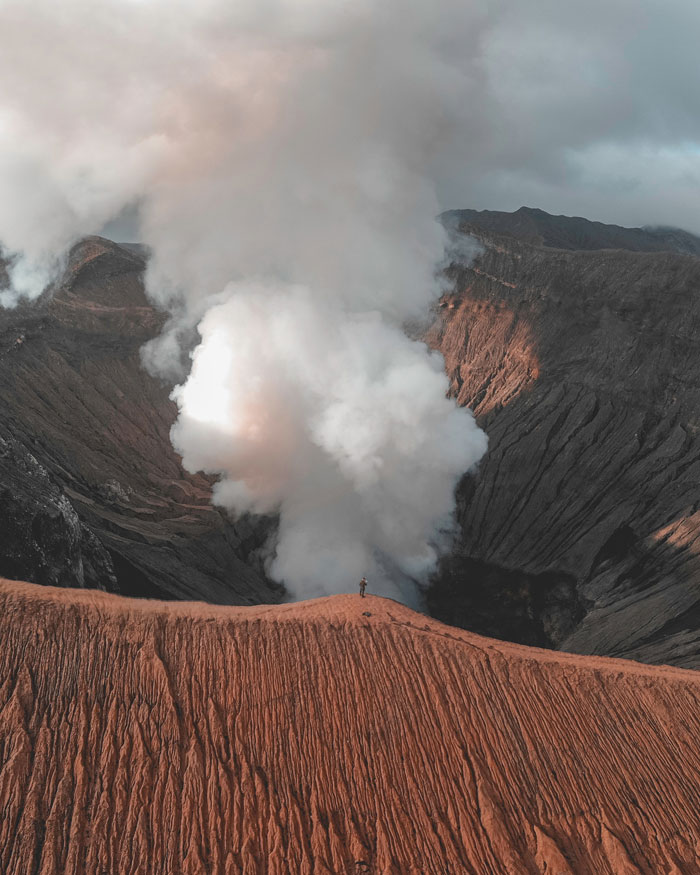 Indonesia and Latin America are the areas where risks are greater mainly due to the difficulty in reducing the exposure and vulnerability levels in many volcanic areas. What happened in the case of the Fuego volcano, in Guatemala, frequently happens in volcanic eruptions, which follow the pattern of other natural disasters, such as  earthquakes and floods: the weakest buildings and the most precarious facilities are found among citizens with the lowest incomes.

In view of the high destructive power of pyroclastic flows and lahars, in order to save people’s lives it is necessary to proceed with the preventive evacuation of the exposed population. In evacuation plans, the initiative that has guided all interventions so far is the program of the International Decade for the Reduction of Natural Disasters, 1990-2000, declared by United Nations after the Nevado Ruiz disaster. Nowadays, the global coordinator is the United Nations Office for Disaster Risk Reduction (UNDRR). A basic part of the program is to foster a culture for the mitigation of natural disasters, since an emergency plan is of little use if it is not known and assumed by those at risk.

As for the reduction of the exposure, for many governments the problem is the source of wealth generated by a volcano around it: its sediments favor a fertile agriculture, they are a tourist attraction, they provide geothermal energy, thermal waters and construction materials. For this reason, many volcanoes, especially those located in disadvantaged areas, are triggers of population growth around them, increasing the exposure of people and goods, and therefore the risk of a catastrophe.

The development of methodologies for the objective estimation of risk, scientific dissemination on a large scale and the implementation of educational programs for the knowledge of the territory and its physical features are key factors to reduce vulnerability and increase post-disaster resilience. 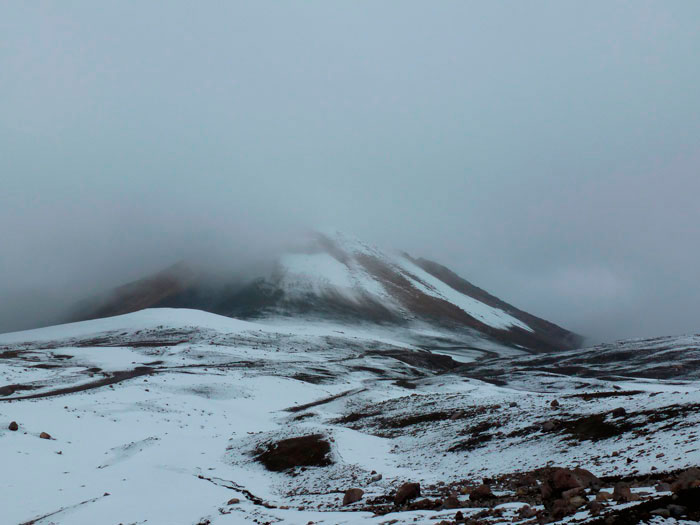