Pristine water, a treasure in the heights of Colombia

We Are Water Foundation
We are a non-profit organisation, set up in 2010 with the aim of contributing to the resolution of problems derived from the lack of water and sanitation in the world.
TwitterFacebookYoutubeWeb
· 19
1

The short film by the Colombian Nicolás Durán, winner in the micro-documentary category of the We Art Water Film Festival 4, is a beautiful tribute to pure water, an immense gift of nature that is increasingly rare to find unless we climb to the top of the mountains. In Colombia and all around the world, it is urgent that we act as the protagonist of the short film, who changed his attitude to be coherent with his thinking.

Climbing to the heights of the Andean foothills in search of pristine water to protect it is what Reynaldo Díaz, the protagonist of the short film by Nicolás Durán, has done on the peaks of the Montaña Mágica (Magic Mountain) “El Poleo”, a natural reserve located in the town of Zapatoca, in the Santander region (Colombia). Reynaldo radically changed his life, showing a hopeful path to preserve the most precious good.

Nicolás Durán, director of the short film, explains to us how the water situation in Colombia and Reynaldo’s example inspired him to shoot the micro-documentary:

The water from the springs that flow from the peak of the Magic Mountain feed the basin of the Magdalena River, which crosses Colombia from south to north, flowing into the Caribbean Sea. But the waters of the country’s main hydrological artery do not resemble those at the peaks that Reynaldo drank with delight. The Magdalena River, over 2,000 kilometers long, accumulates high levels of pollution. 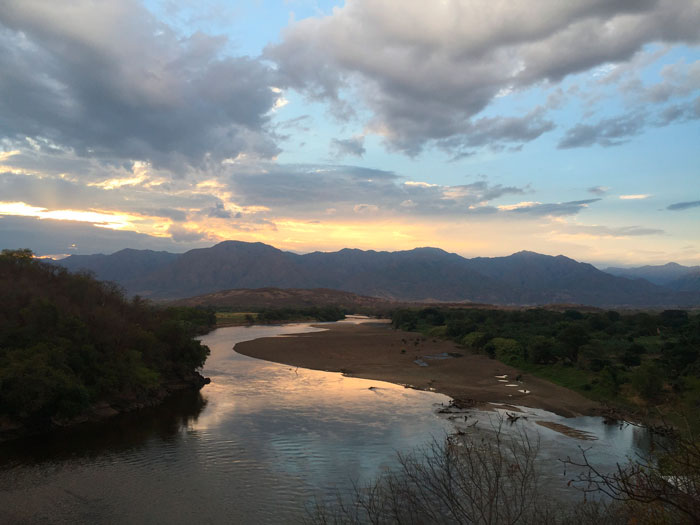 The main cause is the discharge of wastewater from the 128 riverside towns, more than half of which is discharged without being treated at all. 90 % of these towns also dispose of meat industry waste from local slaughterhouses with no waste recycling systems, which rots in the river. Another polluting factor comes from spills of fuels and waste from the hydrocarbon industry, which no authority controls. But the most lethal pollution for the population originates in the mining of alluvial gold, with only 15% of the de-velopments under control, which poison the Magdalena River with mercury and cyanide, especially in areas such as the south of the Bolívar region.

This situation was denounced by the Attorney General’s Office of Colombia in 2013 in a report that pointed out the threat of the river’s pollution for the health of the inhabitants of its basin, as that year 27% of the towns reported damages to their drinking water treatment plants without studies to measure the relationship between water quality and the morbidity of the population.

The pollution of rivers is only a part for the problems of access to water in Colombia, which paradoxically is one of the countries with the highest theoretical availability of water per inhabitant in the world. Each Colombian has nearly 45,000 cubic meters of freshwater each year, which compared to Sweden with 18,300, Spain with 2,400 and India, with only 1,519, gives an idea of the enormous water potential of the Andean country, but the deficiencies in the distribution and management mean that this wealth does not reach the entire population.

Once peace has been signed with the FARC guerrillas, one of the priorities of the Colombian government is to preserve water and provide all citizens with access to it. To do this, it has extended the protection to the moors and basins, improving the supply and sanitation based on the National Policy for Integrated Water Resources Management. So that the pristine water that “tastes like a mother”, which Reynaldo protects, reaches everyone.