Urban agriculture: concrete can be green

We Are Water Foundation
We are a non-profit organisation, set up in 2010 with the aim of contributing to the resolution of problems derived from the lack of water and sanitation in the world.
TwitterFacebookYoutubeWeb
· 71
1

Cities can be much more than just asphalt, bricks and concrete: they can end up supplying most of the food of the future, saving water and being effective elements in the fight against climate change. Urban and peri-urban agriculture is a movement that gains strength as it is a key driver for the transformation and development of cities, and an incentive for the reuse of water.

The farming of fruit and vegetables in cities by using public spaces, rooftop terraces and balconies is an old practice that dates back to the Babylonian civilization and which was widespread in ancient Egypt and the Inca Empire. But urban agriculture, as we know it today, emerged in the United States and in Europe during the two World Wars of last century, when the so called, “war gardens” or “victory gardens” were promoted among citizens to supply themselves against famine and the lack of water supply. They became a key element in the endurance of the civil population and even generated an excess that was sent to the troops at the front. 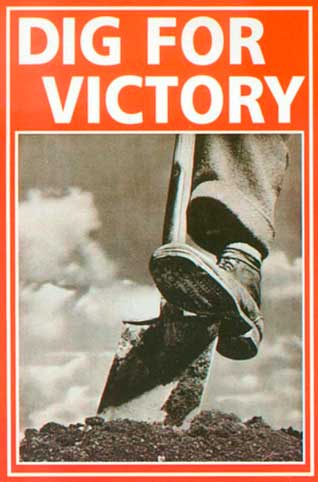 Posters of the campaign “Dig for Victory", created during the Second World War by the British Ministry of Agriculture.

Nowadays most of the large cities around the world have programs called Urban and Peri-Urban Agriculture (UPA), a term coined by the Food and Agriculture Organization of the United Nations (FAO) which promotes their expansion since the eighties. The term “urban” refers to the city and “peri-urban” to the surrounding territories.

Stopping the surface of urban crust

The future of the planet is organized around cities. Those cities, which are home to 3.7 billion inhabitants, nearly half of the world population, will reach 6.5 billion by 2050; that is, over 70% of the population will live in large cities By then there will be 9.1 billion mouths to feed on Earth, and therefore it will be necessary to increase the world agricultural production by two thirds.

Large cities increasingly concentrate the political, economic and technological power, they define the culture and are the barometer of social welfare. Rural areas will increasingly work for cities, as these are large consumers of water, food and energy.

This scenario is a serious cause for concern. The experts gathered in Madrid on June 1st at the forum The future is now, organized by the Norman Foster Foundation discussed the future of the asphalt and concrete crust that already covers 3% of the surface of the planet and which is growing around three or four times more than the increase of its population. This horizontal growth is not sustainable, as proved by Norman Foster when he compared Houston, a model of surface growth, with New York City, which has mainly grown vertically.

Foster proved that the horizontal city contaminates more due to automobile transport, causing more environmental stress as it covers fertile land, contaminating aquifers and rivers and increasing the “heat island” effect due to the asphalt and concrete heating. On the other hand, a surface expansion of buildings implies a higher cost of water distribution and sanitation and increases the water and carbon footprint of consumer products, especially of food, as the areas of agricultural production are farther away from the centers of consumption. 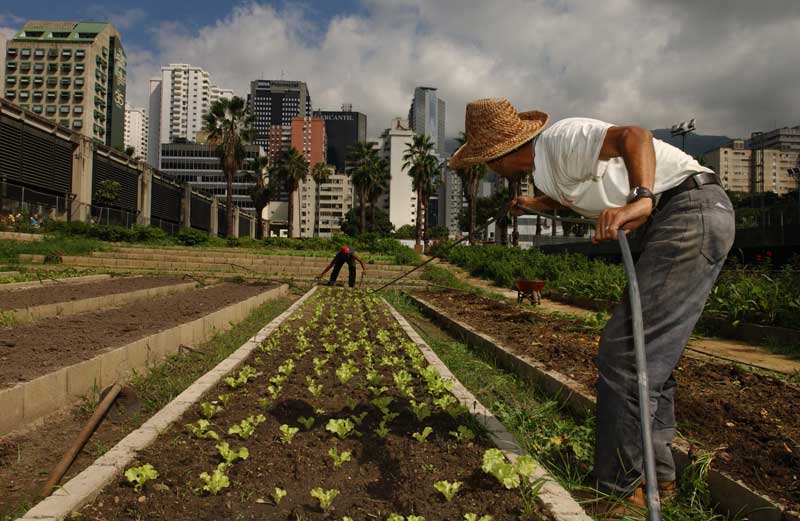 In this context, urban and peri-urban agriculture appears as a socioeconomic factor that might be able to transform the concept of sustainability in cities and fight poverty in those cities in developing countries, which are the ones to present the highest urban growth. According to FAO, the promotion of farming by citizens in their homes or in private plots allows the attainment of food safety goals, unthinkable in a context in which the poor need to buy food at market prices. Moreover, the greatest deficiencies of water and sanitation concentrate in the shacks and urban agriculture allows the reuse of water which otherwise would not be suitable for consumption and the fertilization of crops by recycling organic waste. In this sense, the development of the garden is an incentive to recycle water and to improve the sanitation systems.

FAO does not only include the farming of vegetables in the term urban agriculture, but also aviculture, small-scale stockbreeding, fishing, aquaculture and forestry. Already in 1999, the organization presented a report that showed that urban producers could achieve the necessary efficiency by using underutilized resources, such as abandoned or deteriorated land, waste water and rain water, so that the productivity could be even 15 times higher than the production per acre of rural agriculture. Since then, the experiences that have been carried out confirm the benefits of this practice in many cities in Africa, Asia and Latin America.

Bombay´s experience stands out in India, one of the most densely populated cities in the world, in which the lack of soil and water has given rise to ingenious solutions on balconies and rooftop terraces. The kitchen service at the city´s port, which daily distributes food to approximately 3,000 workers and generates important amounts of organic waste, has created a terrace garden that recycles 90% of this waste for the production of ecological vegetables and fruit that replenish the menu of workers.

In those frequent cases in which the shacks have expanded over fertile land, urban farming is a regeneration element of the soil and therefore essential to recover the aquifers. In these depressed areas, this practice creates jobs and becomes a very powerful element of support and social cohesion, promoting the awareness towards solidarity and developing the knowledge of sustainability and environmental balance.

A powerful element of awareness

The practice of UPA has expanded, although very unevenly, to most cities in the industrialized countries. In these cities, apart from the land with no use, the farming of vegetables has reached balconies and rooftop terraces covering the bricks and concrete of many buildings with a green layer. The city of New York stands out remarkably, as green roofs and farms on rooftop terraces have spread and collection systems of rain water and sewage have been developed with the aid of the Department of Environmental Protection and several promoting associations. Nowadays New York has the largest roof farms in the world. 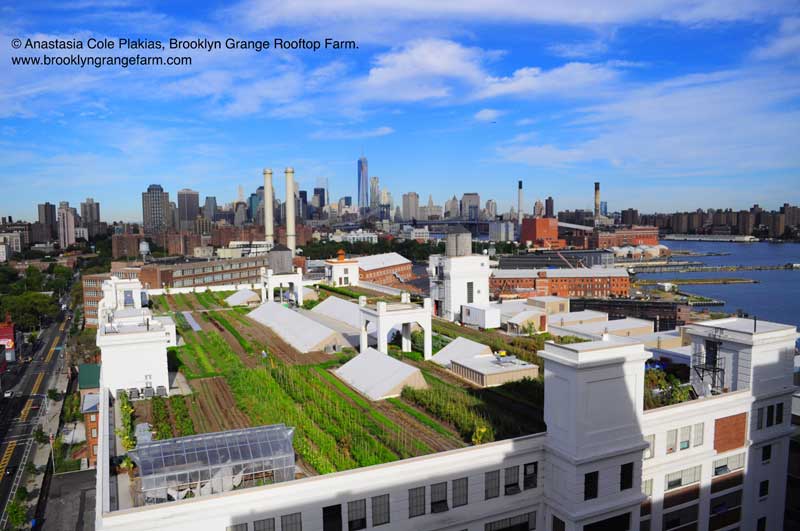 Similar experiences have been developed in cities in California, Canada, China and the United Kingdom. In Spain, the economic crisis that started in 2007 notably promoted urban agriculture. Several communal farms were created in Madrid and Barcelona and nowadays a growing number of initiatives are being developed that include programs in schools with the aim of providing young people with basic agricultural skills. Students apply energy-efficient irrigation systems in a practice in which they come in direct contact with the food chain, acquiring special awareness of the importance of meaningfully implementing each drop of water and avoiding its contamination.

One of the key arguments in favor of urban and peri-urban agriculture is the development of the culture of proximity consumption. In this sense, getting as close as possible to the ideal “km zero” reduces not only the water and energy consumption in food transport, but it also allows the better use of water, either by direct irrigation or even better, by using rain water.

Green architecture gets to cities 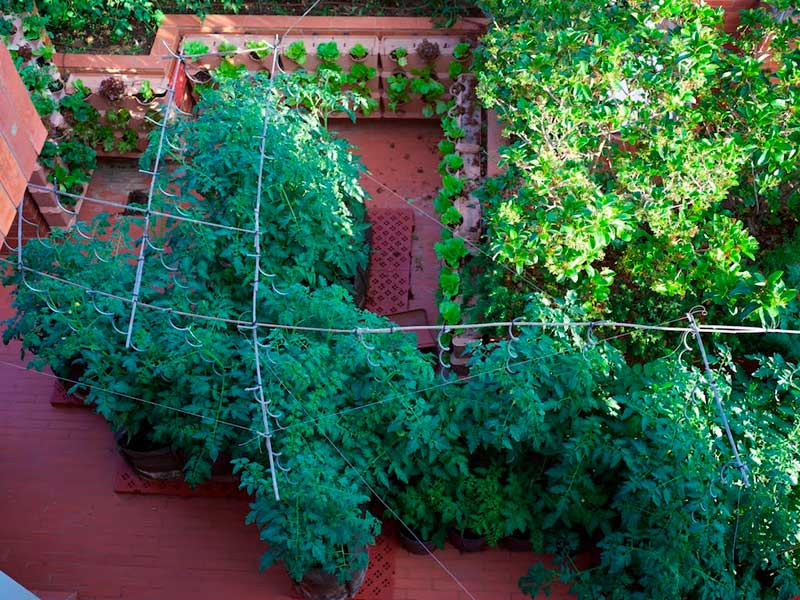 On a global level, urban and peri-urban agriculture is also an element to fight the “heat island” effect, which is caused by the heat radiated by cars and air conditioning and by the mass of pavement, bricks and concrete when heated by the sun. This increase in the environmental temperature is directly proportional to the size of the urban stain. A study published in the magazine Nature Climate Change and based on the analysis of 1,692 cities shows that this phenomenon doubles the urban cost of climate change. The overheating of cities uses more energy and water to cool the interior of homes, of drinks and food, while contaminating the air, affecting the quality of water and decreasing the productivity of workers. The study states that if 20% of the roofs of a city and half of its pavement were covered by vegetables, a fairly realistic goal, it would be possible to save up to 12 times the cost of reducing the temperature of the air by 0.8 degrees.

This “green layer” is not a utopia and there are already architectural designs of buildings covered with plants that are irrigated with recycled water, also using hydroponic techniques (farming without land) governed by smart systems. Nicholas Negroponte, founder of the renowned MIT Media Lab, assured at the Madrid forum that the cities of the future "will be planted like seeds and will grow biologically.” We are still far from this scenario which points at an uncertain and controversial control of urban planning by technology. For the moment, the modest urban garden makes its way as a sustainable option in face of the disproportionate and until now, less technological growth of cities.