We Are Water Foundation
We are a non-profit organisation, set up in 2010 with the aim of contributing to the resolution of problems derived from the lack of water and sanitation in the world.
TwitterFacebookYoutubeWeb
· 19
1

In the outlying slums of the capital of Sierra Leone, the population constantly increases in shacks without water or sanitation. Children bear the brunt: they miss school hours fetching water that often makes them sick. This is the reality of Kadija A. Bangura, shown in the micro-documentary Far Away, one of the finalists of the We Art Water Film Festival 4.

Far Away by Robino (Sierra Leone), finalist of the We Art Water Film Festival 4. Micro-documentary category.

Most of the world heard about the hills that surround Freetown, the capital of Sierra Leone, on the 14th August 2017, when after three days of torrential rains, flooding and landslides took the lives of more than 500 people, leaving over 3,000 homeless. The lack of infrastructures and adequate drainage systems aggravated the consequences of the floods, which had already had a precedent in 2015, when another wave of rains left thousands of people homeless and dozens dead in the capital.

Climatologists cited both disasters as examples of the consequences of climate change in sub-Saharan Africa, where increasingly violent meteorological phenomena are expected in the future. Land degradation is an aggravating factor as it facilitates landslides. The area, in spite of being declared forest reserve in 2010 after the devastating civil war, has experienced continuous deforestation mainly due to uncontrolled logging and the expansion of slums such as the one where Kadija, the protagonist of the short film, lives.

In her neighborhood, around 25,000 people survive in poverty. It is one of those surrounding the capital which has already reached one million inhabitants. Floods and avalanches have damaged the already precarious supply and sanitation facilities, contaminating the water in many wells and sources. 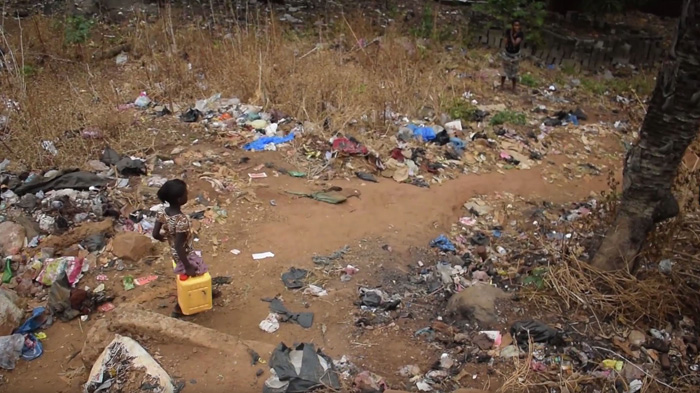 In the early hours of the morning, Kadija has to fetch water by walking through a rubbish dump to the well where other women gather to do the washing. After carrying the water drum on her head, she needs to walk up to her house and try to get to school on time, which she often fails to do. At the age of seven, Kadija suffers from cervical pains and has symptoms of diarrhea. WHO and UNICEF statistics show that she has a life expectancy of 40 years and that more than half of her classmates will drop out of school by adolescence due to early pregnancies or poor results due to absenteeism caused by having to fetch water in addition to other tasks inherent to poverty.

This situation extends to sub-Saharan Africa, where governments are powerless to stop the migrations caused by rural impoverishment in an area particularly threatened by climate change. The case of Sierra Leone shows the paradox of a country that, with over 26.000 m3 of water per inhabitant and year, is among the countries with the largest water resources in the world but is unable to provide access to water for all its inhabitants. Kadija represents the injustice denounced by the campaign #NoWalking4Water driven by the Foundation: the world cannot tolerate this scourge. Like all poor areas of the world, Africa faces an enormous challenge that we must all help with; being aware of this is the first step.