When there is no power without water

Water shortages in many Venezuelan cities are worsened by power cuts and the deterioration of public services, especially affecting the poorest neighborhoods. Most of their inhabitants fight every day to obtain water outside the cities with the serious risks it entails. Others have been implementing a water survival strategy for decades. This is featured in the short film La camisa sucia (The stained shirt), finalist of the We Art Water Film Festival 3.

La camisa sucia (The stained shirt), short film by Ocasill (Venezuela), finalist of the We Art Water Film Festival 3 in the Micro-fiction category.

Resilience implies psychological strength. The lack of certainty in the water supply is usually linked to other economic and social shortages that compel the population to struggle to move forward, a stress that forces them to store, to plan, to calculate and to dose. Children like Lucía, the leading character in the short film, used to these shortages, mature quickly and have problems that seem unthinkable to children who have never experienced the lack of water: arriving home with stained clothes implies having to do the laundry again and this is a luxury the family cannot afford.

Lucía lives in a coastal city in Venezuela, a country in which many of its most important cities, like Caracas and Maracaibo, are currently experiencing severe water shortages. Historically their inhabitants have suffered the uncertainty of water security, now aggravated by the climate crisis, the deterioration of power systems and the lack of efficient governance.

In the case of Caracas, in the first two decades of Venezuelan democracy (1960 and 1970), the Government built new water systems, while the population grew. It expanded, urbanizing the hills of the valley, mostly with poor neighborhoods and insufficient infrastructures.  After building the Taguaza reservoir in 1998, Caracas’ water supply exceeded 20,000 liters per second. But since then, the deterioration of the network due to the lack of maintenance has led to a supply of only 14,000 liters. 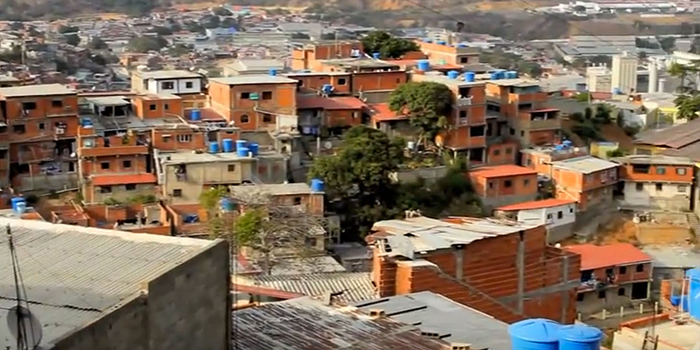 In the large capital cities, power cuts have created an additional problem with the shutdown of sewage and water treatment plants. In Caracas, the lack of electricity makes it impossible for the pumping stations that bring water from the reservoirs located in the lowest part of the city to work. Poor management, another endemic problem of the water system in Caracas, was the reason why, when the famous blackouts of March 2019 occurred, all the reservoirs located at higher elevations (which send water by gravity) were practically empty.

At the beginning of this summer, the water crisis forced many people to get water from the Guaire River, which flows through the city and whose riverbed collects most of the untreated waste. Despite warnings from health officials, who alert it is not enough to boil water to eliminate its toxicity, hundreds of people go to the river to get water every time the supply stops. The situation aggravates in hospitals where basic services are not available and certain surgeries need to be postponed due to the lack of water supply.

The situation currently existing in the capital of Venezuela is similar to the water crisis in 1958, as there are shortage periods similar to the ones narrated by the writer Gabriel García Márquez, in his famous column Caracas sin agua (Caracas without water). The Nobel Prize for Literature (1982) wrote a masterful column of the crisis unleashed in June 1958 in Caracas, when the water supply system was paralyzed after a severe drought and an intense heat wave. At that time, the La Mariposa reservoir was the main water reserve of the capital and it was practically empty. This column, considered by many one of the first examples of New Journalism, describes in the surrealistic tone often employed by the writer, the hardships experienced in the capital and ends with a paragraph whose message is still very valid: “[Samuel Burkart, the fictional main character of the column] awoke startled. In every floor of the building he felt a human crowd rushing down the street. A burst of warm, pure water, penetrated through his window. He needed a few seconds to realize what was happening: it was raining.” Let the joy of rain not take away the memory of drought, not in Caracas or anywhere in the world.