COVID-19 did not slow the relentless advance of climate change. There is no sign that we are growing back greener, as carbon dioxide emissions are rapidly recovering after a temporary blip due to the economic slowdown and are nowhere close to reduction targets. Greenhouse gas concentrations in the atmosphere continue at record levels, committing the planet to dangerous future warming, according to a new multi-agency United in Science 2021 report.

Rising global temperatures are fuelling devastating extreme weather throughout the world, with spiralling impacts on economies and societies. Billions of work hours have been lost through heat alone. The average global temperature for the past five years was among the highest on record. There is an increasing likelihood that temperatures will temporarily breach the threshold of 1.5° Celsius above the pre-industrial era, in the next five years, the report said.

The scale of recent changes across the climate system as a whole are unprecedented over many centuries to many thousands of years. Even with ambitious action to slow greenhouse gas emissions, sea levels will continue to rise and threaten low-lying islands and coastal populations throughout the world, according to the report.

“This is a critical year for climate action.  This report by the United Nations and global scientific partner organizations provides a holistic assessment of the most recent climate science.  The result is an alarming appraisal of just how far off course we are,” said UN Secretary-General Antonio Guterres. 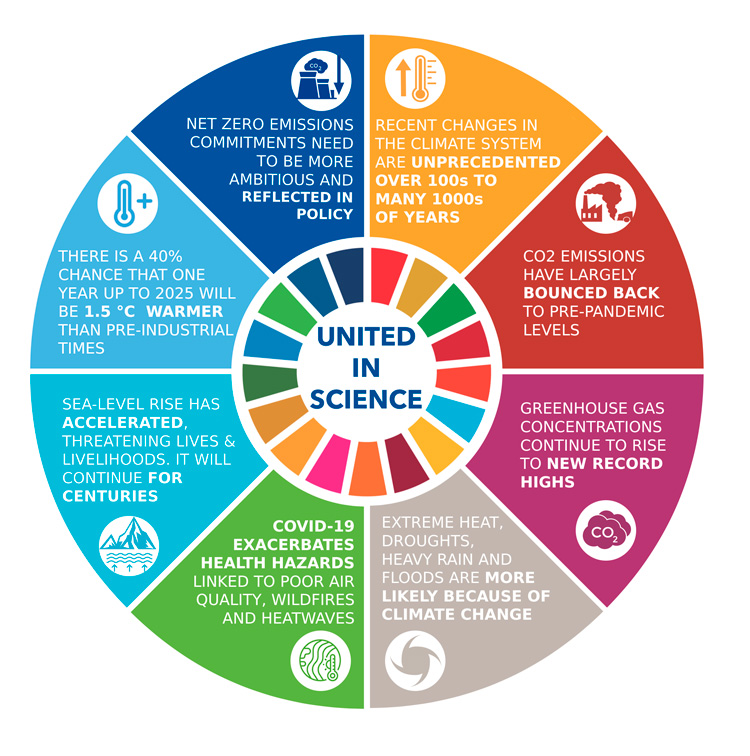 “We are still significantly off-schedule to meet the goals of the Paris Agreement.  This year has seen fossil fuel emissions bounce back, greenhouse gas concentrations continuing to rise and severe human-enhanced weather events that have affected health, lives and livelihoods on every continent.  Unless there are immediate, rapid and large-scale reductions in greenhouse gas emissions, limiting warming to 1.5°C will be impossible, with catastrophic consequences for people and the planet on which we depend,” he said in the foreword.

Mr Guterres also delivered a video message for the release of the report at a press conference given by WMO Secretary-General Prof. Petteri Taalas.

The United in Science 2021 report, the third in a series, is coordinated by the World Meteorological Organization (WMO), with input from the UN Environment Programme (UNEP), the World Health Organization (WHO), the Intergovernmental Panel on Climate Change (IPCC), the Global Carbon Project (GCP), the World Climate Research Programme (WCRP) and the Met Office (UK). It presents the very latest scientific data and findings related to climate change to inform global policy and action. It is accompanied by a Story Map.

“Throughout the pandemic we have heard that we must build back better to set humanity on a more sustainable path and to avoid the worst impacts of climate change on society and economies. This report shows that so far in 2021 we are not going in the right direction,” said Prof. Taalas.

“This report is clear.  Time is running out.  For the 2021 United Nations Climate Change Conference in Glasgow, known as COP26, to be a turning point, we need all countries to commit to net zero emissions by 2050, backed up by concrete long-term strategies, and enhanced Nationally Determined Contributions which collectively cut global emissions by 45 per cent by 2030, compared to 2010 levels,” said Mr Guterres.

“We need a breakthrough on protecting people and their livelihoods, with at least half of all public climate finance committed to building resilience and helping people adapt.  And we need much greater solidarity, including full delivery of the long-standing climate finance pledge to help developing countries take climate action.  There is no alternative if we are to achieve a safer, more sustainable and prosperous future for all.”