An estimated 23,000 lives per year could be saved potential annual benefits of at least US$ 162 billion could be realized by improving weather forecasts, early warning systems, and climate information – known as hydromet, according to a new report.

The first Hydromet Gap Report, launched on 8 July, tells us how far we have to go to tap the benefits of effective weather and climate services. It presents the challenges of the complex global and local undertaking required and proposes priority actions to scale up support to developing countries to strengthen their capacity.

The report is presented by leaders of the Alliance for Hydromet Development, which brings together the World Meteorological Organization (WMO) and international development, humanitarian and financial institutions, at a high-level event on the hydromet solutions needed for effective climate action and sustainable development.

It highlights how investments in multi-hazard early warning systems create benefits worth at least ten times their costs and are vital to build resilience to extreme weather. And yet, only 40 percent of countries currently have effective warning systems in place, and large gaps remain in the vital underpinning observations data upon which these services depend, particularly in Least Developed Countries and Small Island Developing States.

“Our climate is rapidly changing. The past decade was the hottest on record. Global mean temperature is approximately 1.2 °C warmer than pre-industrial times. We are far off track from reducing global greenhouse gas emissions to avert the worst impacts of climate change and limit temperature rise to within 1.5 °C in line with the Paris Agreement,” says WMO Secretary-General Prof. Petteri Taalas.

While reducing greenhouse gas emissions remains essential, United Nations Secretary-General António Guterres has called for a breakthrough on adaptation and resilience in 2021, with significant increases in the volume and predictability of adaptation finance. Such a breakthrough is vital to ensure all people, especially the most vulnerable, can adapt and be more resilient to the consequences of inevitable future weather and climate events.

“Science-based, data-driven weather and climate services are the foundation for effective adaptation measures,” says Prof. Taalas in a foreword to the report.

“While the contribution of developing countries to greenhouse gas emissions is limited, the impacts of disasters from climate related weather events are three times higher than in high income countries. Accurate weather forecasts and robust climate prediction is critical for adaptation policy and investment decisions,” comments Alassane Ouattara, President of Côte d’Ivoire.

The Alliance for Hydromet Development was launched at the U.N. Climate Change Conference, COP25, in Madrid. The Alliance members collectively committed to unite and scale up efforts to close the capacity gap on high-quality weather, climate, hydrological, and related environmental services as the foundation for resilient and sustainable development.

They create a triple dividend that includes:

The report presents the Country Hydromet Diagnostics, a standardized and integrated, operational tool of the Alliance for assessing hydromet services and guiding investment decision-making.

In partnership with 16 countries a first round of the Country Hydromet Diagnostics was undertaken. Assessments were undertaken by peer meteorological services. It revealed wide capacity gaps among the assessed countries. The weakest countries lacked the most basic capacity in terms of equipment, skills and user engagement, despite the clear and growing risks. 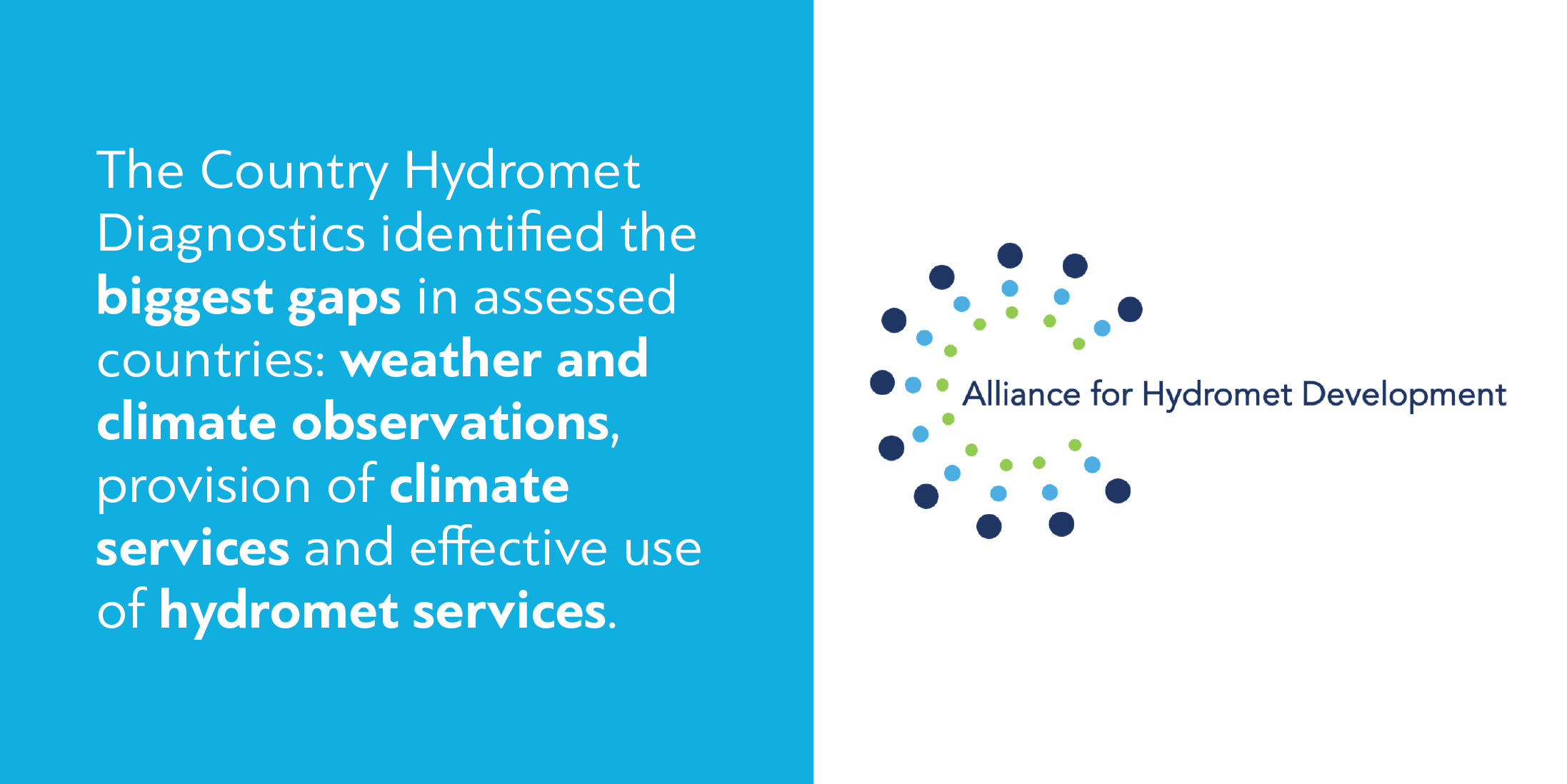 The observations gap is particularly severe in Least Developed Countries and Small Island Developing States, which are currently far from meeting the requirements of the internationally agreed Global Basic Observing Network. This makes it impossible to provide high-quality forecasts in these countries.

The lack of observations from these countries impacts the quality of forecasts across the entire globe. Without a substantial increase of internationally exchanged surface-based observations, the quality of hydromet services cannot be significantly improved. These services can only be as good as the data they are built upon.

Therefore, the Hydromet Gap Report states the creation of the Systematic Observations Financing Facility (SOFF) as a priority action of the Alliance. Creation of the Alliance is backed by many leaders from beneficiary countries and international organizations. It aims to strengthen climate adaptation and resilient development through the sustained collection and international exchange of high-quality surface-based weather and climate observations.

As a global initiative, the facility is expected to provide long-term financial and technical support to close the observations gap in a sustained manner, in particular in Least Developed Countries and Small Island Developing States.

The aim is to launch SOFF at the U.N. Climate Change Conference in Glasgow, COP26, and for it to be operational in 2022.

The Hydromet Alliance aims to increase effectiveness and sustainability of hydromet investments through collective action. The members of the Alliance act within their respective resources and mandates and forge a collaborative partnership which recognizes and leverages respective competencies and expertise.

The report was launched at a High-Level Political Forum special event co-hosted by the Alliance for Hydromet Development and the United Nations Department of Economic and Social Affairs. 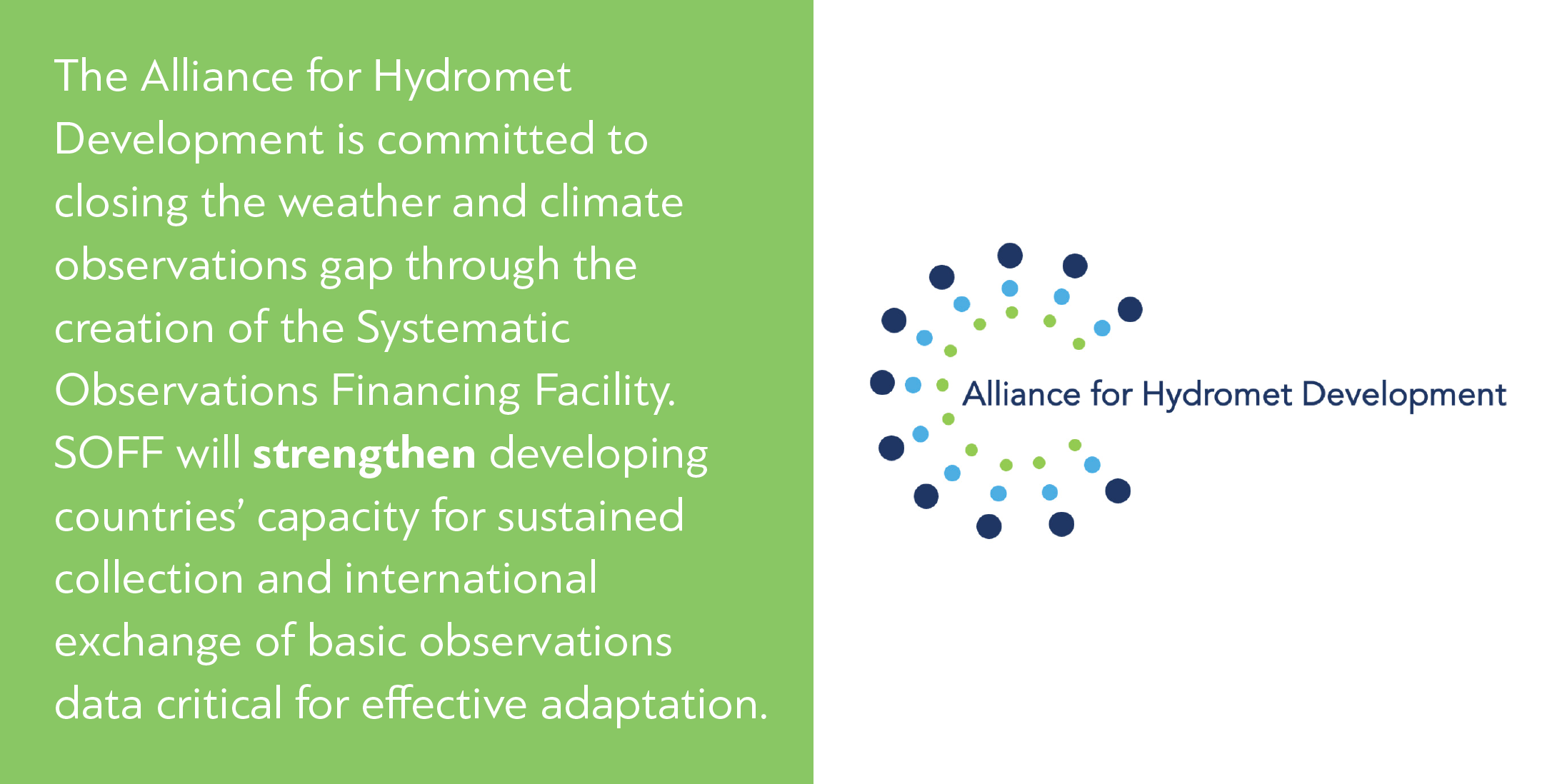 Why we need to close the gap

“Providing Hydromet assistance to developing countries is key for scaling up and uniting efforts to achieve the common goal of closing the capacity gap on weather, climate, hydrological, disaster risk management, and related environmental services by 2030, and is critical to enable funders such as the Adaptation Fund to help the most vulnerable communities adapt and build resilience to climate change.” Mikko Ollikainen, Head of the Adaptation Fund

“The Alliance partnership is important to the Bank and to Africa. It offers a platform to strengthen resilient development and climate adaptation through improved ground-based observing systems, leading to better weather forecasts of extreme events and climate prediction services,” Akinwumi A. Adesina, African Development Bank President

“In our region, we have significant gaps in weather observations, especially in our Least Developed Countries and Small Island Developing States, and that’s hampering the ability to respond and adapt to extreme weather events.” Bruno Carrasco, Asian Development Bank Director-General

“Extreme weather and climate events are now increasing in frequency, intensity and severity as a result of climate change. Vulnerable communities are among the hardest hit. The Alliance for Hydromet Development is supporting countries to generate and leverage climate and weather information,” Achim Steiner, United Nations Development Programme Administrator

“The lack of sound climate information services impact people from developing countries the most. Only by taking the pulse of our entire planet delivers the accuracy to predict the risks and future impacts climate change may bring.” Mafalda Duarte, Climate Investment Funds Chief Executive Officer

“It’s critical that we strengthen local and global resilience and capacity to prepare and adapt. A big part of that success will depend on our ability to predict and protect. Therefore, better weather forecasts, early warnings and climate information are essential.” Inger Andersen, United Nations Environment Programme Executive Director

“The weather observation systems in many vulnerable countries are not being adequately maintained and are falling into disrepair. As EBRD recognises the need to help such countries build weather observation and climate forecasting capabilities, the Bank has joined the Alliance for Hydromet Development and fully supports the creation of the Systematic Observations Financing Facility.” Harry Boyd-Carpenter, Managing Director European Bank for Reconstruction and Development

“Weather and climate observations are essential to realize the full benefits of investments in weather forecasts, early warnings and climate information. There are triple benefits of avoided losses through reliable and accurate early warning systems; optimized production processes through the application of robust weather forecasts in highly weather-sensitive sectors; and social and environmental benefits related to increased capital investments and fiscal stability.” Mari Pangestu, World Bank Managing Director of Development Policy and Partnerships

“We need to scale up and support long term global cooperation and partnership to strengthen the climate resilience of the world’s most vulnerable people and communities.This is a major priority for the GEF and the climate adaptation funds we manage, and we look forward to continuing to work with the Alliance for Hydromet Development to prioritize upgrades where they are most urgently needed.” Carlos Manuel Rodriguez, Global Environment Facility Chief Executive Officer and Chairperson

“Countries need greater ability to forecast and predict this climate crisis, so they can protect lives. One of the many different factors driving global hunger today, climate extremes, are one of the most predictable. So let’s work together to help vulnerable communities be better prepared for them.” David Beasley, World Food Programme Executive Director 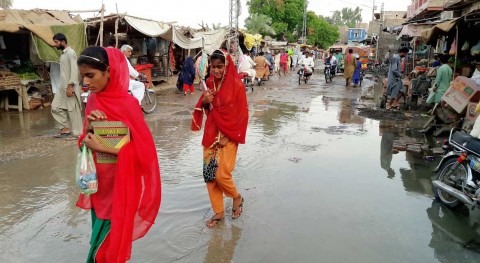