Climate change and extreme weather are threatening human health and safety, food, water and energy security and the environment in Latin America and the Caribbean. The impacts span the entire region, including Andean peaks, mighty river basins and low-lying islands, according to a new report from the World Meteorological Organization (WMO). It flags concerns about fires and the loss of forests which are a vital carbon sink.

The "State of the Climate in Latin America and the Caribbean 2020" provides a snapshot of the effects of increasing temperatures, changing precipitation patterns, storms and retreating glaciers. It includes transboundary analyses, such as of the drought of the South American Pantanal and the intense hurricane season in Central America-Caribbean. It provides a detailed regional breakdown of worsening global climate change indicators.

The report and an accompanying story map show how marine life, coastal ecosystems and the human communities that depend on them, particularly in Small Island Developing States, are facing increasing threats from ocean acidification and heat and rising sea levels.

Climate change and extreme weather are threatening human health and safety, food, water and energy security and the environment in Latin America and the Caribbean

It follows the release of the Intergovernmental Panel on Climate Change report on Climate Change 2021: the Physical Science basis, which said that temperatures in the region have increased more than the global average and are likely to continue to do so. It also projected changing precipitation patterns, more sea level rise, coastal flooding and marine heatwaves.

“Latin America and the Caribbean (LAC) is among the regions most challenged by extreme hydro- meteorological events. This was highlighted in 2020 by the death and devastation from Hurricane Eta and Iota in Guatemala, Honduras, Nicaragua and Costa Rica, and the intense drought and unusual fire season in the Pantanal region of Brazil, Bolivia, Paraguay, and Argentina. Notable impacts included water and energy-related shortages, agricultural losses, displacement and compromised health and safety, all compounding challenges from the COVID-19 pandemic,” said WMO Secretary-General Prof. Petteri Taalas.

“With almost half of its area covered by forests, Latin America and the Caribbean represents about 57 percent of the world’s remaining primary forests, storing an estimated 104 gigatons of carbon. Fires and deforestation are now threatening one of the world’s largest carbon sinks, with far-reaching and long-lasting repercussions,” he said.

Between 1998 and 2020, climate-related and geophysical events resulted in the loss of 312,000 lives and directly affected more than 277 million people.

“As the report makes clear, climate change is impacting livelihoods in the LAC region and increasing disaster risk. The comprehensive climate and risk management approach, promoted by UNDRR, supports governments and communities in reducing, averting and minimizing both current and future climate risks. Accurate and accessible information is crucial for risk-informed decision-making, and the “State of the Climate in Latin America and the Caribbean” is a vital tool in our battle for a safer, more resilient world,” said Ms Mami Mizutori, Special Representative of the Secretary-General for Disaster Risk Reduction and Head of UNDRR.

The multi-agency report is based on a standard methodology for assessing the physical aspects of the climate system. It incorporates input from National Meteorological and Hydrological Services (NMHs), WMO Regional Climate Centers (RCCs), research institutions, and international and regional organizations.  It provides science-based information to support countries and communities in their efforts to adapt to a changing climate and build more resilience to extreme weather. It identifies areas for improvement in the management of hydrometeorological risks. 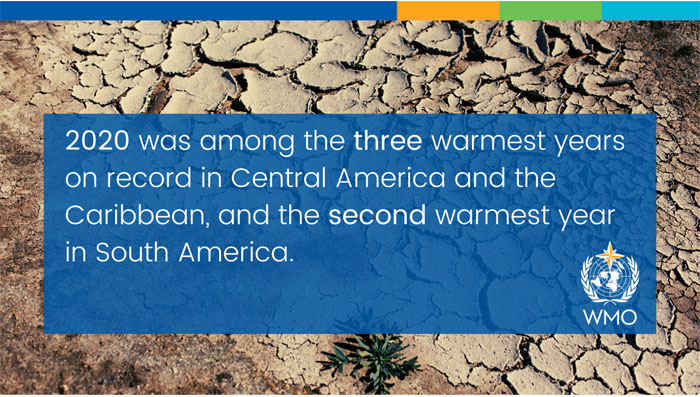 2020 was among the three warmest years in Central America and the Caribbean, and the second warmest year in South America, with, 1.0°C, 0.8°C and 0.6°C above the long-term average of 1981-2010 climatological reference period, respectively.

Widespread drought across Latin America and the Caribbean had significant impacts, including lowering rivers level, thus hampering inland shipping routes, reduced crop yields and food production, leading to worsening food insecurity in many areas. Precipitation deficits are particularly serious for the Caribbean region, as several of its territories are on the global list of top water-stressed countries.

The intense drought in the southern Amazonia and the Pantanal region was the worst in the last 50 years.

Towards the end of the year intense rainfall events brought landslides, floods and flash floods to rural and urban areas in Central and South America.

Fires and loss of ecosystems

The Latin America and Caribbean region contains approximately 57% of the world’s remaining primary forests -- storing an estimated 104 gigatons of carbon, and hosting 40-50% of the world’s biodiversity and one third of all plant species.

Forest loss is a major problem and an important contributor to climate change due to carbon dioxide release. Between 2000 and 2016, nearly 55 million hectares of forest was lost, about 5.5% of the region’s total and constituting more than 91% of forest losses worldwide. However, the rate of net loss has halved in the past decade (FAO and UNEP, 2020).

Overall, wildfires in South America occurred more frequently in 2020 compared to 2019, which was already a critical year in terms of fire activity. The increased rate of wildfires in 2020 caused irreversible damages to ecosystems, including adverse impacts to vital ecosystem services and livelihoods dependent on them.

The Amazon River basin, which stretches across nine countries in South America and stores 10% of global carbon, has experienced heightened deforestation in the last four years due to clearing for cattle pasture and degradation from fires. 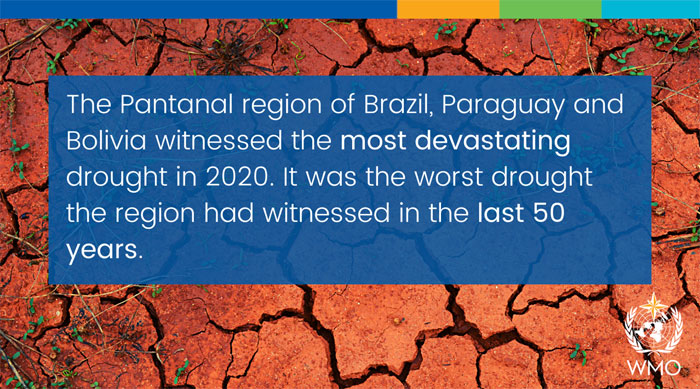 2020 surpassed 2019 to become the most active fire year in the southern Amazon, with drought being a major contributory factor. The year 2020 was the most catastrophic fire season over Pantanal, burned area exceeded 26% of the region, according to the ALARMES warning system  from the Laboratory for Environmental Satellite Applications (LASA-UFRJ). This amount was four times larger than the long-term average observed between 2001 and 2019.

While it is still a net carbon sink, the Amazon teeters on the edge of becoming a net source if forest loss continues at current rates. This was highlighted in a recent study.

In 2020, a record-breaking 30 named storms were detected in the Atlantic basin.

In November, when the Atlantic hurricane season is normally winding down, Category 4 hurricanes Eta and Iota made landfall in the same region within a short space of time. They followed identical paths across Nicaragua and Honduras, affecting the same areas and thus exacerbating the impacts. These unprecedented hurricanes affected over 8 million people in Central America.

Guatemala, Honduras and Nicaragua were the worst-hit countries, with damages to 964,000 hectares of crops and disruptions to agricultural livelihoods.

In Latin America and the Caribbean more than 27% of the population live in coastal areas, with an estimated 6–8% living in areas that are at high or very high risk of being affected by coastal hazards. Low lying Caribbean states are especially vulnerable.

It is estimated that 6–8% of the population live in areas that are at high or very high risk of being affected by coastal hazards. The number of people living below the hundred-year extreme sea level events (ESL) is projected to increase.

Averaging 3.6 mm per year, between 1993-2020, sea level in the Caribbean has been rising at a slightly higher rate than the global average (3.3mm/year).

Sea surface temperature in the Tropical North Atlantic Ocean was significantly warmer than normal throughout the year.

From May 2020, sea surface temperatures started to gradually cool in the equatorial Pacific and La Niña developed.

Together with a warmer Atlantic Warm Pool, this contributed to a more active than normal hurricane season.

The highest acidification  in the world are found in the Eastern Tropical Pacific, that covers the Pacific Ocean side of Mexico and Central America up to the coastal areas of Ecuador. The Mesoamerican Barrier Reef (MABR) is the second largest barrier reef of the world. The impacts of ocean acidification on coral reefs and the potential detrimental consequences for marine life and dependent human communities in the LAC region are particularly acute in the Caribbean.

In the Chilean and Argentinian Andes, glaciers have been retreating during the last decades, ice mass loss has been accelerated since 2010, in line with an increase in seasonal and annual temperatures and a significant reduction in annual precipitation in the region. 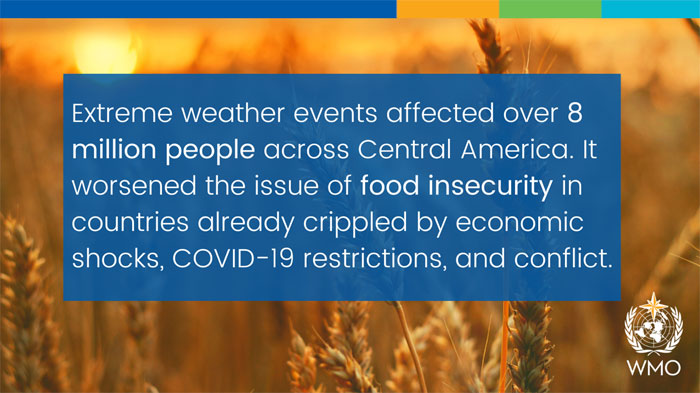 Haiti stood among the 10 worst countries in the world experiencing food crises, with 4.1 million people facing food crises or worse and 1.2 million facing emergency or worse levels in 2020.

Hazard-specific monitoring systems such as FAO's Agricultural Stress Index System (ASIS) is an example of a useful tool to allow governments to issue early warning alerts for specific sectors like the agriculture.

Mangroves are an exceptional resource for adaptation and mitigation. This ecosystem presents the capacity to store three to four times more carbon than most of the forests on the planet, and provides other services like shore stabilization, biodiversity conservation, disaster mitigation among many others.

The conservation and restoration of existing blue carbon ecosystems such as mangroves, seagrass beds, and salt marshes is therefore an important opportunity to mitigate and adapt to global warming.