A landmark new report by hundreds of the world’s top climate scientists is a clarion call for immediate action to slash greenhouse gases in the face of unprecedented and accelerating climate change, the World Meteorological Organization (WMO) said today.

The Intergovernmental Panel on Climate Change (IPCC) Working Group I report, Climate Change 2021: the Physical Science Basis, provides the clearest and most comprehensive assessment to date of warming of the atmosphere, oceans and land.

The scale of recent changes is unprecedented in thousands, if not hundreds of thousands of years. Many changes due to past and future greenhouse gas emissions are irreversible for centuries to millennia, especially changes in the ocean, ice sheets and global sea level, says the report.

It says that human-induced climate change is already affecting many weather and climate extremes in every region across the globe. Evidence of observed changes in extremes such as heatwaves, heavy precipitation, droughts, and the proportion of intense tropical cyclones, and, in particular, their attribution to human influence, has strengthened since the last IPCC Assessment Report in 2014.

United Nations Secretary-General Antonio Guterres described it as "a code red for humanity."

“The harsh reality of climate change is playing out in real time before our very eyes,” said WMO Secretary-General Prof. Petteri Taalas. “It is a foretaste of what faces future generations. Some of the negative changes are already locked into the climate system but others still can be addressed if we make strong, rapid and sustained reductions in emissions now. However, greenhouse gas concentrations, especially carbon dioxide, remain at record levels,” said Prof. Taalas.

“As co-founder of the IPCC, WMO pays tribute to the remarkable achievement of the scientists involved for their dedication and tireless work. We are united in our science. Science has spoken. Now it’s time to act,” said Prof. Taalas.

WMO and the UN Environment Programme established the IPCC in 1988.

The IPCC report projects that in the coming decades climate changes will increase in all regions. For 1.5°C of global warming, there will be increasing heat waves, longer warm seasons and shorter cold seasons as well as changes in precipitation patterns affecting flooding and drought occurrences. At 2°C of global warming, heat extremes would more often reach critical tolerance thresholds for agriculture and health, the report shows.

“The extreme heat we have witnessed in 2021 bears all the hallmarks of human-induced climate change. British Columbia in Canada recorded an incredible temperature of 49.6°C – breaking all previous records - as part of an intense and extensive heatwave in North America. 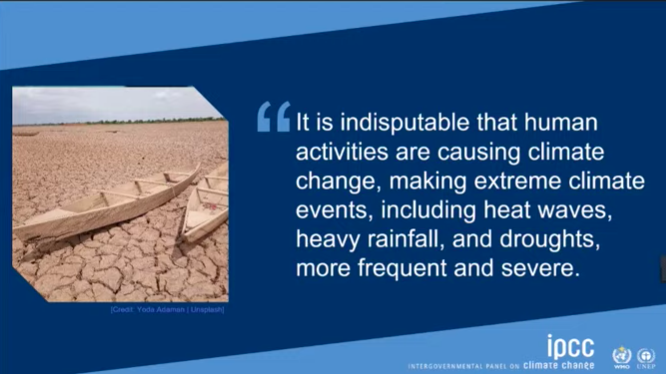 “Fires in North America stoked by heat and drought have sent plumes of smoke across the Atlantic. In recent days, we have seen devastating fires in Turkey and Greece amid an intense and long-lasting heatwave in the Mediterranean. Siberia – a region traditionally associated with permafrost - has once again seen huge wildfires after exceptional heatwaves, fires and low Arctic sea ice in 2020,” said Prof. Taalas.

The Arctic is heating more than twice as fast as the global average. Further warming will amplify permafrost thawing, and the loss of seasonal snow cover, melting of glaciers and ice sheets, and loss of summer Arctic sea ice, according to the report.

The IPCC report shows how climate change is intensifying the water cycle. This brings more intense rainfall and associated flooding, as well as more intense drought in many regions.

“Many countries this year are bearing witness to this. For example, in the month of July alone, up to two months worth of rainfall fell in two days  in Germany, whilst parts of the central Chinese province of Henan received more accumulated rainfall in the space of four days than the annual average. This resulted in hundreds of casualties and many millions of dollars in economic losses,” said Prof. Taalas.

The report shows that the observed average rate of heating accelerated during the period 2006-2018 compared to the period 1971–2006. 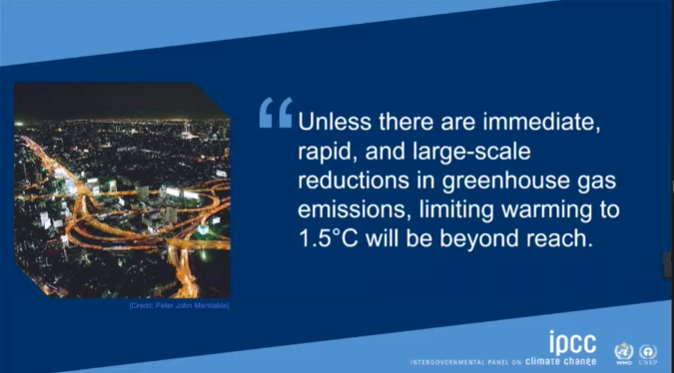 It provides new estimates of the chances of crossing the global warming level of 1.5°C in the next decades, and finds that unless there are immediate, rapid and large-scale reductions in greenhouse gas emissions, limiting warming to close to 1.5°C or even 2°C will be beyond reach.

The report shows that emissions of greenhouse gases from human activities are responsible for approximately 1.1°C during the last ten years of warming since 1850-1900. In 2020 the annual mean temperature was 1.2 C above the normal. The averaged temperature estimate over the next 20 years is expected to reach or exceed 1.5°C of warming. The Paris Agreement commits to pursue efforts to limit temperature increase to this level.

WMO State of the Global Climate 2020 report said the past six years were the warmest on record. And a Global Annual to Decadal Climate Update issued by WMO in May said that there is about a 40% chance of the annual average global temperature temporarily reaching 1.5°C above the pre-industrial level in at least one of the next five years – and these odds are increasing with time.

WMO issues annual global and regional updates on the state of the climate and on climate change indicators to political leaders and decision makers. The IPCC provides more comprehensive and detailed periodic scientific assessments concerning climate change, its implications and risks, as well as to put forward adaptation and mitigation strategies.

This IPCC report draws on major advancements in recent science - a better understanding of past warming, additional data from recent very warm years, and a more sophisticated approach to assessing the rate of future warming.

“A major advance of this report, of recent climate science, is the new information on regional climate change, both what we are seeing now and what we will see in the future with additional warming,” said Prof. Taalas.

This helps us understand how the effects of global warming play out on a regional scale, helping policymakers make more regionally informed decisions about climate, said Prof. Taalas.

The report finds that many drivers of climate impacts are projected to change in all regions of the world. Region-specific changes include intensification of tropical cyclones and extratropical storms, increases in river flooding, reductions in mean precipitation, increases in aridity and increases in fire weather. 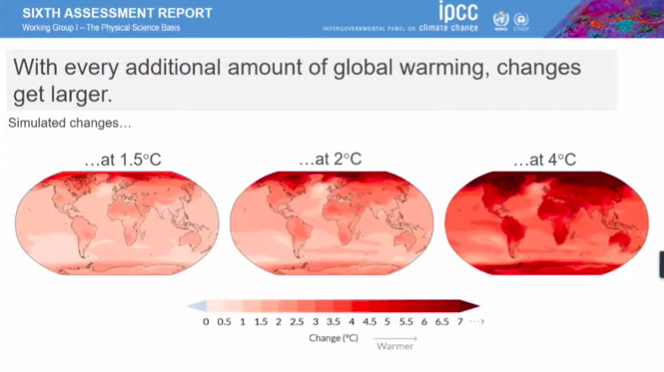 “These regional details focus the minds of governments and societies globally, on what is at stake, and why we must limit warming, to minimise these impacts, and meet the Paris Agreement goals,” said Prof. Taalas.

“Besides climate mitigation it is essential to invest in climate adaptation, since the negative trend in climate will continue for the coming decades independent of our success in mitigation. One powerful way to adapt is to invest in early warning and weather observation systems. Only half of the 193 Members of WMO have state of the art weather, climate and hydrological service capabilities. We have also major gaps in observing networks in Africa, some parts of Latin America and Pacific and Caribbean Island states, which has a major negative impact on the quality of early warning services in those areas, but also globally.”

WMO is therefore working to close data gaps and to establish a Global Basic Observing Network which is sustainably funded through a Systematic Observations Financing Facility.