It was one of the three warmest July’s The world had the third warmest July on record, with  prolonged and intense heatwaves affecting parts of Europe. Antarctic sea ice was the lowest for July on record, according to Europe’s Copernicus Climate Change Service.

July 2022 was drier than average for much of Europe, with low precipitation records broken in some countries, hitting local economies, agriculture and increasing the risk of wildfires. This unusually hot and dry weather is continuing in August.

The Copernicus Climate Change Service, which is implemented by the European Centre for Medium Range Weather Forecasts (ECMWF) publishes monthly climate bulletins reporting on the changes observed in global surface air temperature, sea ice cover and hydrological variables.  WMO uses data from ECMWF, and other internationally recognized datasets for its State of the Global Climate reports.

Globally, July 2022 was one of three warmest Julys on record, close to 0.4°C above the 1991-2020 reference period, marginally cooler than July 2019 and marginally warmer than July 2016. This is despite the weak La Niña, which is meant to have a cooling influence. Northern hemisphere land masses saw predominantly well above-average temperatures.

Temperatures measuring over 40°C were observed in parts of Portugal, Spain, France and the United Kingdom, which breached the 40°C for the first time. The Iberian Peninsula saw an unusually large number of days with maximum temperatures above 35°C, underlining the longevity of hot temperatures in this region. The Spanish national meteorological service, AEMET, said that July was the hottest month ever recorded, and the heatwave was the most intense and long-lasting (9 to 26 July) on record.

The United States of American had its third warmest July on record.  Generally, temperatures were above average and/or record-warm across nearly all of the Lower 48, with Texas having its warmest July, May-July and April-July on record. Several heat waves, with daytime temperatures over 100°F (37.8°C), occurred across much of the U.S. during July, contributing to record energy demand and heat-related illnesses, according to the U.S. National Centers for Environmental Information.

In a press conference on 18 July, WMO Secretary-General Prof. Petteri Taalas said that “this kind of heatwave is the new normal.” Heatwaves in Europe will become more frequent, more intense & will last longer. By 2050, about half of the European population may be exposed to high or very high risk of heat stress during summer, according to the Intergovernmental Panel on Climate Change.

In the southern hemisphere the most above-average temperatures were recorded in central south America and southern Africa.  The northern Pacific and in the ocean adjacent to the Antarctic Peninsula saw above average temperatures. There were below average temperatures along the western Indian Ocean, from the Horn of Africa to southern India, over much of central Asia, as well as over most of Australia, according to Copernicus Climate Change Service.

July 2022 was drier than average for much of Europe, with local low precipitation records broken in the west and drought in several locations of the southwest and southeast. These conditions affected the economy locally and facilitated spread and intensification of wildfires. France had the driest July on record, with a 85% rainfall deficit at national level, according to Météo France.

At European level, Copernicus said that precipitation, soil moisture and relative humidity were all consistently below average from the Iberian Peninsula across the continent to the Black Sea, including UK and Ireland and southern Scandinavia, and in parts of western Russia and the Caucasus. France and parts of the UK experienced the driest July based on local precipitation records. Continued, severe drought conditions, sustained by lack of precipitation and heatwaves in the past months are affecting agriculture and energy management in many areas, including the Po Valley, in northern Italy. In several locations, including Spain, Greece, and Czechia, the dry conditions facilitated the spread and intensification of wildfires.

It was also drier than average in much of North America. In the USA, historic flash flooding (parts of Missouri and Kentucky) juxtaposed heat and expanding drought. According to the August 2 U.S. Drought Monitor report, 51.4 percent of the contiguous U.S. was in drought. Severe to exceptional drought was widespread from the Great Basin to the Pacific Coast and across portions of the central and southern Plains. The wildfire season appeared to be waning across Alaska, but is still going strong across the West and southern Plains. Across all 50 states, more than 5.7 million acres have burned from January 1 through July 31 — nearly 1.5 times the average for this time of year, according to the US National Centers for Environmental Information.

Wetter-than-average conditions were especially noteworthy in eastern Russia, northern China, and a large wet band spanning from eastern Africa across Asia to northwest India, according to Copernicus Climate Change Service. It was also wetter than average over much of Scandinavia, Iceland and in regions of central and eastern Europe. Despite average precipitation, Türkiye experienced wetter soils, the legacy of June’s wetter-than-average conditions. 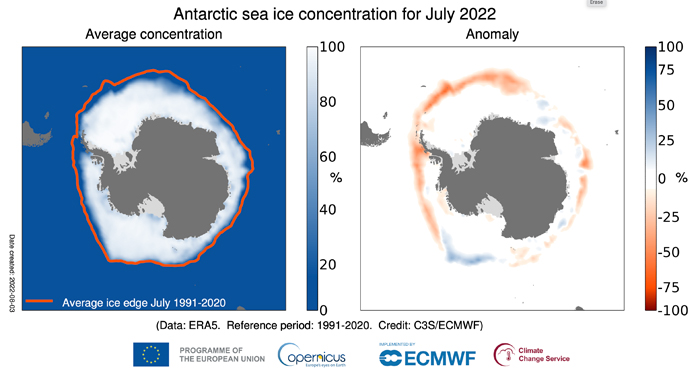 Antarctic sea ice extent reached its lowest value for July in the 44-year satellite data record,  at 15.3 million km2 on average, 1.1 million km2 (7%) below the 1991-2020 average for July and well below the previous July low. The low July 2022 value continues a series of much below-average extents observed since February 2022 - including a record low for the month of June. However, it is worth noting that Antarctic sea ice extent was above average in July 2021, which underscores the large interannual variability that has often characterised Antarctic sea ice throughout the satellite era, according to Copernicus Climate Change Service.

Arctic sea ice extent was 4% below average, ranking 12th lowest for July in the satellite record, well above the low July values seen in 2019–2021.

July’s temperature and rainfall trends are continuing in August, at least in parts of Europe, as a strong high pressure system sitting close to the United Kingdom. The UK's Met Office on 9 August issued an Amber Extreme heat warning, with temperatures expected to build through the week in the southern part of England. However, temperatures are not expected to be as extreme as those experienced in July when new national records were set.

Meteo-France says temperatures in Southern France are 3-5°C above normal for this time of year.

WMO’s regional climate monitoring centres for Europe, operated by the Deutscher Wetterdienst, has issued another updated climate watch on 8 August. This is intended to guide National Meteorological and Hydrological Services who are responsible for issuing warnings and alerts. It said there is likely to be “Above-normal temperatures (heat wave) in Iberia, western Mediterranean, Italy, France, southern United Kingdom, Central Europe, western Black Sea region within the next four weeks. Heat waves will occur temporarily with cooler periods in between. »

It also issued an updated drought guidance note said there would be below-normal precipitation in Western and Central Europe, Italy, the Balkan Peninsula and western Türkiye in the next two weeks, with absolute weekly precipitation totals will be less than 10 mm in most parts, except for short thunderstorms. It said the probability for this development in Western and Central Europe is above 80-90% for the first week and above 70-80% for the second week. « The precipitation deficits will cause or exacerbate drought conditions with risk of low water levels and forest fires,» said DWD.