Thinking about freshwater often brings to mind pictures of flowing streams and crystal clear lakes, but actually, almost all freshwater in the world (that is not frozen and locked away in ice caps and glaciers) is groundwater.

Groundwater is the water found underground in the cracks and spaces in soil, sand, and rock. It is held in aquifers—permeable water-bearing rock and/or sediment – and can be extracted through wells or bubbles up naturally through a spring or is discharged into lakes or streams. Even though it’s underground, when it does bubble up, groundwater helps to replenish and maintain levels of surface water - the bodies of water that we are used to seeing such as rivers, lakes, streams. Groundwater helps to keep our rivers free-flowing.

Groundwater is used for drinking water by close to 50 percent of the people in the United States, but its largest use is for crop irrigation and agricultural production.

One place that critically relies on groundwater is the Rio Grande- Rio Bravo (RGRB) river basin, which creates the border between Southwest Texas and Mexico. More than 16 million people in this region in both the US and Mexico depend on this resource; it accounts for 25 percent of the water that is used for irrigated agriculture and public supply in the basin.

Not just the people, but the local wildlife and the river itself also heavily rely on groundwater. In some stretches of the Rio Grande-Rio Bravo, such as the Big Bend region, more than 50 percent of the water that flows in the river comes from groundwater during the months when the river volumes get low. It’s also the main source of water for wetlands and springs, which are of critical importance for freshwater biodiversity and migratory bird conservation.

One of the main challenges to protecting groundwater is that it is, of course, underground. Groundwater levels are not easily monitored with the naked eye and so supplies can be unknowingly polluted or even overdrawn, meaning that more is taken out of the ground than can be sustainably replenished. Groundwater can be polluted by landfills, septic tanks, leaky underground gas tanks, and from overuse of fertilizers and pesticides.

The water in RGRB is critically endangered. Surface water in the basin is 150 percent overallocated and the basin’s groundwater resources are similarly overdrawn. The river itself has lost approximately 90 percent of its historic flows and has been declared one of the ten most endangered rivers, globally. Climate change and rapid population growth in border cities are putting increasing pressure on the river’s precious resources.

However, groundwater has the ability to be recharged and replenished. It can happen naturally when rain and snowmelt seeps down into the cracks and crevices beneath the land's surface, or artificially when people take action to restore groundwater levels by redirecting water so it will be reabsorbed into the ground through canals, basins, or ponds. 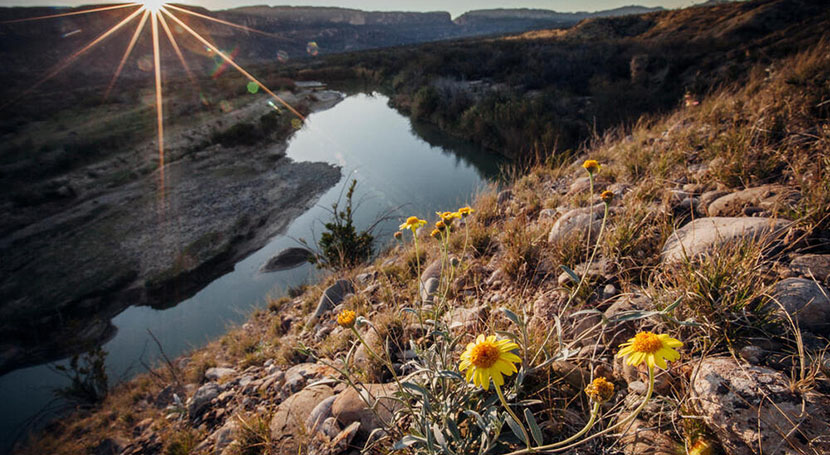 Wildflowers grow on the slopes above the Rio Grande just outside of Terlingua and Big Bend, TX.

WWF-Mexico has made progress on an Aquifer Recharge project on the Mexican portion of the RGRB. The program has created a management plan focused on rainwater capture and ground infiltration to replenish the aquifers and stabilize ongoing usage. This work is considered a nature-based solution, which is a type of intervention that is aligned with nature and can help build resilience in the face of climate change.

As climate change worsens, groundwater stores will become more and more critical to maintaining our access to safe, drinkable water. What we need now to prevent groundwater pollution in homes and cities is to ensure proper disposal of waste and chemicals, promote aquifer recharge interventions at scale, support efforts to raise awareness such as the Global Groundwater Sustainability Call to Action, and to push local, state, and federal policymakers to protect groundwater and strengthen water governance by adding measures like the Sustainable Groundwater Management Act.