World Soil Day is held annually on December 5th since 2014, the year when the UN designated the date at the request of the FAO the previous year. With the theme 'Stop soil erosion, save our future', the 2019 campaign focuses on raising awareness about the importance of sustaining healthy ecosystems and human well-being by addressing the increasing challenges in soil management.

Mainly promoted by the FAO, this day aims to raise the profile of healthy soil and encourage governments, organizations, communities and individuals around the world to engage in proactively improving soil health.

Because soil, like water, is intrinsically connected to human development. Human beings tend to think these two resources are endless, and therefore, they over-exploit them. This has serious consequences not only in the short term, it also risks the sustainability of future generations. According to the FAO, over 33% of the Earth's soils are already degraded and 90% could become degraded by 2050. 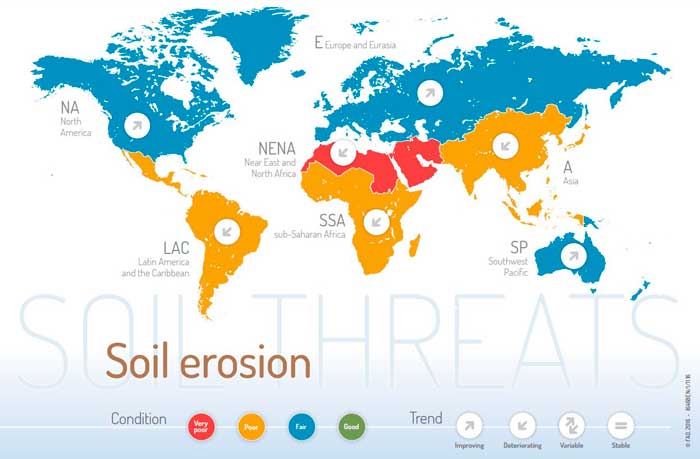 Why is soil management important?

Soil pollution is a worldwide problem that degrades our soils, poisons the food we produce in the soil, and also the water we drink and the air we breathe. Because they store and filter water, soils improve food security and our resilience to floods and droughts.

The FAO warns that soil erosion affects soil health and productivity, decreasing the amount and quality of the food we consume. In addition, soils have a key role in the supply of clean water and resilience to floods and droughts, not to mention their great potential to filter and buffer pollutants, degrading them and mitigating their negative effects.

What is soil erosion?

Soil erosion is the removal of the top most fertile soil layer from the land's surface by water and wind. It tends to be a slow process, so it may go unnoticed. But it may also occur at an alarming rate, specially due to a third factor that exacerbates the action of the two first ones: human activity (over-exploitation) has increased 10 to 40 times the rate at which erosion is occurring globally.

How many types of soil erosion are there?

Water and wind are the two main agents causing soil erosion, giving rise to different types of soil erosion. However, water is the major cause of erosion through the various ways it may come in contact with soil.

On one hand, there is rainfall and surface runoff, which lead to several kinds of water erosion:

On the other hand, there are rivers and streams:

We should note that in all stages of stream erosion, by far the most erosion occurs during times of flood, when more and faster-moving water is available to carry a larger sediment load. Considering that climate change is causing increasingly more flooding, having this World Soil Day makes all the more sense.

Aside from the different types of erosion caused by water, there is wind erosion, especially in arid and semi-arid regions, also a major source of land degradation and desertification. Another type is the mass movement caused by rock and sediments on a sloped surface due to the force of gravity. 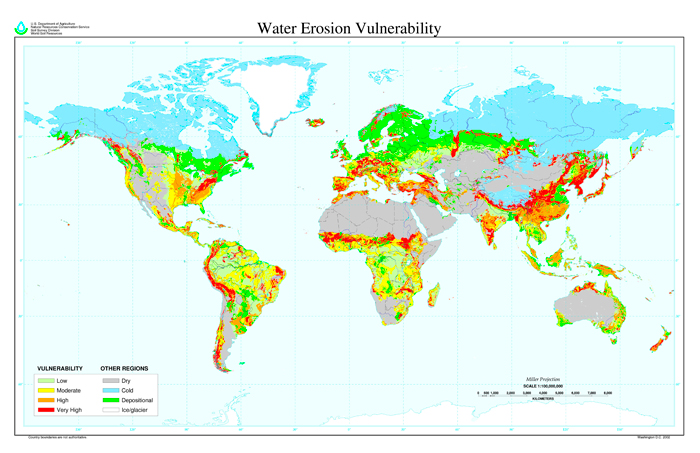 World map indicating areas that are vulnerable to high rates of water erosion.

These are just physical factors that may be beyond our control. However, human activities boost these factors and increase soil erosion. Among them, the factor that most contributes to the global increase in erosion rates is unsustainable agricultural practices.

Deforestation is also a major contributor, as it increases erosion rates due to exposure of mineral soil by removing the humus and litter layers from the soil surface, removing the vegetative cover that binds soil together, and causing heavy soil compaction from logging equipment. On the other hand, urbanisation also has major effects on erosion processes, first by denuding the land of vegetative cover, altering drainage patterns, and compacting the soil during construction; and next by covering the land in an impermeable layer of asphalt or concrete that increases the amount of surface runoff and increases surface wind speeds.