Drive to replace lead pipes leads to many contracting opportunities

We rarely stop to consider how difficult it is to be a government leader. The responsibility to identify critical needs, focus on eminent dangers, ensure public safety, and provide citizen services are monumental tasks.

Consider this: An estimated 400,000 schools and child-care facilities as well as millions of homes rely on water from toxic lead pipes daily. That poses an eminent danger, a critical need, and a public safety issue. Yet, the problem has existed for years.

According to the Environmental Protection Agency, approximately 6.5 million to 10 million lead service lines throughout the U.S. The American Jobs Plan has $45 billion in funding earmarked for replacing the country’s lead pipes, but the bill requires Congressional approval. That bill may or may not pass. With no guarantee of funding assistance, a few visionary government leaders are taking on the task themselves. Their efforts are creating a huge new marketplace with large upcoming opportunities for contractors.

Since 2016, the city of Flint has replaced 10,000 lead and galvanized pipes in response to the realization in 2014 that the water supply was severely contaminated.

City leaders in Greenville are identifying and validating the safety of 3,400 water services lines that are underwater. Funding has become available from the Michigan Department of Environment and Great Lakes & Energy. Greenville plans to prioritize the threats and begin replacing the pipes.

The city of Kalamazoo is replacing 2,000 pipe systems. A $20 million effort will begin after approvals are made and contractors are selected later this year.

Gov. Gretchen Whitmer is attempting to allocate $117 million to water infrastructure projects in 19 counties in Michigan.

City leaders in Newburgh are seeking funding to identify and replace all of the lead pipes serving the area. Approximately a quarter of the city’s 28,000 residents live in a poverty area in homes built long before the ban on lead pipes in 1986.

At least 2,900 lead service pipes need to be replaced and the first tranche of funding will be used to identify and prioritize the work that must be done as quickly as possible.

Gov. Tom Wolf has announced a large investment of funding for 25 drinking water, wastewater, and non-point source projects across a number of counties. A few of the 13 water projects and five wastewater projects are:

A 2016 study conducted by the American Water Works Association estimated that Massachusetts has more lead service lines than every state but 10. That same year, Massachusetts asked public water suppliers to complete inventory of their lead lines, but the results were totally inadequate. The few that responded stated that the pipes were installed nearly a century ago and there is little knowledge about their type or their safety ratings. In 2019, state officials launched an incentive program to replace private lines, and last year they used a federal grant to increase testing of drinking water at schools and child-care facilities.

At least 3,900 lead water pipes were discovered and another 1,800 were listed as “materials unknown.” This situation is all too common in almost every state in the country. Water distribution systems are so old, few records exist on the types of pipes that are underground.

These examples mirror ongoing efforts in numerous states. The danger associated with drinking contaminated water is very real, and time has run out for addressing the problems. Whether the bill before Congress now passes or not, funding will be found for the removal of pipelines that are delivering unsafe drinking water to millions of citizens.

Water firms with capabilities and work experience related to the removal and replacement of lead, galvanized, and contaminated water pipelines will find an extremely high demand for their services over the next decade.

Because this problem will not be fixed quickly, citizens are advised to check water purity and pipeline safety in the regions where they live or visit.

Funding is slow but always available for disaster recovery projects 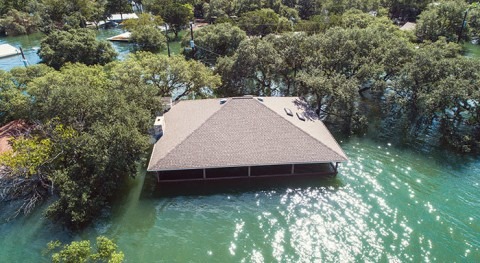