The Australia Institute analysis uses Bureau of Meteorology (BoM) data to track changes in daily temperatures that mark the beginning of each season over the sub-tropical and temperate parts of the country where most Australians live. 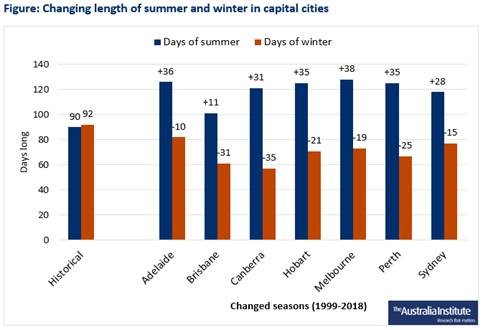 “Temperatures which were considered a regular three month summer in the 1950s, now span from early to mid-November all the way to mid-March,”said Richie Merzian, Climate & Energy Program Director at the Australia Institute.

“Following the hottest summer on record, it commonplace to hear older Australians claim summers aren’t what they use do be. And they are right.

“Our findings are not a projection of what we may see in the future. Its happening right now. Summer have grown longer even in recent years, with the last five years facing summers twice as long as their winters.

“Place such as Port Macquarie in NSW, which suffered devasting fires early in the fire season, are now experiencing seven more weeks of summer compared with the 1950s and 60s.

“As the length of the bushfire summer season extends, the window to enforce bushfire management strategies, typically in winter, shrinks.

“Global heating is already making Australian summers a longer and more dangerous ordeal than they used to be. Extreme heat events are the most fatal of all natural hazards and have been responsible for more deaths in Australia than all other natural hazards put together.

“Extended summers will have significant impacts on Australia’s tourism, construction and mining sectors, as well as impacting the everyday lives of Australians. When it comes to agriculture, extended summers can damage crops and exhaust livestock.

“Australia is currently experiencing an average of 1 degree of global warming and summers have extended by around a month. The Australian Government’s current emission reduction targets are aligned with 3 to 4 degrees of warming, which leaves young Australians facing ever lengthening summers with significant consequences.

“According to numerous modelling exercises, including those commissioned by the federal government, it is in Australia’s national interest and economic interest to put in place a strong policy to reduce emissions. The Australian Government’s current policies only serve to further fuel the climate crisis.”