Snow cover and glaciers at the Third Pole are disappearing fast as a result of global warming. A joint research team modeled the Third Pole water cycling to see what the future has in store for the region.

Their study was published in Water Resources Research.

With a high-resolution cryospheric-hydrological model covering 15 upstream basins at the Third Pole, the study warned that the time when river runoff is highest during the year (water peak) is expected to come earlier for the western part of Asia. In addition, most basins have either passed or are approaching peak glacier melt runoff (peak water), when annual glacier runoff will reach a maximum, and will only decrease after that.

"This change in seasonality as well as in peak melt runoff will inevitably disrupt the livelihoods of mountain communities as well as populations downstream, since food production, energy production as well as biodiversity depend on the amount and timing of mountain water supplies," said Sonu Khanal from FutureWater, lead author of the study.

"The shift in timing of snowmelt runoff to May from June or July varies with different climate and hydrological patterns. Basins featuring glaciers and snow will be hit hardest due to shift in peak timing on a seasonal scale," said the co-author Walter Immerzeel from Utrecht University. At the seasonal scale, the changes are mainly driven by changes in either snow or rainfall-runoff, but at the decadal scale, the responses are rather consistent and mainly driven by precipitation changes.

The study indicates that all 15 basins will see more rainfall as climatic warming reduces solid precipitation such as snow. This situation will contribute to higher peak total runoff across the board.

"However, the increase in runoff volume may not be sustainable since most basins have either passed or are approaching peak glacier melt runoff," said YAO Tandong from the Institute of Tibetan Plateau Research of the Chinese Academy of Sciences, co-author of the study. Even with only a moderate temperature increase, snowmelt runoff will decrease significantly for most of the basins toward the end of the century, resulting in less water availability for the region.

YAO is the co-chair of Third Pole Environment (TPE), an international science program that enabled data sharing for this study through its related science project of Pan-TPE. 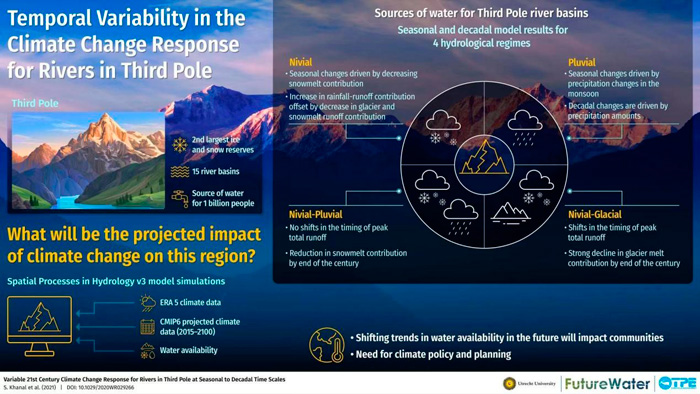