Will Bangalore be the 1st Indian City to run out of water?

Clean Water
A Young and Innovative company headquartered in Indore, India. A team motivated and driven to solve the problems of Water pollution and water scarcity.
TwitterFacebookLinkedInYoutubeWeb

Bangalore is in an extreme situation, groundwater levels in Bangalore are depleting and receding further down.

The groundwater which could be extracted at 100 ft. , 20 years back in Bangalore has now reached to depths of 1,000 ft. in Bangalore. In some areas such as Whitefield, it cannot be found at depths of 1,500 ft.

With the city growing at a much faster pace, hustled along by its technology sector, it is ripe for a water crisis. Multiplying urban patterns, Bangalore’s population nearly doubled from 5.7 million in 2001 to 10.5 million today. By 2020 more than 2 million IT professionals are expected to reside here.

Veena Srinivasan, Programme Leader – Water, Land and Society at ATREE (Ashoka Trust for Research in Ecology and the Environment) is of the opinion that the 2020 timeline is alarmist, but added that current groundwater usage in cities like Bengaluru is unsustainable.

In Bangalore, where an estimated 40% of the population is dependent on ground water for its survival, this is a major crisis.

To further aggravate the problem, the population of Bangalore is increasing at 3.5% annually.

Less than 50% of the spaces are doing rain water harvesting currently.

Water-bodies used to cover 3.4% of Bangalore. Now that has gone down to <1% 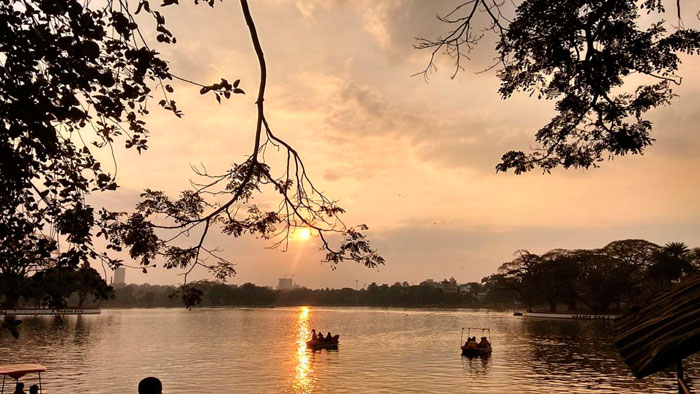 A report by the World Resources Institute (WRI India) notes that groundwater stress in and around Bengaluru is critically high as the groundwater aquifers are overexploited. Image: Wikimedia.

Bangalore is at a critical stage of water stress and moving soon towards a condition of water scarcity. To save Bangalore from this everyone from Government agencies to citizens both requires at the level of restoring and rejuvenating the resource as well as networking with nodal agencies to manage the water well and form a sustained environment for future.

Urban Waters Bengaluru are trying to dig a million wells in Bengaluru to enable capturing rainwater and ground water recharge. Let’s hope this mission is successful and can save Bengaluru in time.

Jordan releases an app for water and sanitation services
END_OF_DOCUMENT_TOKEN_TO_BE_REPLACED