A recent study examines the link between power structures and vulnerability to flash floods in Reshun. The vulnerable location of Reshun, a village in Upper Chitral District in the northwest of Pakistan, leaves it exposed to natural disaster hazards. It sits along the seismically active Hindu Kush mountain range — and at the base of a drainage stream for the massive Chitral glaciers. While the risk of glacial flooding is regional, the vulnerabilities among Reshun’s residents are far from equal, according to study authors Ishaq Khan and Inam Ullah Leghari, a graduate student and professor at the Department of Anthropology at Quaid-i-Azam University in Islamabad.

Members of Chitral’s lowest serf class, cheermuzh, have long lived in stark marginalization. Now as glacial floods in Reshun grow more frequent due to climate change, low-income residents with little access to political power are left increasingly without options. The floods disproportionately devastate cheermuzh communities, and aid has been insufficient. As Hamna Tariq, a junior fellow in the South Asia program at the Stimson Center, told GlacierHub, “They tough it out, until they cannot.”

Outside the polar regions, Pakistan is one of the world’s major centers of glacial ice. Over 7,000 known glaciers lie within its borders and more than 500 of these glaciers are in the remote Chitral valley. The entire area is at risk of glacial lake outburst floods (GLOFs), which are outpours of meltwater caused by glacial dam failure. However, exposure to GLOFs is highly varied and determined by one’s social status. 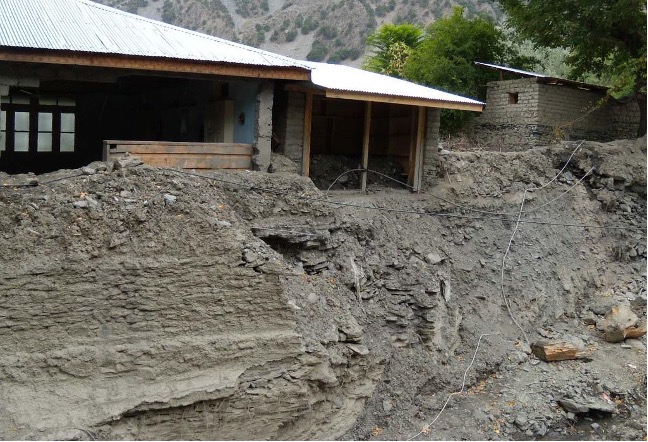 Damaged homes in the aftermath of the 2013 Reshun floods. The floods caused two casualties and damaged 39 homes. Source: groundreporter/Creative Commons.

Chitral society is divided into four classes — the highest of which is “adamzade” (proper human), and the lowest of which is a serf class, cheermuzh, often referred to as “beizzat” (without respect) and “ghalamus” (slave). True to a serfdom-like system, upper classes grant land to cheermuzh to live and farm on, which they retain by providing services to their landlords. This hierarchy is not just functional, but reflective of social attitudes toward low-status residents; a Chitral resident of lordly descent opposed the construction of a water pipe in his village on the grounds that he could not drink the same water as cheermuzh.

The impacts of the 2013 and 2015 flash floods, in particular, illustrate their disproportionate effect on low-status residents. Khan and Leghari found that the 2013 Reshun flood’s damage was concentrated in three mostly cheermuzh hamlets —Panandeh, Batikandeh, and Golguch. Only families in these hamlets lost their homes or livestock, an important food source and financial asset. There were 23 fully damaged and 16 partially damaged houses. The flooding also destroyed the hamlets’ drinking water supply line and the bridges connecting them to evacuation routes.

Though these low-status residents were stranded, help didn’t come for days. Aid workers were even instructed not to go into the hamlets as a precautionary measure. One resident, Ashraf Khan, told the study authors how he and his family were forced to spend one week outside, unaided and unsheltered, after their home was destroyed.

Two years later, the flash floods were even worse. Nearly 100 houses were fully damaged, 86 of which belonged to low-status households, including Khan’s. His family was one of 30 low-status households whose homes were destroyed twice, in both 2013 and 2015. As mentioned in the study, all of these households had rebuilt their homes in the same place, as they had nowhere else to live. On the other hand, five households whose homes were destroyed in the 2013 flood and who could afford to move elsewhere were unaffected in 2015. 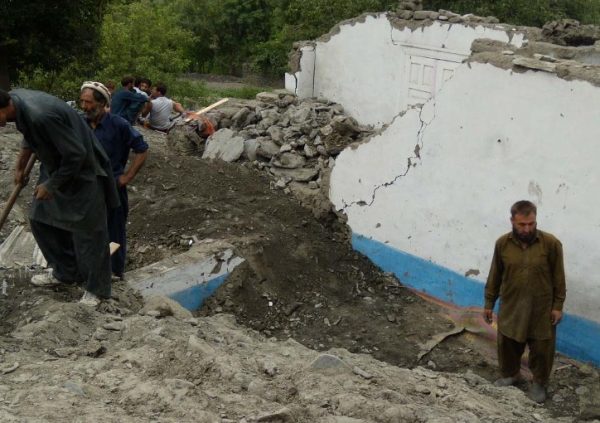 The 2015 flood also completely washed away the road connecting the three hamlets to the main road. “Flash flood isolated us from the rest of the world,” said another resident, Sher Muhammad, who was quoted in the study. Now, not only were cheermuzh socially marginalized, but they were also physically isolated.

Muhammad is also involved in Golguch’s anti-grazing movement. As glacial lake outburst floods have become more frequent, goat grazing near Reshun’s nearby glaciers has become a controversial issue. According to anti-grazers, grazing intensifies flooding by breaking the soil surrounding the nearby glaciers. Khan, the graduate student who co-authored the article, wrote to GlacierHub that grazing is “mostly supported by lordly families,” who are not at the highest risk of flooding, while opponents of grazing are mostly from low-status backgrounds. This divide is indicative of the class-based vulnerabilities to GLOFs and the tensions that have risen as a result.

Without any prospect that GLOFs will subside in a warming climate, Reshun’s cheermuzh residents are left without many options. Writing to GlacierHub, Hamna Tariq highlighted the need for government aid: “Granted these regions are nestled between dangerous landscapes, more can still be done like providing better warning systems, immediate flood relief aid, temporary housing, and employment opportunities.”

The article’s authors, Ishaq and Leghari, emphasize the importance of addressing power structures in addition to the floods. They write that “the effectiveness of mitigation and relief programs for such communities can only be achieved if the political structure of the past and its perpetual effect could be understood.”

As the study illustrates, Reshun residents like Ashraf Khan and Sher Muhammad face the severe dangers of glacial flooding due to no fault of their own, but as a result of their socioeconomic marginalization. The paper’s conclusions affirm the need not only to address GLOF-related impacts, but also the class inequities that create these unequal vulnerabilities. Failing to address this two-fold crisis is to fail these residents and all others at the frontlines of climate change. 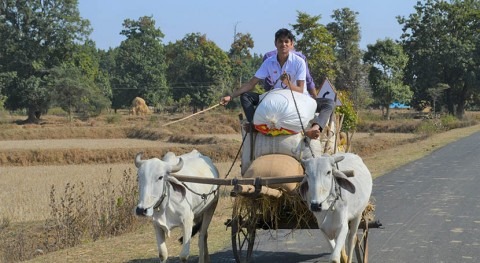